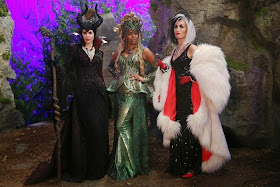 Our opening flashback has the Sorcerers apprentice consulting a swirling ball of psychedelic light, presumably the sorcerer, to try and undo the whole cursing a baby with evilness thing. There’s absolutely nothing the sorcerer can do to fix that so the best they can do is keep the author locked up forever so he never pulls such shenanigans again

And since he’s been released that doesn’t point to the sorcerer’s apprentice doing a very good job. The Author, Isaac, is all sad about Cruella dying but it’s all part of Gold’s plan- they can’t create the proper ink until Emma goes all dark for the heinous crime of stopping magical, gun toting serial killers from holding her child at the edge of a cliff.

Cut to the good guys and Emma is both angry and regretful for killing the evil gun-toting magical murderess who was threatening her child (did I ever mention that I’m not a fan of the moral compass of this show?) And Maleficient joins the party. Cruella dying has left her without a great deal of faith in Gold’s intentions (Regina is awesomely gleeful at her old hero leaving Gold’s thrall). Since Emma is good at finding people (back in the days when she actually worked, it was her job) she wants Emma to find her daughter, Lily.

She also points out that leaving town and Gold’s influence may not actually be a bad thing when it comes to hindering Gold. Maleficent tells Emma what she knows about her daughter – and Emma is shocked because she’s already met her.

This calls for an Emma childhood flashback to where Emma, happily living with a kind family meets Lily again – asking for help. Emma welcomes her as a friend in her now perfect life, albeit not happy with Lily telling somewhat changed stories of their past – and even less happy when she realises from a news report that Lily is wanted for armed robbery.

Emma is horrified and Lily’s explanation does seem to hint at magical darkness “every decision that I make is wrong”. Emma demands Lily leaves but she won’t without the stuff she has stashed at her squat, including a necklace from her birth mother. She needs Emma to get it for her so she can avoid her boyfriend.

But while Emma is going looking for Lily’s necklace, Lily steals her foster father’s engagement ring. And the lies Lily told and Emma backed were exposed. As the parents grow more outraged, her foster dad makes an unfortunate comment about “our children” which doesn’t include Emma – and Emma leaves.

Lily tries to recruit Emma for a life on the road, while Emma is furious at Lily destroying the family she almost had – she attacks Lily for pretending to be a runaway for fun when it’s Emma’s real life. But Lily has been kicked out – her whole life falling apart since she left Emma, she considers herself cursed. She begs Emma for help - and Emma rejects her.

In the present there is, of course, only one person Emma could discuss this with – Regina. Regina points out that fate, woo-woo or whatever works in mysterious ways (hence her adopting the Saviour’s son). Regina has a plan – since she has to save Robin and Emma needs to find Lily, how about an out of town road trip? When Emma tries to turn down the offer of a “babysitter”, Regina awesomely points out she needs help – she’s hardly left Storybrooke before, someone who knows the big city would help.

A Regina and Emma road trip? Yes. Yes. Yes. Sign me up!

Of course, Gold is sure this will all work towards his dark master plan. But first, Gold pays a visit to the pawn shop where we just see Belle leave after kissing Will. Will doesn’t cower, but his fighting talk is… lacking (“I’ll warn you, I’m scrappy”). He still knows to step backwards after making a comment about stealing Belle’s heart. Gold demands Will steal Belle’s heart where Maleficent is guarding it for Regina.

Maleficent gets a visit from the worst people in the world – the Charmings. Oh Maleficent, please eat them. Please. Maleficent doesn’t really care about their apologies – especially since they should be directed to Lily, a complete innocent. While the Charmings mouth assurances about making it up to Lily, Maleficent reminds them, while they’ve been threatening about Gold turning Emma into a monster, they forgot that that’s exactly what they did to Lily.

Gold visits next to distract Maleficent with talk of how Lily will keep Emma on the dark path while Will sneaks in the back to steal the heart.

He shows the heart to Belle and Gold arrives to try sweet words and returning her heart – and bowing out to Will, saying he is the one to protect her heart because Gold has recognised he is unworthy.

Emma and Regina make their goodbyes (Emma is still all sulky and silent treatment with her parents) and off they go to Lowell, Massachusetts which Regina is duly snarky about. There a neighbour tells them Lily died in a car accident. The guy keeps saying nasty things about Lily so Emma nearly punches him.

Regina pokes Emma about it though Emma denies it’s her going dark – it’s guilt. Lily’s dark and unpleasant life she blames on herself – or rather on her parents putting all her potential darkness into Lily. Discussion interrupted by a random near car accident which is very familiar – Emma is definitely sensing fate even while Regina snarks the idea (she snarks everything but oh how well she does it. Fate seems to have it- because the waitress “Starla” in the diner turns out to be Lily.

Emma talks to Lily who, understandably, isn’t all that convinced by talk of fate. She’s also not especially eager to have Emma insert herself into her life (with a packet of condescension to boot) or her family.

Emma doesn’t take the hint and goes to Lily’s home and breaks in. There they find no sign of a child or husband – but they do find an investigation board looking for Storybrooke with notes on Maleficent and the Evil Queen and Emma – and her parents in Fairy Tale guise. Emma assumes she wants revenge

Which makes it extra bad when they hear Lily run off with Emma’s car – and the scroll to get back into Storybrooke. Emma goes from “we have to help Lily!” to “AAAARGH WE MUST STOP HER!” while Regina desperately tries to get her to calm down and see sense. Emma is extra harsh with Regina in her utter refusal to look beyond attacking Lily.

Time for a dangerous car chase and a confrontation. When Lily suggests hurting the Charmings, Emma punches her to the ground. Lily fights back and reminds us all what terrible people the Charmings are who deserve to be punished (yes yes yes!). Ominously, them fighting causes thunder and lightning and glass to shatter. Emma pulls a gun, telling Lily she’s trying to stop her doing something she’ll regret but Lily counters “thanks to you I’m hardwired for bad decisions.” She adds that if Emma lets her go, she will destroy everything

Regina steps in with an awesome speech and Emma lowers the gun. Oh for a brief moment, you almost had me there, Once Upon a Time.

We have another flashback to Lily on a bus – and the Sorcerer’s apprentice explaining everything to her.

In the present Emma and Lily briefly talk with Emma objecting to Lily calling herself the “anti-saviour” but Regina hears that Gold got Belle’s heart back so they have to save Robin now. Emma invites Lily along.

To Robin at New York to tell him about Marian/Zelena. Of course it’s a pretty hard sell and Zelena/Marion denies everything. Luckily even when Robin is denying Regina and saying he’s with Marion, Zelena reveals herself… but Robin can’t leave, because Zelena is pregnant.

I’m glad to see Maleficent didn’t pull her punches with the Charmings, especially after Emma’s “zomg you LIIIIIIIED!” silent treatment. I still think Maleficent should have eaten them but I imagine they taste very very very bland.

Lily is hunting down the Charmings! Quick, someone get her a big knife! No, an axe! Can we set up a Lily cheerleading squad?

Now this? This road to darkness makes sense. It makes even more sense because it rides on her parent’s crime. Lily was innocent, she was victimised, she was cursed – she’s a much more morally ambiguous target than Cruella was. How far can Emma go to stop her, what lines can she cross?  Especially when she has every reason to seek revenge against Mary Margaret and David? All displayed in a storyline

Still, if Emma has the potential to go dark now, even with the spell cast on her as a baby, then presumably so to does Lily have the power to turn light?

Gold, Will and Belle. I recognise the nobility and true love of Gold realising Will makes her happy and that he is grossly unworthy of Belle, that he has done unforgiveable things and he can never expect to be back with her. I get that and think it’s a powerful moment and a reminder that even evil, conniving Gold still loves Belle AND that loving her isn’t enough to make up for everything else. However, there was still an element of Gold passing Belle on to another man, transferring ownership and/or giving Belle and Will permission

Robin/Zelena/pregnancy – devious woman traps man with pregnancy after rape by deception? No, we do not need this storyline. No no no no no no. Because absolutely none of it will be treated the way it deserves! Back to the Emma/Regina road trip!