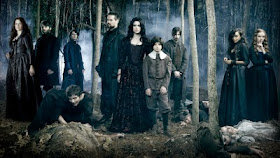 Mary is rather disturbed that she was magically attacked in her own bath as she shares with Tituba. Tituba naturally assumes it’s the same person who killed Corwin – though Mary realises the attacker didn’t want her dead since if they did she would be. She also turns her suspicion on Tituba (and assumes it’s a Hive member attacking her) though Tituba insists she’s always done what was best for Mary (ok that’s a little bit of a stretch). She does point out that she always gave great advice – to kill Mercy and Anne – especially since Anne is becoming a super witch.

Mary, of course, rather ignores her and instead tells Tituba to see the seer Petras for answers.

She finds his body (John killed him) so decides to eat his eyes. Because Salem.

The plague is still ravaging the town and John uses a plague doctor’s mask to go around unnoticed. He releases those locked up under accusations of witchcraft and leaves Corwin’s body in their place. The return of Cotton is much more noticed - he is quickly seen by the new magistrate, Hawthorne. Hawthorne is a not a fan of Cotton and the feeling is mutual.

The drunken Cotton goes on to meet Wainwright who takes a moment to mock the study of pointless theology before belatedly remembering his manners. Once he’s polite he and Cotton can geek about the Royal society – though Cotton is a little sad and mortified to hear everyone thought the evidence he presented of a witch-malformed foetus was supposed to be comic. Poor Cotton though he still insists the disease is a witch pox

Wainwright does tell Cotton that he thinks Isaac was the first person afflicted by the plague (and is duly derisive of Isaac being branded as a fornicator) only to find Isaac missing from his sick room. Isaac has left his stuff behind, including a large sum of gold and the Malum (much to Cotton’s horror). Wainwright isn’t interested in babbling about witches and focuses on developing his inoculation

Isaac is now being held by Mercy as part of her vengeance campaign against Mary. Whatever she has planned for Isaac involves a sharp knife – and makes Dolly cringe and apologise to him. She begs Mercy to stop as she cuts and abuses Isaac, pointing out that Isaac is one of them - one of the abused and abandoned of Salem. Mercy just hits her – she beats her until Isaac begs her to stop.

Meanwhile Mary drags in Anne to an interview to scold her about her uncontrolled magic and make it clear other witches think she should kill Anne. But she offers her training instead – to become an “ally” (or pet) rather than a rabid, uncontrolled animal. The first step of that involves Mary groping Anne while she imagines Cotton doing it. She also gives Anne her Book of Shadows – her own personal grimoire, to be a completely unreadable log of her life while alive and to return to the Coven when she dies. Mary has a full library of the grimoires of Essex witches; and she knew Anne’s father died because his book joined the library.

She tells Anne how to write the book and summon her familiar. That night she does so and gains a mouse familiar – but also pledges to use her powers for good.

Cotton goes to see Mary about the Malum, fixing everything and how his father was totally wrong about everything (including Mary being a witch… oops). They both talk about their grief for John who they think is dead, Mary crying for him and confessing her love.

Wainwright and Hawthorne are joined by Mary examining Corwin’s body (Hawthorne worries about Mary’s delicate eyes which she duly scoffs). Mary is quick to take advantage – a gaol break and murdered selectman and Hawthorne’s first day as Magistrate! Oh and isn’t it telling that Hawthorne’s competitor is the one who was murdered.

Mary joins Wainwright for more flirting over the corpse so she can distract him while Tituba slices off Corwin’s finger. Mary leaves after a lot of groping and finger sucking.

With the finger (the unsucked, severed finger that is) Tituba and Mary cast a spell to find where Corwin’s murderer was – Knocker’s Hole (where John is hiding – along with a lot of poor people dying of plague). They follow it all the way to John – but he grabs the convenient woo-woo the Native Americans  gave him to make him invisible to witches, though the longer her maintains it the more difficult and painful it is (he grows weird blue veins across his skin), but he can hide in plain sight in the same room as Mary. When he finally takes off the pouch when she leaves, he collapses.

While there, Mary also identifies the well that Countess Marburg used to attack her and plans to use Anne to perform a ritual to protect her. She brings Anne for the ritual but Anne objects because she’s claustrophobic and can’t go down the well and because it involves drowning a creature. Mary counters that Anne must face her fears and that no creature is innocent. In the end she has to use magic to threaten to drown Anne to make her agree.

Mary drops Anne in the well – and then pulls a grid across the top. Swimming in the well water and panicking, Anne completes the spell, drowning a kitten in the process. At which point the water hag comes up through the water and repeatedly dunks Anne under. Between drowning she manages to gasp out the spell and seal the well, banishing the hag.

At home, Anne adds to her grimoire, not realising that Mary has enchanted it to create a duplicate she can read – including revealing the hag spoke with the voice of the Countess Marburg.

Time for same more flirting between Wainwright and Mary (he’s miffed that she’s applying the quarantine to him largely because she made up a fake outbreak to clear the streets). He’s duly distracted when she challenges/invites him to her bedroom – on to bondage and him on his knees performing oral sex.

John goes to see Cotton and then punches him. Probably because Cotton is wallowing in his daddy issues again.

One interesting element of Wainwright and his story of the Royal society is it adds some historical context since one of the reasons Salem is so remembered is that even at the time many people were so duly sceptical – by 1692 a lot of witch hysteria was dying out (especially in urban and more developed areas of Europe) to such an extent that witchcraft was considered to be openly laughable in some lofty circles. While a lot of Wainwright’s opinions feel anachronistic, at least a few are indicators of the fact he isn’t from rather insular and superstitious puritan town and has a more “modern” or worldly view – hence his contempt for the “benighted bigots” of Salem

Anne swearing “I will do no harm” is interesting. On the one hand, along with hereditary witchcraft, it raises the possibility of magic that isn’t dark and evil and linked to the devil which season 1 was completely saturated with and didn’t seem to include any alternatives. Unless we accept witches are born evil. It also points towards a witch using her magic for good. I’m also curious about the choice of working, not too far from the commonly used Wiccan Rede which makes me wonder if the writers intend to draw upon Wicca for the series. And, if so, given the series previous performance, will this be a cause for all Wiccans to yell “DEAR GODDESS NOOOOOOO!!!!?!”

Mary’s groping of Anne – Salem has done this before, edged towards the idea that some of these witches are bisexual, then hurries back and keeps overt sexuality to between opposite sexes (even here, Cotton featured heavily). There’s always an ulterior, woo-woo element to the potentially sexual scenes between women and, frankly, it reeks of being a metaphor for Mary corrupting Anne.