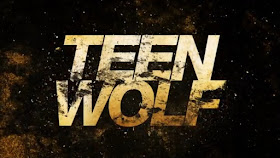 Scott is attacked by one of the Dread Doctors while in the middle of an asthma attack (I think Scott did have Asthma before he became a werewolf) to be rescued by Malia and Melissa (might an medical care) before they run to a lift.

Apparently this is a consequence of reading that book.

Now to the night-time sports ground full of holes. Either they’ve been attacked by weremoles or lots more chimera have been buried.

Stiles realises the Dread Doctors went to a whole lot of effort to get these teenagers –including a jailbreak, so why these kids?

Parrish continues to train Lydia how to fight. And flirting, of course. Interrupted by Lydia having Dread Doctor’s memories.

Theo and Scott are on the look out for more mysterious chimera – people acting strange (remember Theo is the bad guy. Also they’re looking for people acting strange in Beacon Hills). And the whole gang gathers for a Dread Doctor’s book club though side effects may include hallucinations and killing sprees. Still an easier book to read than some I have

We also learn that Lydia’s mother doesn’t remember her Kanima experience because of the Dread Doctor’s memory shenanigans. Lydia also tell them she thinks the Doctors may have messed with her.

The read, it doesn’t seem to be very riveting read. 0.5 fang I think. Stiles is also still trying to hide the whole Donovan death thing from super-sensed Malia. But then she’s trying to hide her recent Desert Wolf vision as well.

In the end they all end up falling asleep rather than reading (0.5 fangs, definitely), except Theo who is evil. Kira also talks in Japanese in her sleep – which Theo records.

School the next day for more paranoia, memory musings and electricity shenanigans. And a whole lot of worry about random students being chimera. I don’t think evil teachers openly revelling in their students leaving their oh-so-difficult course are Chimera but she should be eaten anyway.

Lydia’s kindness towards another student leads to a creepy vision. A really really really creepy vision – or possibly a memory – of child Lydia finding her mother over the body of a woman who has drilled into her own head. The woman was her grandmother (another Banshee) in Eichen house

Scott and Theo find her all passed out and she tells them she did have a bad memory flashback but not a relevant one. Which is when Natalie arrives and Lydia tells her she just fainted (this isn’t the Victorian age, just fainting isn’t a thing that can be brushed off).

Mason catches up with Kira who is still having problems with the book (and confirms that she doesn’t speak Japanese or Korean) – Mason shares his research into Japanese folklore an Kitsune which basically amounts to Kitsune suck at language and why she can’t read the book which is one big language trick.

Evil teacher actually tries to talk Scott out of dropping her class because she gets off on cruel head games. And Scott has an asthma attack/memory thing about being attacked by a dog as a child. Liam manages to find an inhaler for Liam and gets him to take it with glowing wolfy eyes.

Theo checks on Scott and he puts his asthma attack down to being a rising memory. Theo tells Scott about Kira’s Japanese sleep-speaking and plays the recording: which translates as “I am the messenger of death.” Probably a bad sign. Scott tells Theo about the foxy aura which is a bad idea – and this is making him wary of Kira. Especially since the electricity is acting up and something is happening in the basement.

Down there they find ripped out wires – not Kira woo-woo acting up.

Lydia now thinks that her memories of the Dread Doctors are actually all false and it’s her Banshee powers kicking in – she has a vision of someone else being Dread Doctored.

So she and Stiles go to check up on the vision in a closed floor of the hospital – and Stiles has his own memory vision. Of his mother, Claudia’s, fear and horror of being in the hospital with her mental illness (she’s a Stilinski and has a NAME? Stilinskis don’t have names). Part of which manifests from thinking her 10 year old son is trying to kill her – and she attacks him.

While Lydia hears and ECG repeatedly say the name “Hayden” in a very spooky voice. And then she gets a terrible vision of their experiments.

We have a Chimera chewing on electric wires. Nom nom nom.

And Scott returns to the opening scene, having an asthma attack, facing a dread doctor before Melissa and Malia intervene.

At the club, Liam is still trying to impress Hayden. Or appease her. Or something. Not something I care about. More flirting/hostility/nonsense the next day at various sports practice.
Mason reveals the old silly grudge between the two. We also learn Hayden is on some kind of medication. Which makes Liam feel more guilty about costing her money and more determined to pay her back – the meds are for a kidney transplant she had and she works so her sister doesn’t have to pay the full cost of the meds

Of course she’s also being screwed by her employer who takes half her tips and money because all of his employees are underaged so can’t complain. He also checks her eyes and sees they glow. So she may be supernatural or possibly a chimera.

Theo also flirts, much more effectively, with Malia since his flirting method is to get shirtless and show is impressive body off while working out. This is a very effective method and much approved of. She wants to know why he hasn’t told everyone about her Desert Wolf memory. Malia doesn’t like his caginess. And she shows she seems to be stronger than him.

I will have another weekly dose of my “Parrish and Lydia is creepy, don’t do it!”.

Melissa screamed… and it was loud. It could have been a dramatic scream but it kind of looked supernatural

I really don’t have much else to say beyond enjoying the plot and story and not having a lot to complain about. I do think it’s worth noting in passing that Kira doesn’t speak Korean and Japanese – I think one of the prevalent memes we have in the West of anyone who is POC is that they must be foreign on some level and, almost inherently, must be multi-lingual because of that. With an extra side of random assumptions about what language they should speak (even Kira pointed out that she’s half-Korean so it’s not just Japanese everyone should note she doesn’t speak). It’s interesting to have a character who is a POC, is a child of immigrants but also breaks that assumption of speaking several languages.