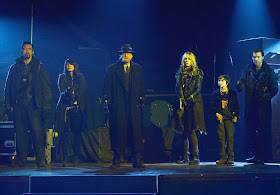 Bolivar is moving the Master’s resting mud – and he and his minions are slaughtering a few cops along the way. Eichorst and Bolivar go to see Palmer, much to Marchand’s surprise and nerves. Eichorst isn’t impressed at how close Abraham got to Palmer so he’s now having Bolivar play bodyguard and minder. And he doesn’t get to say no.

It does give Palmer chance to question Bolivar about how much of his personality remains while he’s a vampire – apparently most of it.

Marchand is a good judge of character and is not thrilled with them working with Eichorst and Bolivar – Palmer admits they’re pretty bad but wants to shield her.

Meanwhile Nora and Ethan celebrate a breakthrough – their plaguey thing does kill vampires. A little too well – the vampire dies so quickly it will hardly have chance to infect others.

Abraham has his own project – killing a vampire and bottling some goo and worms. He boils the worms, processes them and then drips the white goo into his eyes. As we’ve seen with Palmer, vampire goo can greatly increase vitality and health without being infectious.

When Nora finds him he is unconscious and bleeding through his eyes – she uses CPR on him and manages to rouse him. He deflects and questions and, later is clearly much healthier. He continues to deflect her and Nora adamantly refuses to be stonewalled in such a fashion – she deserves better. He confesses to her that he consumes the worms to maintain his health – the implication being this isn’t the first time. He points out he’s 94 years old and in very good health because of the worms.

She looks pretty horrified but he’s clear that he will do whatever it takes to face the Master – he won’t “fade as a weak old man.” Nora thanks him for telling her and walks away.

Vasily and Dutch continue their plan of securing an ever widening area – including creating warning posters and planning to seal the subway with explosions – to stop new people entering Manhattan and being infected. Explosions make Vasily and Dutch hot

And Zach has disappeared. I supposed I should pretend to care. They find him before he finds his vampiric mother (he intended to walk the dark streets looking for her. This kid has a good chance to be an object lesson in survival of the fittest). While looking for Zach, Dutch sees a “missing” poster for Nikki – her ex and room mate.

Vasily and Dutch go to plan destroying the station – but Vasily does say he’ll help Dutch find Nikki for “closure.” Which means going to Nikki’s mother who is the one posting the posters – she hasn’t seen Nikki but she takes the chance to say what a terribad person Dutch is who completely destroyed her daughter, sucking the life from her.

In tears Dutch leaves to Vasily who comforts her and kisses her and they have sex in the van.

Ephraim decides to show Zach their plague plan. Zach continues to refer to the vampires as humans. We get some parent angst from Ephraim and then Zach decides to destroy all their work so Ephraim does the parental thing and drags him close to their imprisoned vampire so he can see how nasty and deadly it is. Forcing him to see what his mother is before Nora intervenes in this stellar parenting.

Which leaves Ephraim to drink and taunt his imprisoned vampire so he can try and taunt the Master. He promises to kill himself and his son before they become vampires. Oh Ephraim, promises, promises.

Quinlan trains Gus in the art of vampire slaying, including killing them in close combat. Quinlan’s plan is to kidnap Eldtritch Palmer (on account of having a very evil name).

They manage to infiltrate the building – but Palmer has UV security system to fight Quinlan’s vampires. They are destroyed – leaving only Gus to survive and flee.

Now over to Fitzwilliam, Palmer’s erstwhile employee, who goes through the rigid and pretty racist security checks to reach Staten island (the security is clearly focused on stopping vampires

He goes to see his brother there who has, apparently, never been a fan of Palmer. Also on Staten Island is Feraldo, the arse kicking council woman, who declares Staten island to be plague-free. Complete with utterly brutal beheaded vampires on display. The mayor is kind of forced to applaud the barbarity because everyone else celebrates.

Still he realises how effective it is – and asks her to do the same thing for the rest of the city, he wants her to be a champion for the whole city. She agrees – but she wants total, unquestioned command. The mayor agrees, so long as he gets to pretend to be in on it.

Zach can be eaten by a vampire any time now. And Ephraim. There is no good in this family.

I was glad that this show remembered that Dutch is bisexual and we had some acknowledgement of her relationship with Nikki (and I am glad it became overt after so much euphemism dancing). But her relationship did seem to be completely toxic so we have to see where this goes. I also had a vague feeling that every time we had some acknowledgement that Dutch and Nikki where a thing, she had to hump Vasily’s leg.

I worry about the number of parallel storylines this show now has – it risks becoming crowded.