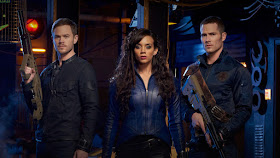 So last week everyone agreed to kill Khylen – and this week John has found a staticy image from the neural link Khylen embedded in Dutch’s neck.

When it goes down, D’avin distracts the very tense Dutch with target practice and tries to talk about her feelings and past – her urge to find her own past which is what Khylen knows. While John, very unwisely, decides the best way to figure out how the neural link works is to plug it into his own neck.

They return to find John in pain, not seeing anything and unable to use it. Time to go to Westerley and Pawter to pull it out. Despite being arrested last episode, Pawter is there for the surgery (she tells them she was arrested and the information she found about Dr. Jaeger – she got out by lying through her teeth).

In the extraction the neural link is broken – John runs after Dutch apologising profusely. Which leaves D’avin to speak to Pawter – she is annoyed he was ducking her calls, he thought they were personal and was basically trying to leave a relationship (if they can call what they had a relationship) without saying goodbye which she, rightfully, calls arsholeish. At the same time D’avin points out she entered a sexual relationship with a patient she was treating for mental trauma which is rather more than arseholish, which she acknowledges.

She does give him the location of a man called Grayson who Jaeger was treating and who filed a complaint – he’s in Westerley Mental Institution.

So it’s time to break in with electrical shenanigans and a drugged guard. They speak to Grayson who agrees to take them to see Jaeger if they can bring him along. They agree.

To a floating space station thing known as Utopia which involves dress up and going under cover.. This involves lots of leather and vinyl. It’s a place where you can basically buy anything even if it is illegal so long as you wear appropriate fetish wear (standards! Got to have a dress code). D’avin and Dutch flirt with D’avin taking some fun narcotics and he worries about what truths Jaeger may have for him – and whether he wants to hear it. The drugs kick in and he kisses Dutch – and she kisses him back. The world cannot contain my “NOOOOOOOOOOOOO!”

John takes the chance to speak to a woman about the neural thingy they broke. She agrees to help fix it so long as she gets to keep the chip after they’ve finished.

The gang gather when Grayson finds Dr. Jaeger – or, rather, Dr. Jaeger’s assistant. She now implants memories for clients so they can live new experiences. Johnny steals her data so that when they go to Westerley they can have Pawter look it over.

But on Westerley they’re attacked by guards, even after showing RAC agent IDs. See, “kidnapping” Grayson had no warrant attached. Naught naughty. They take Dutch in to prison. There she is greeted by the high ranking family official Delle, they’ve met before who calls Dutch “Yelena.” Dutch’s real name. She agrees to drop all charges – if Dutch will owe them a nice off-the-books favour in the future. Dutch agrees to play – but she also wants Jaeger, Dutch knows her worth.

Delle agrees and they end up in a nice company black site to finally meet the elusive Dr. Jaeger. She claims she just took his memories after he killed his squad during a psychotic break – it’s all they did and that’s what he asked for. This is just all a standard army cover up – and Jaeger seems super helpful. D’avin asks for the memories to be restored – though Jaeger can’t understand why he’d want that and even John and Dutch are very wary about that. Dutch confronts D’avin about him using his memories as self-punishment. He hits back that she doesn’t understand to which Dutch throws her whole horrible assassin past back at him.

Which is what John finds and quickly backs away.

After sex, Dutch and John have some cutesey post-sex talk to which she also adds that she was married and a warrior princess but in a joking cryptic way. They’d also rather not have Johnny find out – which is a bit late.

While Dutch finds that out, D’avin has a memory nose bleed moment (probably instigated by Jaeger) and attacks Dutch. They fight and Dutch spends way too much time trying to get away and not enough time smacking him repeatedly.

She runs and hides. He says he has a mission, as a good soldier, to hurt her. And she promptly beats him into unconsciousness.

John is in Pyree’s bar pouring out his angst – Pyree calls jealousy but John points out both D’avin and Dutch are family to him – so it’s like his brother and sister are having sex. He has hand gestures as well which causes Pyree to also have a drink. He also realises this is going to badly derail their professional relationship – which means the relationship won’t work and it will break up and he will have to pick a side. Naturally, Dutch’s.

John comes back and Dutch tells him what happened. John has denial – but Dutch quickly realises it’s Jaeger behind it. She goes to find that out while John guards his brother. And smacks him – because attacking Dutch is a major no-no. He tries to get through to his brother. It doesn’t work – and John gets stabbed by his “good soldier” brother. Show, you kill John and we’ll have issues.

John gasps to Lucy but only incomplete instructions – so she decides to take it into her own hands to find help (because Lucy loves John, we’ve established this). She manages to get Pawter who uses her medical skills AND her powerful family name to call for help.

Except Jaeger is already on the run and has barriers prepared to stop Dutch tearing them all into itty bitty pieces. In case we’ve missed it, Dutch and Jaeger exposition what they did to D’avin – create perfect weapons, soldiers they could control who would then forget what they did. This is also why D’avin had a kill warrant on him – because he kept hunting her. Dutch also has a nifty shield breaking gizmo.

Jaeger begs – because there’s something big and dark coming to the Quad. Dutch has them turn off D’avin’s fighty rage. Then to save D’avin she offers Jaeger a choice: memory wipe or being shot. Jaeger chooses being shot so Dutch wipes her memory (I believe this may be more vindictiveness than unwillingness to kill.

John goes into surgery and recovers – though D’avin has MAXIMUM ANGST. Killing his squad pales a little next to attacking Dutch and nearly killing John, especially since he remembers everything. D’avin begs Dutch to understand it wasn’t him – she understands that. But she also knows it WAS her (what, smacking D’avin? Her past? I need some clarity here)

While I hate D’avin and Dutch hooking up – I also hate it for every single reason that John hates it – and I’m immensely happy to have all my objections vocalised on the show along with John’s problem with how he’s going to have to deal with this, the pieces he’ll have to pick up and  the terrible pieces afterwards.

What I didn’t like was Dutch hiding from D’avin. I get hiding from him – to protect him. Everything we’ve seen so far makes it clear that D’avin vs Dutch results in D’avin being splattered on the walls. So why should she be panicky while hiding? She should be calm and confident and sad – not afraid. Amusingly it even makes it clear because when Dutch actually fights D’avin there’s no question of who is the better fighter.