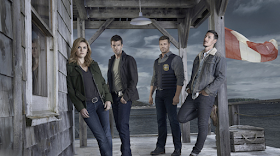 Now we’re questioning Dave about the Croatoan killings – he killed Charlotte and there’s a good chance he killed the Colorado Kid, James Cogan (the son of Nathan time travelling and Audrey when she was in her past incarnation of Sarah).

Is Dave even physically capable of overpowering Charlotte?

So time to question Dave about everything he remembers about both murders – he remembers a woman and a Thinny when he killed the Colorado Kid, even though the Thinnies were supposed to be all closed. They need to get into the void to get a “controller” in order to build the New Barn – something they need to do without Charlotte…

They don’t find the Thinny, so they need to find the unknown woman from 30 years ago. And the only way to do that is time travel

It says a lot about Haven that all of this actually makes perfect sense
Stewart Mosely has a time travel Trouble (they’ve used it before for much confusing drama one season) and, armed with a sketch from Vince and Dave, they can go find this mysterious woman.

Audrey can’t go back because she was/is immune to the Time Travel Trouble, so it’s Nathan (who went back before and was the father to the Colorado Kid) and Vince since he actually remembers 1983

So 1983 on the right day, that was easy. Of course Nathan gets distracted by his now-dead dad – who is with Lucy (a past incarnation of Audrey). Nathan pretends to be an FBI agent to ask questions about the woman in the sketch but he should have known this was a bad idea: Lucy knows the woman (Barbara Coulton) is Troubled and doesn’t want FBI attention. Especially since this day is the day Lucy enters the barn. So lots of distracting – especially since Nathan messes up within minutes of arriving and uses a local Haven term which makes his dad all suspicious.

Lucy is sent to distract Nathan which causes some tension when they touch – she sends a warning to Barbara to get out of town.

So she’s panicking and ready to leave when Nathan finds her (and notices she’s wearing a ring, like his and Audrey’s and Charlotte’s) – and she runs through a hole in the air she creates, teleporting outside – only when his dad, Garland, arrives and points a gun at him because his record has completely fallen apart. Yes, his cover lasted about 2 hours before he has to tell his dad who he really is. Of course there’s an easy test – Nathan doesn’t feel anything.

Nathan thinks the ring Barbara wears changes her work through space Trouble into a Thinny creating Trouble which is just what they need. Garland has also heard about the end-the-Troubles forever if she kills the person she loves, James, her son. Garland never told Lucy this but she’s conveniently listening in to this conversation

Unfortunately, Nathan wants to talk daddy-son issues rather than “oh, if you do that the Barn will kill everyone who is Troubled” which, y’know, may have been useful information. He does fill in the gaps – but only after he realises Lucy has left.

Vince similarly fails instantly trying to convince then-Dave he’s someone else. Dave recognises him despite the passing decades. So both of them lose their cover within minutes. Vince is trying to get Dave out of Haven asap – but Dave is stubborn. So Vince tells him pretty much everything about Croatoan possessing him – at least it’s convincing.

Lucy arrives to ask Dave if it’s worth sacrificing anything to end the Troubles – and asks for Dave’s gun. The example of her courage inspires Dave not to run but to stay and face Croatoan and kill him

Lucy meets James on the beach so they can walk and she can murder him after being all touching and sad. She prepares to shoot him and Nathan stops her with the line “James is our son.” Lucy doesn’t wait any time to be all grabby over Nathan – and Nathan has to tell her that, no, he’s not here to save anyone.

They stand aside and watch Vince and Dace try to shoot through Barbara’s portal – it doesn’t work and Dave is dragged through the thinny. He come out, possessed and moves on James. Nathan desperately stops Lucy from intervening, saving her son and changing the future (hey, the future sucks – make with the changing!)

They watch as Dave kills James by pulling black aether out of his eyes and then throwing some kind of woo-woo at the gathered crowds before Croatoan leaves Dave.

Nathan now decides it’s time to go home… wait, did they get the Thinnies? Did they achieve anything? Wait? What?

Back to the present and, apparently, just knowing Barbara had the ring is enough information for them – so long as they can get the ring to one of Barbara’s family, the Coltons.

Outside of Haven, Duke is ambushed – by people who know his old identities, so people who remember him despite the Haven memory wipe. The sinister men are apparently not from the government but do like their ominous silences.

Someone arrives in a scary helicopter I think I may be supposed to recognise him. Apparently a kid called Saul who we saw through all the flashbacks as a child. Apparently he has been stalking Duke for 3 decades but he has no idea why because of the whole Haven whammy. He finally gives Duke a letter

Did it have to be this dramatic?

It’s a letter from Nathan in 1983 – asking Duke to find a Colton to bring them to Haven. And that would be Hayley and her ability to walk through walls.

Nathan and Vince fail at time travel. How they can be this terribly bad at knowing how people would react. Especially since if anyone was willing to believe time travel, it would be these people. Especially since them trying to keep secrets just had them reveal ALL THE THINGS!

Y’know, having Duke hang around Haven and only leave the town when he needed to track down Hayley would have been much much much much more sensible than him randomly abandoning the entire town, a 3 decade stalking from a guy who doesn’t even know why he is stalking and a time travelling letter.