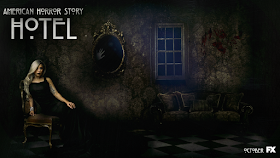 And since we’re approaching a kind of hiatus it’s time for American Horror Story to take all of their many many storylines and smoosh them together until they kind of fit together – like an inpatient toddler trying to ram lego bricks together.

They start with a suicide pact (after seeing a desperate, sad and highly emotional suicide pact in the hotel which deeply moves Liz) deciding that everything is shit and there’s nothing good left in this world. Iris has finally realised her relationship with Donovan is not even close to healthy while Liz has decided that she cannot go on without Tristan. Before Liz does anything dramatic, Iris steps in to remind her that people who die in the hotel with unresolved issues then get to haunt it forever more. This is something more people should remember.  Liz’s unresolved issue is the son she’s left behind

So they invite him up (by throwing cleaning products at Hazel who has gone from eccentrically amusing to kind of unpleasantly tropey with her obsession with cleaning all the things) to visit. And this could go wrong, this could go so very very wrong. Especially since American Horror Story has such a terrible terrible terrible history of with LGBT people

But it’s surprisingly sweet and gentle and kind and good and accepting and really emotional and… not awful. Yes, American Horror Story and “not awful” placed together in an extremely unexpected way. It shocked me too

With Liz now having a wonderful accepting family and an actual future she has a reason to live. And she convinces Iris to step back from her own suicide montage plans – and for them to forget a future together.

Now, alas, to the other pointless characters who are polluting this series

Here we have Detective John the serial killer randomly killing people for funsies because why not. Sally is still there “supporting him” in his serial killing adventures. Which makes her all bitter and angry and plotting terribad revenge when John reunites with Alex

Yes, vampire and her vampire child Holden meet up with serial killer John and they decide to reunite by Not Talking About Anything. The vampirism, their vampire kiddie, their abandoned child Scarlett (oh, I tell a lie, they briefly acknowledge that they’re the worst parents in the world for about 2 seconds before going back to completely ignoring the daughter they’ve completely abandoned in favour of the son they’re both obsessed with). They briefly decide to round up a lost plot link (rounding up all the evil vampire kids and throwing them in he locked floor of the hotel along with Ramona, another discarded plot line and character. How this show managed to convince an actor of this quality to play a glorified extra).

Sally is all pissy about John abandoning her and will, no doubt, have some revenge for the future since she’s sure poor Alex won’t accept his serial killerness (which is, obviously, just a character flaw all tolerant people will deal with). I don’t care but no doubt we’ll be subjected to this more in the future.

Now we have the Countess and her trainwreck of a love life.

Firstly, Will Drake is still around because the Countess forgot about the whole haunted hotel thing and how dead people tend to hang around. How very careless. She still tells the ghost how she intends to gain all his money by killing his son. No doubt this will become a thing when the show returns

She invites Natasha around to roll around on the bed and murder her - because we want to well and truly make it clear that any hint of her interest in another woman was just a means to her REAL interest – the man, of course.

Donovan has also pretty much figured that out and gone to kill Rudy. While his motives are pretty clear, the show still feels the need to vocalise it clearly – the Countess, pining after Rudy, has created a series of men to try and copy him – Donovan is just one of many. So he’s decided to kill the original and then offer himself to the Countess in the name of “love”.

Of course if she does murder him he’ll end up haunting the hotel forever. Why does everyone forget this?

I do admit to being amused by the whole bringing a knife to a gun fight thing, but it’s been done.

Back to the main characters – having convinced Iris that she has a lot to live for with her epic speech, Liz and Iris load up with guns, raid the Countesses apartment and shoot them both

I’d be excited by this except it’s the ghost hotel. If they die, they will come back. Why does everyone continue forgetting this? Is it really that hard to remember?