The Librarians Season Two, Episode Five: And the Hollow Men 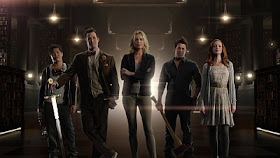 This episode begins in mid caper. The Librarians are looking for the the Eye of Zarathustra. This artifact is important because it is the first artifact to appear in public since the library started going wonky. Things are going smoothly until a suit or armor starts to move.  Eve goes all guardian like to take the suit out and it turns out that Flynn is the wearer.  Flynn had put on the suit to hunt down the eye to stop if from falling into the hands of Prospero.  You would think that having not seen each other in awhile that the meeting would be nicer but Eve is still massively pissed that Flynn just took off and did his solo thing, refusing to accept that he is now part of a group.  Flynn tries sweet talking Eve but she's clearly not having it.   It's not long before Flynn and Eve figure out that the fact that everyone is all in the same room must be a trick.  Someone uses the Pipes of Pan to put everyone asleep.

When the group wakes up, Flynn is gone, along with the the Eye of Zarathustra. The Librarians use a communication device to talk to Flynn.  Flynn finds himself in a room without windows with the walls covered with pictures of the Librarians - in short, a stalkers wet dream.  Flynn has been taken by a very powerful creature and so he uses a Chinese system of telegraphy. Heaven forbid Flynn be ordinary and just use Morse Code.

The library is increasingly unstable causing the other Librarians to worry but they are determined to get Flynn back.  They manage to track the signal but by the time they arrive, Flynn has already gone on a road trip with his kidnapper.  Jenkins tells the crew to get as many artifacts as they can.  Before the Librarians can leave however, Moriarty shows up at his charming best.  Moriarty wastes no time flirting with Eve who he calls Duchess. I actually think that Moriarty and Eve have far more chemistry than Eve and Flynn.  The Librarians go running for the portal and all of them make it except for Eve.

Flynn and Ray pause on their roadtrip for milkshakes.  Ray reveals that he missing memories and is certain that Flynn will be able to help him.  When Ray collapses from a debilitating headache, Flynn somehow figures out that the reason Flynn is missing memories and has headaches is because he is actually the living embodiment of the library.  One really has to make a leap of faith on this one because Flynn essentially pulled this deduction out of his arse.

Eve looks around determined to find a way to go after Flynn, when Moriarty catches up with her.  It seems that Moriarty is looking for the staff of knowledge and suggests a temporary truce because they both need to find Flynn.  Eve is not ready to trust Moriarty though he is pouring on the charm. Moriarty suggests that if Eve cannot trust him, she can at least trust his self interest because he wants to find the staff to free himself from Prospero.

Flynn is in full geektastic mode now that he realises that he is the first Librarian to have a chance to actually speak to the Library. Flynn is full of questions but because Ray (read: the library) has lost his memory, he cannot answer any of Flynn's questions.


At the Library things aren't going well.  Jenkins is certain that the library is dying.  He has the crew use special light bulbs collected from theaters to keep the library running, hoping that Flynn and Eve will find the answer before they reach the point of no return. Cassandra is certain that Jenkins is not telling them the whole story about how tenuous the situation there are in is.

With every passing moment, Ray becomes more anxious and desperate to find the Temple of Zarathustra. They head into a wooded area to find the tree of knowledge. The moment Flynn finds the temple, it's Indiana Jones rip off time, as Ray and Flynn make their way through the booby traps.

Moriarty and Eve catch up with Flynn and Ray and Flynn is shocked to see that Eve is willing to work with Moriarty.  While the three bicker, Ray seizes his opportunity to grab the staff of knowledge.  Everything starts to flood back to him.

In the library, the last of the light bulbs begin to go out.  The librarians learn that Jenkins back up plan is to send them away before that happens and then to allow the Library to feed off of him because he is an immortal.  Cassandra goes all team spirit and refuses to leave Jenkins alone but Ezekiel naturally wants to book it.

Things have reached a crises point when Eve, Flynn and Ray return to the Library.  Flynn walks with Ray into another room and is clearly sad that he didn't get more of a chance to talk with Ray.  Ray calls Flynn his best friend and assures Flynn that he will always be there. It's a bittersweet moment when Ray gives up his human body and becomes the library again.

Flynn heads back to see to Eve to report that he has been ordered by Ray to find Prospero.  Eve agrees that this is a mission that needs to be undertaken; however, she does not agree that Flynn needs to do this alone.  Flynn claims that this is the only way he knows how to operate and Eve makes it clear that this time, he will not be getting a kiss goodbye. I guess this means that their romantic relationship is on the rocks but frankly, I could care less because I think that they make an awkward couple. I would rather see Moriarty redeemed and he and Eve hooking up.