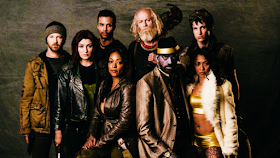 Kurian is about to inject Vasquez and Warren tells La Reina that she doesn't trust Kurian.  Warren points out that the way to find out if one's food is poisoned, is to have the cook taste it first.  La Reina orders Kurian to take the first shot and he tries to weasel out of it but being surrounded by Zeros, he has no choice. Once injected, the Zeros decide to test Kurian by having him place his hand in a box with a zombie head.  Kurian screams when he is bitten but doesn't change. La Reina is suitably impressed and orders Warren injected next - an honour for saving her life.  Murphy finally puts down the popcorn and requests the honour of injecting Warren himself because Warren has saved his life countless times.  Murphy takes the needle and fakes giving Warren the shot. Escorpion is adamant that Warren and her people cannot be trusted and points out that Warren brought the assassin. Escorpion asks for more time with Vasquez and La Reina agrees.  With that done, Kurian proceeds to inject the rest of the Zeros including La Reina. La Reina then orders Kurian and Murphy to make more of the vaccine.

Vasquez is taken away and tied up again and Escorpion beats him.  Vasquez finally tells Escorpion that he wasn't trying to kill La Reina and was in fact trying to kill Escorpion.  Vasquez adds that Escorpion killed his wife and his little girl. Unsurprisingly,  because Escorpion has killed so many people, he doesn't instantly remember Vasquez's family. Escorpion however says that he should have killed Vasquez as well. Escorpion wonders why Warren is there because what Vasquez said only explains his presence.  Vasquez decides that he is done talking and adds that Escorpion will never take anything from him again.  Vasquez finds himself placed in a cage with a zombie and Escorpion argues that they are exactly the same.

Back in the lab, Kurian is running around furiously.  Kurian informs Murphy that the Zeros are now Murphy's new army, though the plan was not for him to get injected. It seems that Kurian has been busy trying to create an antidote to the shot he gave himself.  Murphy then tests his power on Kurian and forces him to drop the antidote on the ground and step on the needle.

It's girl time for La Reina and Warren, and they share a shot of expensive tequila.  They toast to the end of the apocalypse and the return of humankind.  La Reina reveals that unlike her former husband, what she wants is a new world.

Warren makes her way to the lab and finds Murphy in control of Kurian and enjoying the power.  Murphy reveals that Kurian is building him an army.  Warren questions if Murphy is going to California and Murphy says that if he does, he will be going with an army that he controls. Warren invokes Cassandra, so Murphy points out that he didn't let Warren get injected because he likes Warren just the way she is.  A disgusted Warren leaves to find the others, ordering Murphy to stay where he is.


Warren heads to find the group and gives them a heads up as to what Murphy is up to.  Warren however is adamant that they are still going to California, even if they have to take Murphy by force. Warren wants to get out of here before Murphy gains control of the Zeros and grab Vasquez on the way. Doc has some reservations about Vasquez, pointing out that Vasquez almost got them killed. Warren is certain that emotion got the better of Vasquez but argues that Vasquez would come for any of them.  Yeah, I don't know if I agree with Warren on that one.  It wasn't that long ago that he was championing the idea of leaving 10K behind.

Still in cage, Vasquez listens as Escorpion talks about the first person he saw die.  Escopion argues that they all have an apocalypse. La Reina has sent a messenger for Escorpion, so he leaves Vasquez in a cage.

An escort arrives for Warren and she issues last minute instructions to Addy, 10K and Doc.

Escorpion tells La Reina that Warren and Co were all a part of a United States military operation to kill La Reina and take over their operation.  Escoprion lies and claims that Warren is the head of the plot.  Warren admits to being a lieutenant in the national guard before the apocalypse and adds that all she wanted to do was to get Murphy to a lab to make a vaccine. Warren then brings up Vasquez's bid for revenge but is cut short when Escoprion points a gold gun at her.  Fortunately, Murphy's mind control power has started to work and and he forced La Reina to order Escorpion grabbed by the other Zeros.  A desperate Escorpion threatens to kill Warren for messing with La Reina's mind. La Reina orders Warren to kill Escopion and Warren turns to Murphy and tells him that she won't do this and that they are done.  Murphy is loving his power and tells Warren that if she is not part of the solution. she is part of the problem.  Warren orders Escorpion to take her to Vasquez if he wants to live.

Dr. Kurian who is looking the worse for wear enters the room.  Murphy has to push him away.  La Reina takes Kurian's place and Murphy has his hands full ordering all of the Zeros away.  To distract them, Murphy cuts his hand and the Zeros drop to the ground to lap up the drops of blood.

In the torture area, the Zero's are starting to act weird, so 10K and Addy take them out quickly.  They then free Vasquez from the cage and Vasquez lunges at Escorpion.  Warren has to hold Vasquez back and Doc imprisons Escorpion in the zombie cage.

Murphy tosses Kurian into the lab and all Kurian is interested in is getting more of Murphy's blood. Murphy shakes Kurian off like a dog and Warren arrives in time to behead  Kurian.  Seeing that his options are limited, Murphy agrees to go with Warren to California.  Murphy actually takes the time to change his clothing before taking off with the crew.

In the lab, Doctor Kurian's head opens its eyes and is questioned by La Reina as to the whereabouts of Murphy.

In the tunnels, 10K and Doc help Vasquez through the tunnels. The crew is being pursued by La Reina and the crew of infatuated Murphy Zeros.  Doc decides to let the real zombies in to fight the Zeros but is unable to get the door open.  Murphy uses his zombie power to free the zombies and sets them loose on La Reina.  In the confusion, one of the Zeros drops Kurians head. The crew race through the tunnel and Warren turns to wait on Murphy, certain that Murphy will follow her.

Doc, Addy, 10k and Vasquez reach the hatch and since the zombies are all in the tunnels the way is clear.

Murphy is broken up about having to turn the zombies on the  Zeros.  Murphy and Warren make their way to the hatch and are pursued by zombies.  They manage to climb up to the ground level safely. They don't get far because they are confronted by Escorpion, who says that no one disrespects him and lives.  Escorpion actually challenges them to a fight and Vasquez steps up to the plate.  The crew watches as Vasquez and Escorpion battle it out.  10K announces that he can shoot Escorpion but Warren tells 10K to hold off, as Escorpion very nearly beats Vasquez to death. Vasquez is tormented by memories of his murdered family. As Vasquez gains the upper hand, Murphy hears the zombies in the tunnel.  Vasquez tosses Escorpion into the tunnel where he is promptly eaten by the zombies.

The crew walk off with Warren and Doc supporting Vasquez.  The crew then find the Zeros El Caminos and take off racing down the road.  In the air, 10K spies a drone and opens his door and uses a sling shot to take it out.  The road sign indicates that they are only 2 miles away from California.

In the tunnel, La Reina picks up Kurian's head.

Well we finally have some closure with Vasquez's story.  He has finally vanquished Escorpion.  I do wonder if they are going to continue Vasquez's torment because though Escorpion is dead it does not bring back family. People often find that they feel just as empty if not more after a killer of their loved one dies.  I don't know if Z Nation is that deep but it's the road that they should go down.

I found the exchange between Escorpion and Vasquez about how they ended up on opposite sides of the law interesting.  For Escorpion, his world was shattered long before the zombie apocalypse. Sometimes people head down a road through no choice of their own.  I also like Escoprion asking about Vasquez's moral purity now that they are living in an apocalypse.  Clearly he has had to do things to survive that he otherwise would not have done.

I knew that the Zero's would end up zombies but I am thankful that their time as slaves was short lived given what happened with Cassandra.

Where Murphy really stands continues to be a problem. Clearly he is very disturbed about having to sacrifice the zombies they come across. The team doesn't seem to very sympathetic to Murphy's dilemma. He's not quite human but he is not quite zombie either. Warren clearly thought that wanting a zombie gang was all about power tripping but Murphy has made it clear that he is terrified of what the scientists will do to him once they are in California. It's a reasonable fear considering that he was experimented on against his will.  The zombie army is clearly about protecting Murphy from his fears. Now that the group are only a few miles away from California, I suspect that everything will come to a head in the next episode.