Supernatural, Season 11, Episode 11: Into The Mystery 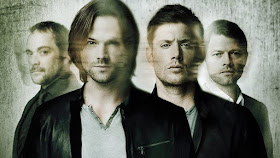 This week we had a monster of the week episode which was kind of fun. I think that Supernatural does well to have some of these on a regular basis even if I would call it filler on most other series. Supernatural is so damn long – 11 seasons now – and so often uses GREAT BIG META that it really needs these random monster missions in order to remind us that the brothers are hunters, to hold on to the core of the show. They are hunters, not people who come back from the dead so often they could start a thousand new religions in between saving and imperilling the world. These stories remind us they are hunters, they are doing good things and are generally out there fighting the good fight

It leaves me little to say about the plot – the standard happens: monster, red herring, research, kill.

The introduction of Eileen was good – she’s a deaf hunter who wants to bring down the Banshee who killer her parents (with requisite “revenge won’t save you” speech which we always always always got. Seriously the genre needs to just copy and paste that and stop pretending it’s new). She is physically capable (unusual for any representation of disabled characters), she is knowledgeable about Banshee ways (she is not only equipped but shows Sam and Dean some of the skills she has for taking down the Banshee) and she (aided by Mildred) is the one who actually kills the Banshee. It was also nice to see a capable, skilled female character who didn’t need to be taught by Sam and Dean

And she lives. Yes I did expect her to become a corpse. She was a good character, capable and on part with Sam and Dean.

But the flip side and why I’m uncertain is would this be seen as fun and cute if she WEREN’T seen as inherently sexless and completely non-sexually-threatening. If she was seen as a valid sexual person making advances on someone who was uninterested would it be seen as cute?

We also have Lucifer in Castiel’s body – and my doubts are settled, he is DEFINITELY pulling this off. Creepy and fun and very different – he’s doing it well. And, after randomly murdering an angel (who can tell instantly he’s Lucifer) showing all his very dramatic power. He also uses his hidden identity to get Dean to admit about the bond with Amarra – and his attraction (which gets Dean exactly the look he deserves). Lucifel plans to use Dean as bait, of course.

Throughout the episode we get two main threads – Sam is all angsty because of what Lucifer said to him, especially the part about abandoning Dean in Purgatory though Dean is clear he’s over that focusing on his co-dependent “we’re together now that’s what counts.”

And something is up with Dean – the Banshee only targets “the vulnerable” which apparently includes him.