The Magicians, Season 1, episode 2: The Source of Magic 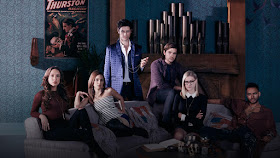 After the bug creature attack – known rather imaginatively as “The Beast” of last week, we get the aftermath. Between Kady throwing battle magic, the Dean giving a watch to Qunetin and Alice doing something crafty they managed to make the bug creature flee. But then boss lady Professor Pearl does some investigating because she knows that the only way the bug man could have got through the school’s wards is if someone did something very unwise.

Lots of stress follows – Alice and Quentin both freak out because the idea of being expelled is terrible for them. Alice needs to find out what happened to her brother (and we learn, through some friendship bonding with Margot, that Alice basically got into the school from sheer awesomeness rather than actually passing the exams). Quentin is supported by Elliot who continually tries to comfort Quentin’s fears and guilt (including a past story of his own accidentally murdering someone as well as pointing out little magical disasters are not unknown at the school).

Margot and Elliot seem to be the background oh-so-amusing supportive friends without any real roles to play.

Quentin also takes a break to talk about how his fantasy books are totally real because the author of the Fillory series had lots of people disappear around him. Quentin that just means your favourite author was a serial killer who is good at hiding the bodies.

Penny has his own issues since he thinks the voice in his head is actually the Beast – which means he’s been lied to and manipulated all this time. He wants to leave school but, when Kady convinces him to stay, he apparently throws Quentin under the bus instead.

Faced with memory wipe and expulsion at least Quentin realises how shoddy his treatment of and dismissal of Julia was last episode. Because he wants something from her. But baby steps I guess.

Quentin also decides to zap Penny with battle magic which, like everything he seems to do, goes spectacularly wrong. Luckily for him the mind-wiping woman is Eliza, one of the cryptic figures from the first episode, who is duly cryptic and ominous. She talks about Fillory which is totally-real-but-we’re-not-going-to-say-it. Also this means big ominous shit is coming and that’s a shame because Quentin isn’t special or destined for greatness or a hero in anyway. Hey this would be a great message if she didn’t turn round and basically say he’s still the Chosen One. I think I’m happier with a Chosen One who is super skilled and dedicated and smart than a Chosen One who is just Chosen BECAUSE REASONS. Penny has shown more interesting skills and smarts and Alice is amazing in comparison – but CHOSEN ONE.

Anyway he’s just on probation. And because this woman just loves to contradict herself, she also urges him “not to stay on the garden path” (i.e. don’t play it safe). Which is the opposite to what everyone else has been telling him.

She visits the Dean who is terribly injured and surprisingly not dead and he’s all pissy because he thinks it’s her job to get out there and do shit – alas she cannot. She can only train the Chosen one to be all Chosen and shiny.

Now to the story I care about – Julia is taken by Pete to meet his fellow “Hedge Witches” where she is introduced to other newbie, Marina. They don’t get on. The Hedge Witches definitely have a harsh initiation process – the next stage involves Marina and Julia being forced into a giant freezer and forced to find a way out and not to freeze to death. Not freezing to death means Julia has to find a spell in a body bag and then rip open a convenient human corpse (puppetted by Pete) for ingredients showing how ruthless and determined she is. And then she takes the door off its hinges – showing that she realises magic doesn’t solve all problems

Y’know, I actually think the Hedge Witches’ methods produce a much scarier and more practical class of Magicians. Oh sure it’s dangerous – but remember the school managed to lose and entire year of students so it’s not exactly safe

But we do have to point out that we now have one Black character horribly mauled in a hospital bed, and a Black corpse being ripped up for spell parts. It’s something when inclusion can be improved by “a Black character who isn’t mangled”.

So how does Marina get all her shinies? It turns out she is making Kady steal things from the school – and it doesn’t look like it’s amicable.