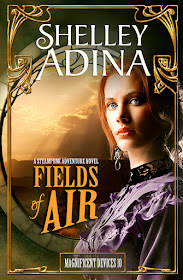 Gloria Meredith-Astor has inherited an extremely wealth and successful munitions company, one that is set to make a vast profit off a potential future war
And she doesn’t want it – not the munitions and certainly not the war. She is determined to turn her guns into ploughshares and she adamantly will not allow a war to be fought because of the weapons her company created, no matter what erstwhile family members wish.
If she has to hare off across the continent and ambush a train to stop it – then so be it.
This is one of those series that always makes me smile when there’s another book out – and this book is no exception
The series has a semi-shifting protagonist and this time it’s Gloria Merriweather-Astor. Now, I can’t say she’s one of my favourite protagonists, but I’ve always liked the idea of her, as I’ve said before. I like the idea of her because it would have been so easy, so very very very easy, in any other series to make her the villain. I probably wouldn’t have even criticised it if she were because there are so many other excellent and awesome female characters in this series, that having a single vapid/immoral/damn fool cardboard cutout villain would not have ruffled the waters
But that is not this series, that is not what this series does. So, I loved Gloria for that – for turning out to be brave and dedicated and awesome and full of morality and integrity even in the face of extreme pressure when she could just as easily have been a villain. But I am also interested in her because she is very different from the others. To a degree all the other protagonists have been misfits. They’ve not fit in the world they’ve been in – whether it’s Claire’s ambition and sudden poverty or the Mopsies rising from poverty to high society or Alice living among the raiders – they’ve all followed a different path because they haven’t had much choice in the matter. But Gloria has everything going for her – she’s the heiress to a rich, doting father who fully intends her to take over his company (despite him being evil and despite her being female). She has wealth, power, prestige, influence and she is also quite capable of realising any ambition she may have without every doing anything other than what is expected of her. She’s not like any of the other protagonist who must fight for what they want, their career, the life they choose, the family they value – Gloria doesn’t have any hard choices she HAS to make
But she makes them anyway. She makes hard choices because they’re right, because of principle, because of morality perhaps even out of a need to change her family and her business’s legacy: but Gloria’s is ultimately the most unselfish path and that is unexpected.
I expected a board room drama with this book – which would have been very different – but it was another fun, swashbuckling adventure only perhaps a little more buckled and a little less swash. After the original plan doesn’t quite go as planned a lot of the book is spent recouping with characters going their various ways. I think this makes the book less action packed and adventury than previous ones and not as fast paced – but it is more character focused. This isn’t a criticism, it’s a note of difference and probably a good one at that. We’ve had several books to get to know the Mopsies and Claire, while Gloria and even Alice have been more peripheral. With their voices totally dominating this book, we needed time to explore them. And it was an excellent opportunity to do so by putting them in desperate, lost situations and showing them think and work and try to find a way out
What I do find a little curious is how this book ends… because it doesn’t. I feel like the story finished half way through which felt a little confusing. It wasn’t a natural break, nothing was resolved: it left the book feeling abrupt and unfinished
It did end with several interesting elements – we had some excellent development of the Royal Kingdom of Spain, their development, their history and culture and how different they are form what we’ve seen so far. I always appreciate some nice world building. We have some excellent potential with Las Brujahs, especially if it tries to develop some element of native culture. I think this is especially important since the series has not had great POC inclusion so far, just the odd character, it would be nice to see the treatment of race match the ongoing awesome treatment of gender (which includes, in this book, not just the awesome main characters, but also several non-shamed eminently capable sex workers). It would also be nice to see some LGBT characters.
I am left with a cliffhanger – which does leave me eager for the next book. But also kind of frustrated with how this one ended. After all, I’m always eager for another Magnificent devices novel, I don’t need a cliffhanger!