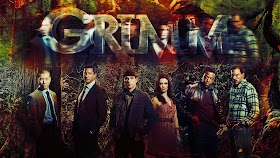 "Only you shall not eat the
blood; you shall pour it out
on the earth like water."

Okay, first off I have to say, thank you Grimm for shirtless Renard.  You still haven't given him something significant to do and this storyline has been dragged on for far too long but I can tolerate more if I get a bit of shirtless Renard every week.

So, Meisner wants to know if Nick and the rest of the scoobies are down with combining forces to take down Black Claw. Was it me, or did Nick seem to think that this wasn't a bad idea?  Thankfully, the rest of the scoobies are not particularly willing to jump without a lot more information.  They know that things are bad but the enemy of my enemy is my friend approach, is not something they're willing to jump into, even if Truble has dived right in.  I like that both Hank and Wu both told Nick to slow his roll and made the valid point that they don't really know anything about Hadrian's Wall.

Rosealee has graduated from getting letters from her ex to mysterious phone calls.  Not to worry, Monroe got on the phone and played tough husband to ward off trouble.  This is yet another storyline that is running in the background which doesn't seem connected to the main meta.  It's a distraction at best.  I have always wanted Rosealee and Monroe to move from being Nick's go to people when he has a Wesen problem but having this totally disconnected from what is going on with Black Claw isn't working for me in the slightest.

Once again we had another Wesen of the week.  It involved homeless men being crucified and then placed in the shape of a constellation to bring rain. I think that Star-Crossed made a great point of exactly how vulnerable the under class are in this society. When they die, or go missing, no one notices.

We learned that not only has Black Claw officially arrived in Portland they are actively recruiting.  It reminds of those old time Christian Revivals and Monroe says that the Wesen are sipping the Kool Aid invoking what happened in Jonestown.  The fact that the humans who were sacrificed were forced to drag their cross to the place of crucifixion very much invoked the Jesus's procession to Calvary.  There was a lot of Christian iconography in this episode.  I haven't fully worked out the message that Grimm was trying to suggest with this but I sense there's more to it than is immediately obvious. Feel free to tell me I'm reading too much into this because we are after all talking about Grimm.

Black Claw may well be a cult but Grimm is still not doing a good job at explaining exactly why it is all the Wesen who are rebelling are wrong. In this episode alone we learned that the Grimm killed all of the Fuilcré who engaged in ritual sacrifice.  In fact, they didn't just kill the guilty Fuilcré, they killed their family and anyone connected with them as well; that's not justice.  In a situation like this, why shouldn't the Wesen be upset?  The truth of the matter is that they have the numbers and they have been wronged. If Grimm really wants me to be team Hadrian's Wall, they are going to have to work so much harder.  I can understand why an oppressed population would rise up, even if I don't agree with their actions.


The Fuilcré wanted to bring on rain and so killed six people and were in the process of killing the sixth when Nick and Hank showed up.  As soon as the Fuilcré died, it started to rain. Nick immediately denied that the rain had anything to do with the ritual sacrifices. It sort of left us hanging as a matter of fact and so the viewer had to decide for themselves if the sacrifices worked or not.

We have to talk about Eve A.K.A. Juliet.  I think they've convinced me that Juliet's super awesome Hexenbiest powers all come from her wig. Has anyone else noticed that whenever Eve is kicking ass and taking names she's got a wig on? Is this part of how she brings on her alter ego and separates herself from Juliet? At any rate, Juliet is all team Hadrian's Wall and this week we get to see her use her Hexenbiest talents for torture.  The problem with this of course is that she is acting under the leadership of Meisner, so even a strong woman needs a man to tell her what to do. Juliet has gone from being ignorant of the Wesen world around her, to an out of control Hexenbiest and now Eve who might as well be a cyborg.  This is not an improvement on her character at all.

Speaking of women on Grimm, Adalind went hexenbiest geek with Wesen mythology.  Nick was quite surprised by exactly how much Adalind knew. It looks like this is how they are going to make her part of the scoobies. Now that Adalind doesn't have any power and spends her days changing diapers, she can spend her time filling in the blanks for when Nick needs help. Then we had the looks exchanged between Adalind and Nick which unfortunately indicates that are going to continue the love triangle thing with Meisner.  Yes, Adalind and Nick have chemistry on screen with each other but once again because it needs to be repeated, Adalind is Nick's rapist.

This meta needs to get moving.  It feels like we have been sitting in a holding pattern for quite some time now.  Grimm has always been known to drag out their meta and then slam it in at the end of the season, so quickly that people don't even remember the small hints they were given along the way.  I don't know why after five season that the writers cannot seem to get a handle on appropriate pacing but it's at the point of ridiculous now.