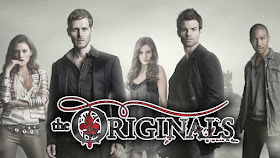 So, who is the smartest vampire around? This is pretty much what this episode comes down to. This week we saw Elijah engage in battle with Aya, over the leadership of the Strix.  It seems that Elijah decided that with Klaus set on getting back the White Oak carving, the best thing to do would be to distract the Strix and to that end, he challenged Aya, thus opening up an old wound. The two fought WWE cage match style only to be so distracted, Marcel snuck into the ring to steal the charter himself.

The moment Marcel stole the charter it was obvious to anyone familiar with this show that he was in cahoots with Marcel.  Let's be clear, from almost the start of the show, Marcel has been the great Negro servant of the Original family and the only one not in the know so to speak is Aya.  This means that she didn't actually get outsmarted by Marcel but Elijah because it is absolutely certain that through Marcel, Elijah will rule the Strix.  Point team white guy I suppose.

Then we had Cami, who as we saw last week stole the carving herself in a bid to force Klaus to return her family's dark objects.  We all knew that this wasn't going to work out well right?  Here's the issue, The Originals doesn't like strong female characters.  Even characters like Rebekah, who theoretically should be as strong as her Original brothers often falls by the wayside.  Cami is a fledgling vampire and given that her life is so entangled with the Original family and that Aurora did in fact kill her, it makes sense that she would want to find a way to be strong and protect herself.  But in a case of all good plans are oft to go astray, Cami ends up not getting back her dark objects and leaving Klaus and Elijah vulnerable.

Then we have Davina, whose only goal seems to be bring Kol (the most evil and murderous of the Original family) back from the dead cause true love and all.  Keep in mind that Davina has actually known Kol for a New York minute and that until last week, she didn't even really know what he looked like.  So, Davina is tasked by Aya to find out what Ariane found out about the weapon. In the process of consecrating Ariane’s body, (cause the ancestors aren't pissed enough with you Davina) she learns what the weapon is.  Does she tell Marcel? Nope. She does more investigating to find out where the weapon is and then gets overpowered by the head Strix witch. Davina does manage to regain consciousness but not in time to warm Cami that the witches are coming for her.

Once again, Freya is missing.  Elijah claims that he asked Freya to help him find Marcel, which is probably not true given that Elijah orchestrated this fake power struggle.  Freya is supposedly a powerful witch and should therefore be involved in everything her powerful brothers are doing since this is a threat to the family but the writers have a tendency to just tuck her away. She's a tool. I don't understand for one moment why Freya didn't make an appearance in this episode. Her absence served to underscore how powerless and unnecessary women are on The Originals.

Speaking of women, Aurora is back with a vengeance. The Originals is clearly playing with the idea that hell hath no fury like a woman scorned.  Here's the issue: though Aurora has the White Oak carving, she is destined to loose because otherwise the show will come to an end.  This means that once again we are destined to see the failure of a woman and the triumph of a male character. Look, I'm not especially endeared to Aurora, particularly given how the writers have chosen to treat her mental illness but when it comes to gender, it's just underscoring that men, no matter what the circumstances are cannot possibly lose.  Can we just have Hope grow up already and kick her father's ass?


Both Elijah and Klaus talk about how different it is to feel vulnerable, given that this is how people usually feel when confronting them.  With Michael dead and Dahlia defeated, they have a lot of reason to feel confident.  Writers could use this moment of vulnerability to add some humility and humanity to these characters which would be real good growth for both brothers but I doubt that this will happen.  The two will rage and scheme their way to victory.  This is part of what makes this storyline so anticlimactic to me.  We know that the Mikaelsons have to win for the sake of the continuity of the show but the writers really don't seem to think that character growth is at all important. They have set up a way of doing things where women and POC are firmly shown their place while the hyperable and hypermasculine brothers strut around the Quarter as rulers.

On a final note, I think it's worth pointing out that The Original's favourite GBF Josh was absent this week, having been sent right back to the plot box.  He only showed up last week to be Davina's servant. To say the treatment of this character has been underwhelming is to be kind.  Josh could have potential, he could become a second to Marcel, he could have a life of his own.  He could be a character of note but the writers won't let that happen and instead they collect inclusion cookies.  We all know damn well that when Josh makes an appearance again, it will be because Davina needs something.

I don't truly expect great things from the CW but the thing that maddens me about The Originals, is that it really does have potential for some very interesting growth, if the writers would stop wedding themselves to the idea that White men and their pain and or strength are the center of the bloody universe.  Would it really have been a bad thing to have Cami put one over on Klaus and get her black objects back?  Would it really have been a bad thing for Aya to even temporarily defeat Elijah at his own game?  Would it really have been a bad thing for Marcel to decide just once that he was done being the house negro for the Mikaelsons without it ending up in disaster?  Sometimes, the side characters need to win, particularly when your show is set up to promote straight, white, able bodied cisgender men.  It's not enough throw in a few female characters and a few people of colour and call it a day anymore.  Sure, The Originals is more racially diverse than say Friends, but that's not saying much.