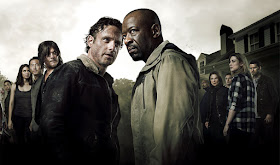 The triumph of taking out the Saviour compound is short lived.  Rick gets a message that the Saviours have captured both Carol and Maggie.  Rick tries to encourage them into a trade since they are holding onto one of the saviours but the Saviours decide to stall for time, after calling in some reinforcements.

In many ways, The Same Boat is Carol's episode.  From the very beginning I knew that the protective Carol would do whatever she had to do to protect Maggie.  I watched as she pretended to hyperventilate, in order to keep a rosary and convince her captives that she was weak.  Carol's behaviour was the ultimate act of playing possum.  From hyperventilation, to talking about being a battered woman, to the crocodile tears that tolled down her face, everything Carol did was to ensure that she and Maggie went free.

Polly pretty much made the decisions for the Saviours and many ways she was just like Carol.  Polly and Carol had very similar backgrounds and because of this, not only did she buy Carol's act of possum, she reacted with very little sympathy for her. Carol's supposed weakness served to make Polly angry causing her to repeatedly ask Carol what she was so afraid of.  It's not until the end when we learn that Carol was afraid of killing Polly.

Maggie was subjected to questioning about why she would choose to get pregnant now. I believe that it was heavily implied that Maggie is privileged. Her captors are quick to notice that she is relatively clean, she looks well fed and that her clothing is all in pretty good shape.  Maggie is a far cry from her days on the road and because she is an integral part of Alexandria, where there's no abuse and no one has to steal food, her life is quite different from the Saviour women.

There's a lot of moral grey on The Walking Dead. We've been following Rick's group through the apocalypse for six years and they are very different people from who we first met. Rick has certainly made some questionable decisions but we - the viewing audience - have adjusted to their reality time and time again, accepting their justifications for the various actions they have taken.  When Maggie is told that she isn't part of the good guys, it's clear that she doesn't believe it but it's true. Yes, the Saviours attacked Darryl, Abraham, and Sasha on the way back to Alexandria, but they were blown to bits for their trouble.  The saviours didn't attack Alexandria and Maggie agreed to go and kill a bunch of people she has never met based on the fact that she wanted food for her community.  Yes, food is an essential need but does it justify outright murder?  Is Maggie part of the good guys?


For the first time in a long time, Carol actually hesitates to kill someone.  Instead of killing Polly outright, Carol tells Polly to run because she hopes that she doesn't have to kill her.  It's almost as though Carol is now feeling the weight of everything that she has done.  Has spending time with Morgan actually rubbed off on Carol? Carol even admits that she could have killed one of the Saviours just before they were captured but missed on purpose. Unlike Carol, Maggie is full steam ahead and is determined that everyone die.

Carol does become matter of fact when it's time to deal with the reinforcements.  She seems to have no problem setting them on fire alive. This time, there's no hesitation in her action and there's no warning to her victims to run and save their own lives.  It's only when the cavalry shows up and Carol is embraced by Darryl that she admits that she's not okay.  I couldn't help but wonder if the reason Carol isn't okay is because though she was play acting, in many ways, some of her old self shone through for the first time in a long time.  It's easy to always see the tougher side of Carol because that's what she presents to the world but she's still a survivor of domestic violence and still a grieving mother.

For Maggie's part, when she was embraced by Glenn she simply said that she couldn't do this anymore.  Having to interact with the Saviour women, Maggie got to see first hand the difficulties of being a woman in the apocalypse in terms of reproduction.  When Maggie and Glenn first shared the ultrasound of their little peanut, clearly their child represented hope to everyone.  Now Maggie must confront the fact that hope, in some ways is dangerous because because  with all of the challenges of being in an apocalypse, hope is more fragile than it ever has been.