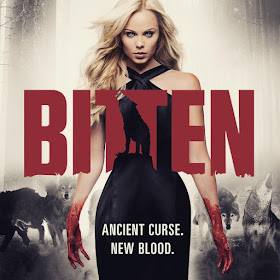 Like Jeremy – he’s off to kill Roman all on his lonesome and he decides, along the way, to make Elena the new alpha whether he comes back or not because she’s totally ready and grown and learned and will make a whole new different kind of pack

Which, y’know would have been interesting if there had been one single tiny crumb of development for it. Just one tiny attempt to throw some development at this, to show this new pack, to show Elena’s new ideas, to show Jeremy changing. To show one iota of what has been happening in the books rather than just importing it wholesale into the tv series without several books worth of development of Elena, Jeremy and the pack that go with it. And what Pack? Elena, Nick and Clay? That’s not a pack. It’s not even enough for a poker game!

While Elena and Clay need to kill the assassin (who I am still not calling “The Albino” because that’s a terribly offensive trope) only there appears to be two of them now, working in tandem. Rather than actually trying to kill the Albino they talk to him and he shows off the picture he has of Nick and Katia who were captured last episode. Which means they keep him alive through a very very very long and very very very pointless series of events where the assassin repeatedly tries to convince Clay that he’s a super evil killer

Why, why is he so invested in this? Why does this matter? Why am I watching this? Why do I care?

Thankfully, Nick and Katia free themselves because they’d die of old age long before Elena and Clay stop playing games with the assassin. But no before one of the assassin clones ambushes Katia and stabs her. She’s dead and everyone is sad.

Elena, Nick and Clay are reunited to look at their brilliant master plan of “sit still and do nothing and hope Jeremy kills Roman and it all goes away”. A master plan, truly. This whole season is beginning to feel dreadfully dragged out. We’ve had two episodes of playing silly games with the assassin and generally being incredibly inept.

Speaking of, it looks like Jeremy is doing the same with Roman. I'm just so very bored with this series which is kind of sad because it could have been so much better