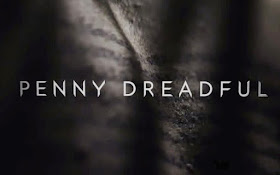 I forgot, while this show was away, I forgot how beautiful the language was. I forgot the poetry for it, I forgot the elaborate rhythm of it. I forgot how sad and morbid and gorgeous and musical it was and how many excellent, amazing speeches there were. Honestly the conversations on this show could be a soundtrack. I know many people probably don’t share my love for overwrought, probably quite convoluted speeches (and I’m sure if they were written down they would frustrate me no end) but I love it

And I forgot how beautiful it was, the visuals, all the gothic dark and shadow, the imagery of long shuttered rooms and the excellent acting of the ragged people, the almost ruins these characters have become over the last two gruelling seasons. The acting, the imagery – I love it so much.

So, time to catch up with various characters

Starting with Vanessa who has fallen into a dark, bleak depression after the last season, shutting herself in and isolating herself from the world until Professor Lyle arrives and delivers some deeply emotional heart rending lines about his own battle with depression, self hate and how he felt “loathed and loathesome” until he got help and is now, “resplendently, who I am”. I give a thousand points of Lyle’s fierce declaration of self in such a grossly homophobic setting – and take away a substantial amount of them for Lyle’s beautiful declaration of self being for the edification and growth of a straight lady. It’s still beautiful though. And with it he sets up an appointment for Vanessa with a psychiatrist – or, at this time, an Alienist. Dr. Seward

And she is awesome. She perfectly, combatively, excellently (and with beautiful language) pinpoints all of Vanessa’s issues and pain (yes, it’s a magical diagnosis and I really wish that they could magically diagnose so quickly and easily but it’s still awesome). She also firmly declares she’s not broken or wrong – she’s ill. It’s excellent and great fun and seeing Vanessa’s desperate, tiny look of tremulous hope. Oh precious hope on Vanessa’s face! Also even in that, Vanessa is still capable enough to give some of her own even with her at her most vulnerable point. And her doctor is related to the Cut Wife, so maybe magical diagnosis isn’t wrong.

At the instruction of her doctor she does something new – and goes to the Natural History museum to look at the animals and run into Dr. Sweet to have another utterly beautifully elaborate, gothic, morbid, conversation about death and scorpions and the poor lonely exhibits in their dusty cases that are so ignored and what a fun hobby taxidermy is (oh, yes, it’s beautiful and elaborate and manages to not make them look like serial killers because it’s so gloriously gothic). Did I mention how much I loved the imagery and language? Also all those dusty exhibits and scorpions are, of course, perfect metaphors for Vanessa

Who goes home and opens the shutters and starts cleaning. Yes, a lot of me is still yelling about how this is a ridiculously fast cure considering she’s literally had one visit to a doctor and one little tour round a museum. It is too fast. It is too easy. At the same time Vanessa has spent so long tormented, and will likely spend so much more time tormented, I can’t say I’m that vexed by this speedy path to discovery just because Vanessa not tormented is so rare

She also makes another beautiful and excellent monologue – because she has lost her faith and for a long time that destroyed her. But now she says she’s lost her faith in god, but she still has herself and she still has hope. And here’s me just loving the whole thing, especially since it wonderfully circles back to Lyle’s own declaration of self.

But torment is coming in the form of… Dracula! Oh you knew he was coming! Dracula has found his Renfield (alas over the unnecessary corpse of a dead sex worker. Seriously Renfield could have been kidnapped anywhere, doing anything, why use the dehumanised prop of a dead sex worker – especially after all the work fighting that with Brona – as his introduction?) and wants him to spy on Vanessa. He also have uber creepy minions who move in perfectly choreographed insectile ways which is really really REALLY creepy. But for now Vanessa is happy and awesome and not chewing the furnishings

Meanwhile Ethan is being extradited to the US, New Mexico, on a train with lots of guards (elaborate gothic speech about America and the lack of tea because elaborate beautiful epic speeches are everything on this show) – who manage to survive when a troop of goons get on the train and shoot everyone to “rescue” Ethan. They work for his dad. He’s not a fan of being rescued.

Oh and they spare the poor defenceless lady who says how very very fragile and helpless she is. Yeaaahh… that lady, there? She is death. She is the bringer of doom. She is the harbinger of the apocalypse and an all round badarse and one to watch.

Time to go to Malcolm and this is a whole hot mess. He is in Zanzibar burying Sembene and lamenting at what a hot mess colonialism has made of the continent. Well, what Belgian, French and German colonialism has done to the continent. Yes, the British guy, the British explorer, has decided OTHER foreign powers have ruined his precious Africa with their brutal colonialism. There is such a terrible lack of self-reflection in this that someone really needs to hit him over the head with something hard

He’s also in need of a new POC sidekick. Introducing Kaetenay, the Chiricahua Apache who is here with lots of implied woo-woo (fight the great demons of earth and sky? C’mon this show with all of its elaborate gothic speech is better than this) to recruit Malcolm to help save Ethan, since they’re both father figure to him

Personally I think Malcolm is way more of a father figure to Victor Frankenstein than Ethan. But even then Malcolm as a father figure? I can buy because we’ve seen that develop and we’ve seen his own storylines and him be a character in his own right. So father figure? I can buy it. Kaetenay? We’re just told. He just steps in with none of his own story or establishment and introduces himself as a father figure and that’s a problem for a POC character. It’s important to establish himself as his own character, his own person before we establish him as a mentor/tool/servant/father to a main white character. This is all the more troublesome after the utter racist hot mess of Sembene’s portrayal last season.

Anyway I mentioned Victor Frankenstein so time to catch up on him – and he is a hot mess of a state, even worse than Vanessa. He’s now all torn up, opiate addicted and generally not doing well when his friend arrives – Dr. Henry Jeckyll. An Indian man and he’s introduced with a stark display of the bigotry he faces; a bigotry that has given him a lot of rage which Victor is counting on – wanting Henry to help him kill Lily, Caliban et al. This could go very toxic – Jeckyll and Hyde as a PoC is one thing – but are we talking about someone consumed by animalistic, uncontrollable rage? Because that could be a damaging trope and it seems to be what is being implied.

Henry actually came to be a friend to Victor, to help him out (and deal some tough, hard truth: about his own narcissism and self-involvement and how he hurt the isolated Henry by making him more isolated) – but upon hearing Victor’s tale he offers to “tame” Lily. To “domesticate” her. Oh she is going to eat him alive, especially after all of her very epic speeches about how women are treated. She better not be “tamed”, she better leave them both very very very sorry, Penny Dreadful.