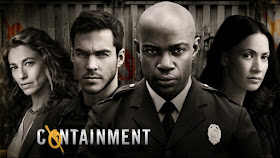 And so we come to the last episode of Containment where they try really hard to make this plot make sense. Actually, that’s a lie. They don’t try that hard. Not hard at all really – I mean, I can see why they wouldn’t, why start putting effort in on the last episode when you’ve not bothered all season?

So Alex is still being all persecuted by the evil Sabine Lomas who has decided to set Internal Affairs on him now. They don’t do anything, which is probably fortunate for her because why, in the name of all that is sensible, would Lomas WANT more investigative scrutiny?

Anyway, it does nothing except waste my time – and Alex sets his dad (who is an awesome police detective whose story about not being recognised because of racism would have been far far more interesting than… well, this show) to find Leo the journalist. He does this using unspecified awesome detective skills because who needs details?

So what is Alex doing? He is investigating some people who are being snuck out of the cordon – evil Office Meece is sneaking people out with the help of earnest-but-clueless-cop who Meece shoots (because evil). Alex shuts them down, pointing out a 48 hour quarantine isn’t sufficient because the virus mutates and any of them could be carriers – and cops can’t make this decision because they don’t have an MD

Excuse me? Did Alex – no, did ANYONE on this show – dare to shout someone down for not respecting a doctor’s professional opinion?

This whole show is BASED on unqualified fools deciding doctors are lying to them because who the fuck cares about science?! This is the show!! How dare the writers pull this?!

Ok, let’s keep going, nearly there. Sabine is also blowing up these escape tunnels which puts a time limit on the whole escape. Alex goes down and finds… Jenna leading the escape. It’s a desperate, painful scene – actually it’s a great scene (honestly if I have to say anything positive about this 13 week sentence pretending to be a show, it is that the acting is excellent. Really excellent – these actors deserved better. I kind of hope the actors all band together against the writers. Hopefully to eat them).

Faced with this conflict he does the only thing he can – go back behind the cordon with Jenna. He can’t let them out without risking the city, but he can’t leave them either. It’s the only good choice and I truly love beyond measure that this show ends with them together.

Teresa and Xander also end up together, engaged and back in her mother’s shop. I don’t care all that much about them to be honest, but it’s nice.

Meanwhile inside the Cordon, the cure for Cinco doesn’t work which hella pisses off Trey and Jake has to intervene to stop Dr. Cannerts being killed.

The emotion is good, (again good acting), and Jake caring about Thomas, a Black child, is valuable. But dismissing Cinco as a “thug” is completely unnecessary racial code word. Wouldn’t “gang member” or “criminal” or even “adult” be equally pointed without the dog whistle.

But Dr. Cannerts notices something – hah, no, bullshit! Doctors know nothing in this show! Jake spots it! So now they just need another donor so they don’t drain Thomas dry – which again goes to Jake making a beautiful emotional plea to the people of the cordon and manage to find someone – the preacher who was praying with the infected – who is also immune. They now have the keys to the cure. Yay good news!

More good news – Leo and Alex’s dad manage to bring Lomas down. See this very very crafty woman has put together her master plan to destroy the country so she can yell “I Told You So!” in the afterlife felt the ridiculous need to confess all to Alex. Repeatedly.

Really? Really? How did she NOT predict this? Really? This is such horrendous writing. It beggars belief. We live in an age where you can record a conversation by sitting on our mobile phones and Lomas didn’t expect this? Get out with your pathetic storytelling

Let’s go back to the awesome acting and the most terrible thing that happened in this series… the death of Bert and Madeline. The tragedy of this is completely and utterly heart rending.

So with the last episode of this show that was never meant to be renewed (because there is some justice in the world) I think I’ve made it clear that, despite the awesome acting, the actual writing of this show was left to a room full of particularly lazy lemurs. The plot line was not just lazy, but had numerous little, ridiculous side plots that never went anywhere or added anything

In terms of racial diversity we did have a lot of POC characters in lead position. If any character can be said to be the protagonist, it’s Alex, a Black cop who made points about racism (with his father) in several brief moments and whose struggle against the powers that be is the centre of the show. Though the way it ended with Jake’s voice over does imply that the show at least saw Jake as the central character

While Trey and Cinco were pretty stereotyped gang members, Trey also showed considerable emotion, sympathy and compassion above and beyond the usual stereotype. We had Xander, the teen father who genuinely, passionately cared about Teresa (so, yes, it’s teen pregnancy but it’s teen pregnancy with teenagers who do genuinely care about each other and are dedicated together). And we have Bert and Madeline, not just an interracial couple, but an older interracial couple whose love has been the most beautiful and utterly tragic part of this show. The leader of the people in the cordon, with the greatest insight, dedicated loyalty to her friends was Jenna. Brave, dedicated, loyal, wise, clever and with issues she faced, resolved (along with her sad past) and ended up with the guy. And the doctor who actually found the cure was Dr. Victor Cannerts an East Asian man – I just wish he managed to do it without being heckled and having to constantly mea culpa to Katie.

There’s a lot of racial diversity there – just a shame they’re in a terrible plot line.

With that we have some strong women – Jenna obviously and her relationship with Suzy was wonderful, complex, loyal and generally awesome. I think Kate was supposed to be strong, dedicated, intelligent, insightful and tragic as well but a) I hated her and b) I kind of think she was fridged – albeit very belatedly – for Jake. But I think it was late in the season for me to consider it a fridging and all about Jake’s story. Sabine… was too badly written to be remotely praised. I don’t think there are undue issues with Teresa but her conflicts with her mother was just a bit cliché and dull.

The LGBT representation, as I’ve mentioned, is horrendously trope laden. Sam was so lacking in personality that I didn’t even know his name for several episodes. This is a show that made a point of developing back stories and personalities and they barely spent any effort at all on Sam. He was there as a sounding board, to serve – to sacrifice – for the straight cast. A classic, servile, non-character GBF (who doesn’t even have friendship to justify his obedience). It’s tiresome, it’s been done over and over again. These servile, characterless, sacrificing tokens are not representation.