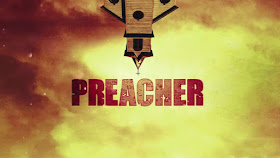 This episode brings some interestingly deep introspection into Odin Quincannon’s motives. We see his whole family destroyed in a tragic (yet, because this is Preacher, slightly bizarre and zany) disaster and his incredibly disturbing but poignant appeal to Jessie’s dad to DENOUNCE god as a lie. Surrounded by chunks of cows and his dead relatives insisting “it’s all meat”.

Yes it was gross and over the top and, well, Preacher, but it’s also meaningful and deep and poignant. We can see his pain and rage

And in the present day he decides to deal with this by leading his little army against Jessie’s church – wanting to turn it into a food court. Even Miles is also on side – because he’s looked at the pretty much impoverished and doomed town and desperately clings to Odin’s investment as the thing to save his town. He’s definitely making a deal with the devil – but does this make him a terrible mayor or a good one?

(We also see more of his and Emily’s toxic relationship with Emily – with her both being irritated by his creepy obsequiousness – while also kind of relying on it).

Except Jessie, even without the power of Genesis, is still super bad-ass. He beats people. He shoots lots of warning shots (he shoots a sword out of someone’s hand and stabs someone else. No, really. That is like the ultimate Preacher moment) and generally terrifying everyone even without the word of god

It all devolves to beyond ridiculousness when the whole town turns this into a party, a cook out and general amusement. Oh and Jessie shoots a man’s dick of. Of course he does. For some reason Donnie seems to also be dressed in a Confederate uniform… I… don’t even know why?

Meanwhile Jessie is kind of ignoring the whole army invading and is far more focused on his hallucination of Eugene and his deep regrets about sending him to hell and using the Genesis Voice. He calls in the angels, removing the prohibition stopping them coming near him. He’s ready to give it back – well he almost backs out but then the angels have a really painful put down for him:

All this power… and what good has he done with it?

They do get the Genesis out of him – except then Jessie makes a speech about how no-one actually knows god’s will – and Genesis decides to break out of its coffee pot and return to Jessie. It wants to stay.

The angels pretty much conclude everything is fucked and leave. They’re not wrong. They also don’t help Jessie return Eugene from Hell as he wanted – admitting that basically they don’t have a clue about all that, despite being angels. It’s this admitted ignorance (and the fact that he alone HASN’T been splattered by Genesis) that makes Jessie convinced, yet again, that god has a plan for him.

Still it doesn’t all go Jessie’s way – because Donnie in his confederate uniform deliberately deafens himself so he can point a gun at Jessie without fear of Genesis. And, yes, Genesis doesn’t work on people who can’t hear. Of course Jessie could probably kill him anyway. With one hand. Or less. But he gives up, he’s absorbed a whole lot of angst over Eugene and his general failure to do anything in god’s name even with super powers and virtually hands himself over to Odin

There he asks the question we all want to know – how did Odin resist his Genesis command? He didn’t – he is serving god. His god (which just goes to show one needs to be specific with commands, and also not assume everyone is a Christian or even a Theist) – the god of meat. The god of what is real. Of what he can touch. He adamantly refuses to follow a “silent god.” Nor does he respect a church he calls “wood, glass and lies”.

Look I appreciate that there is some definite nuance in the depiction of Odin and why he has lost his faith – but it remains that he is a villain and pretty perverse and awful. He listens to the deaths of cows for his own amusement. No matter what his reasons are, the fact remains this is a pretty demonising depiction of someone who is not Christian and an Atheist. It also depicts him not as not believing in god – but being ANGRY with god, needing denouncement; not about not believing god exists. Not believing in god isn’t necessarily caused by trauma, it certainly doesn’t leave them as cow-slaughtering villains.

This seems to get through to Jessie who has a new plan – bring god to the church. Bring him there, ask his questions and if god

Can Genesis do this? I think this is going to seriously backfire. Oh so bad

Meanwhile Jessie is definitely still alive because Tulip is clearly feeding dogs to him. But only after falling in love with them first in a truly heart churning way. Awwww, Tulip…. Poor Tulip