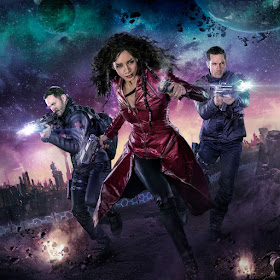 First and most tragically we have the inevitable confrontation – Dutch finding Johnny imprisoned by Jelcho, learning he’s been lying to her and learning that he has risked their license as killjoys

She’s devastated and it’s emotional and painful and very very sad and a large part of me just wants to cry “no no no no – whyyyyy!?”

But it’s not entirely all about Johnny’s betrayal. He points out he loves Pawter – and that both Dutch and Pawter have their things (sixes, Khlyen) (Westerley, old town). What isn’t said but I think we can clearly imply is that neither of them are Johnny’s thing – Dutch does say “you’re my thing” but is he, though, really? Even D’avin is more connected than him. And, really is Dutch risking their license any more than Johnny? Not to say Johnny’s in the clear with the deception et al – but there’s something there

What I can’t help but thinking about this is how many marginalised sidekicks we’ve seen in the genre I would have loved to have this beginnings of a storyline. I would have loved to see them do their own thing while the lead is surprised and feels betrayed that the sidekick has their own life and isn’t content to just follow in their wake. It’s even slightly frustrating that when we finally see this challenge of assumed service it’s a (one of the few) privileged sidekick and a marginalised lead.

Dutch leaves Johnny for Pawter to rescue – which Pawter does by invoking her mighty authority and making Jelcho bow and scrape because she is one of the nine now and is awesome.

But there’s another authority – Delle Sayah who is behind all evil, is the one pulling Jelcho’s strings and orders him to speed up the plan even if it is way ahead of schedule. So what is this ominous plan

Pawter thinks she’s hit on it from last episode – “eugenics execution” the wall will kill all the old and weak and everyone who the company thinks is not a useful worker. She and Johnny run around Old Town testing blood and air and water trying to find exactly how the company intends to do this – eventually hitting on a shipment of special rations which is due to arrive soon.

They’re all ready to gather the evidence and pass it to Arun, Pawter’s fellow councilman and member of the nine (and, alas, disposable Black man) when awter and Johnny start acting strangely

They missed something that the wall does – it also gets everyone High when Jelcho turns it to 11. Happily tripping away and very suggestible, Pawter and Johnny blissfully lose focus and completely forget what they’re doing. When Arun arrives, he’s not amused – but it doesn’t last long as Jelcho shoots Arun and easily frames the very suggestible Pawter for the murder. Oh someone really does need to kill him soon

Pawter and Johnny continue to play while the entire town is completely high, even jumping off roofs and completely ignoring severe injuries. So I’m not sure how useful the wall will be to create “productive drones”. Easily distracted Flower Children do not a productive work force make.

Far less sunny and gleeful is Dutch and D’avin who have put Johnny in a time out while they do their thing. They’re trying to track down Aneela, the spooky Six woman who looks just like Dutch and is hundreds of years old who Khlyen now wants her to kill via red box instructions (I kind of love a storyline which makes so much sense when watching it but then looks so damn ridiculous when you write it down). D’avin has also found a new trick – his ability to control the plasma means he can make the heads of Sixes explode. His attempts to control this and Alvis being a surprisingly terrible mentor are kind of hilarious

They check in one the source of all Khlyen’s plotting – Olan the teenager with all the excess info zapped into his brain (see? It’s impossible to type this zany plot line). While he is completely losing it because of that download, he does manage to give them a map of the “rivers” of Arkyn. And also being very very scared of Aneela.

So it’s off to Arken with Alvis in tour to head to the secret underground labs deep in the planet (via elevator provided by one of Khlyen’s mirror safe houses).

Underground is an ancient lab full of bodies that appear to have been tested on to take the plasma to become sixes (the bodies are still preserved because of the power of the plasma goo). And they find, behind a wall just like the one In Oldtown – behind which is an ancient Scarback monk full of Six plasma. They rescue him – but he’s also on the whole Aneela=devil mindset and they need to use D’avin’s goo powers to calm him down (he’s a Six, therefore hard to subdue).

They guy is one of the super ancient monks that Alvis has talked about from his history who were sent to destroy the devil. That would be Aneela, again. Dutch is definitely having issues with this. And they just get ramped up 10 fold when she learns that Aneela is Khlyen’s daughter. The same Khlyen who now wants Dutch to kill Aneela.

The monk asks for death and, with D’avin’s poignant line about him getting to decide when he his pain is too much, they kill him. Otherwise the writers would have an ancient level 6 monk to fit in somewhere.

Even more poignant, Dutch asks him to forgive her. He says no. Ouch

They study the wall here (a wall that predates Old Town – so the invention looks like more of a rediscovery) and realise that it has the drugging side effect… they try to call Johnny and get no response.

We’re getting a lot of information as this season comes closer to the end – but we’re also getting a lot of mystery. So far I think the major mysteries (beyond what Dutch is) is this unknown alien threat which may or may not be behind the green goo, exactly what the council of Nine actually intends to do – and not just with Old town but in general – and these ancient mysteries with the Monks and Sixes. Interestingly they are all connected, that’s definitely true, but I just can’t say how. What I can say is I really love the four core cast members which really turns this show into a gem.