The Frankenstein Chronicles, Season 1, Episode 3: All the Lost Children 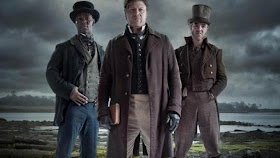 I’m, sadly, beginning to get a sense of the pacing of this series. Which is basically glacially slow. I know it’s full of emotion and pain and… it’s just that that seems to be the go to marker for any drama trying to present itself as “serious”. So I’ve seen a lot of it (and, really, In the Flesh not only set the bar for dramatic tragedy but shattered the bar and used the remains of the bar to beat our emotions to a bloody pulp)

So lots and lots of scenes of Marlotte woeing about his syphilis and dead family are very well done, definitely worthy of respect and praise form their impact. But at the same time they’re all just kind of predictable and I kind of want to just skim past back to the plot rather than circling (circling because it doesn’t really go anywhere) round in the same mopey, well acted, sad, but tired orbit.

Anyway, this book Marlotte decides to get Mary Shelley involved for… reasons. Some reasons. I honestly have no idea why Marlotte has seen a child murder and decided that popular literature is really the way to solve this.

Conveniently Mary Shelley is the woman who handed over William Blake’s last work to Marlotte and is even now all kinds of torn and consumed about her work and the pain it caused (not least of which appears to be rejection by what remains of her own family). She paints herself, in some ways, as a rebel – a rebel because she would do anything, including break the laws of god, if it will bring her family back.

And we still have Nightengale – continually dismissed and ignored by Marlotte in a way that I dearly hope will be called out at some point. And Marlotte keeps sending him to secretly follow people which is beginning to look like a bad joke because the casting director still badly needs to throw in some Black extras so Nightengale doesn’t look like The Only Black Man in London

Flora, the girl that Marlotte kind of took in as an investigative tool last episode is revealed to be pregnant after being raped by a man who didn’t want to pay the fee that Billy was trying to prostitute her for. Flora is clear, she wants an abortion, she doesn’t want to continue her pregnancy, she knows she and the baby have little chance and the babe is likely to die even if it is born.

Of course the men won’t hear of it – I would put this down to being a product of there. But let’s face it the storyline could exist today and it wouldn’t be appreciably different or out of place. Instead, having heard Flora’s choice, Marlotte decides to dump her in Lord Harvey’s hospital, giving him an excuse to spy on the man in case he’s…. killing poor children to discredit an act of Parliament in the name of poor children going to heaven

Nightengale, thankfully, in a partial attempt to treat Flora like an actual human, protests that Marlotte is actually using her as a sacrificial tool to let him spy on Lord Harvey

Which he kind of is doing

Lord Harvey reminds us that his hospital will be shut down if Sir Pool manages to pass his law. And we get an uncomfortable conflict here I’m not a big fan of. See, Lord Harvey isn’t a big fan of surgery, in fact he’s completely against that. I can understand that as it’s a reasonable prejudice of the time –but at the same time he’s also apparently discovered penicillin. Look, him being more compassionate I can buy. But setting up the religious, anti-progressive doctor as being BETTER at medicine than the exploratory surgeons attending actual medical school is an annoyingly dangerous anti-science meme.

He offers his penicillin to Marlotte since Pencillin does, actually, cure syphilis. Only this is several decades before we started doing this. He also has some poor guy suffering late stage Syphilis used as a tool to add extra horror and angst to Marlotte.

Him and me both

Perhaps finally realising that he should be actually investigating some child murders, Marlotte decides belatedly to track down some of the Resurrectionists who are murdering people – which means crawling down a smelly tunnel. Possibly because his reading list told him to.