From Dusk Till Dawn, Season 3, Episode 3: Protect and Serve 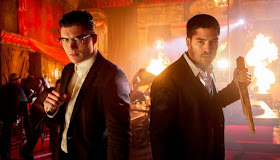 Time for a new demon of the week – this time a scorpion demon hunting down young culebras.

One of them manages to escape to turn up on Freddie’s doorstep – begging the peacekeeper for help before killing himself with one of Freddie’s stakes.

Freddie follows up a neck tattoo on the dead Culebra – who doesn’t turn to ash when he dies which is different – and finds a fraternity full of culebras led by Aiden Turner. Professor Aiden Turner

Oh, yay, he’s back. Can we get rid of him and keep Santanico around

Freddie continues have some reservations about his role as peacekeeper – especially since the culebras are still biting, turning and killing people.

Aiden is, as should be no surprise, a super creepy, handsy molester of his female students. I loathe this character and really really wish he was eaten. Alas, it doesn’t happen. He has built a “family” of frat culebras and seems to be genuinely caring of them as he objects furiously to Freddie dismissing them. He’s still a nasty predatory molester but he cares about this “family”. Though Freddie still points out he’s turning teens and they’re eating people so family isn’t that fluffy

Aiden does drop a lot of world building on us, back in Xibalba, hell, their was a hierarchy of demons and Culebras were waaaaay at the bottom, effectively slaves and cattle to the higher demons

One of the ways of controlling Culebras is to mutilate them and remove their venom glands – as the victim at Freddie’s was. Without the venom a Culebra cannot turn, heal super fast and doesn’t even turn to dust when they die. The venom is their mojo. And one of Aiden’s other “family”, Chloe has also been captured and in need of rescue

Said demon with the scorpion tale is happily milking the venom from his captured Culebros (why? What can they use the venom for). He’s also noticed the tattoos and uses them to track down and capture the rest of Aiden’s “family” – and Aiden himself.

Cut to Seth and Richie talking to Ximena about the possessed Kate and some legends Richie’s heard about a super duper demon hunter out there. Ximena reacts to all of this by denying everything – oh and Venganza has gone missing.

This doesn’t put Seth and Richie off so they go find the hunter themselves – it’s not that hard, the guy is running a little drug shop and by the quality of his super super vintage cannabis, Richie identifies him as the hunter. The hunter isn’t impressed, he’s retired and doesn’t want to get involved in a war against a species that’s trying to wipe him out/enslave him

Oooookay? You’d think he’d have a vested interest in this?

Anyway, after putting Seth and Richie in their place as rank amateurs he is willing to come with them because Ximena is his ex and she said he was dead. They have Relationship Issues

With the hunter about they now have a whole lot more world building. Firstly Venganza has gone into hiding and even Ximena doesn’t know where she is. Secondly, Amara, the demon possessing Kate is a) evil b) the big devil queen, c) can’t be exorcised (Kate will die. Honest. Uh-huh) and d) she wants to open the doors to Xilbaba and unleash all hell

And they confirm that Culebras were slaves – and the whole reason Amarra came to Earth is because the Culebra lords had the hubris to call themselves lord. She came through and the lords ate her – and kept the blood to be stored for the future. That ended up in the blood well which was the source of so much drama and when that was spilled that ended up in Kate’s body.

All fully filled in they can get to ride to the rescue of Aiden and Freddie (who are trying to take down the scorpion demon but not entirely succeeding) and give him a good killing. Which they do – but the captured Culebras are gone

We next see Kate and them apparently opening the doors to Xilbalba, this will not be good

I’m curious about Freddie and his whole change of role and side. He is now the peacekeeper but… why? Why is he invested in helping the culebras against the demons? I’d really like to see more – though I really do like to see the conflict Freddie obviously have but I still feel we need to know more. In fact, opening the doors to Xilbalba, if they’d talked about it earlier, would give him an excellent motive