The Librarians, Season 3, Episode 3: The Reunion of Evil 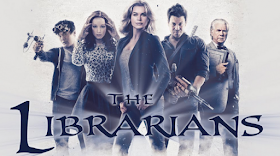 This episode gets a big doubtful hmmmm from me. It gets a hmmmm because it’s primarily addressing two issues and one of those issues it annoyingly fails to address while addressing it.

Cassandra and Jake are off on a zaney adventure trying to get a magical artefact. Side note here, we have a brief snark from Jake about Flynn running off again which gets another hmmmm from me – because this is a point. Jake et al has a right to be annoyed – especially since their team work is so well emphasised – by Flynn unilaterally deciding he’s going to up and run off to parts unknown. I think this is definitely something to develop – the whole emphasis on the librarians being a team would find Flynn’s impetuous lone-rangerness annoying

Anyway, the magical artefact is the Crystal of Angraboda (in norse mythology, the mother of monsters who had several children by Loki – including Fenrir and Jormungandr) and along with the crystal we have a lot of frost giants and a huge, terrible storm

There follows a full episode of Cassandra and Jake pretending to be frost giants who love plagues and chaos and drinking and bar games which is fun and all. But kind of misses what the actual debate of this magic-of-the-week is supposed to be

Whether you can use magic safely – something Cassandra has repeatedly advocated. Magic can be good. Magic can be powerful. Magic can be useful. While Jake argues over and over that magic is too dangerous and too unpredictable. They make many good arguments

Cassandra points out that many things are dangerous – science and technology is very dangerous before you understand it. Jake has the very reasonable counter that Cassandra doesn’t understand it and she’s brilliant and intelligent – far too much so to be this reckless. I think this is a key because his distrust of magic is clearly a distrust of MAGIC – not HER using magic. There’s even a point where he encourages her to use magic since it seems to be the only way out of a tricky situation

She also points out that the Library does use magic. The gates that Jenkin’s uses, the many artefacts they use, the fact they can say “we’re the Librarians” and get in places are all very obvious signs of magic. They do use magic.

What is also clear is that, while she may be not fire throwing sorceress, Cassandra is developing a repertoire of spells. At the end, it’s clear neither has fully convinced the other – but they definitely respect each other and their positions

But I do think that this whole debate was largely lost in the shenanigans as well as the dubious trope of the men partying and reminiscing while the only woman was with Cassandra getting all weepy over the manfolk… ugh not a great juxtaposition.

The second theme is much better done – is Eve’s trying to train Ezekiel and is convinced that Ezekiel has such vast potential because she saw it at the end of last season. She is determined to train him to become that man

But the reason I love this is because he is clearly becoming that man DESPITE her training. She isn’t going to mold him into that person, she isn’t going to force him into it – because he, Ezekiel, is already on that pathway and is already on the way. She tries to get Ezekiel to step up while Jenkins continually derides Ezekiel as a complete slacker. But throughout this episode Ezekiel has been stepping up – not because they heckled him into it and certainly not in the way they expect him to – but in his way using his tools, his skills and his knowledge.  He doesn’t change for them.

And this is why it is awesome. Because he doesn’t become the responsible, capable one because they Teach Him To Be This. He IS responsible and capable in his way, through his context, how he wants to be – there is not argument that Ezekiel has to change: but that Eve and Jenkins need to realise that Ezekiel IS awesome even if he doesn’t fit the form they want him to. And we’ve seen this before – we’ve seen how Ezekiel does step up – but that doesn’t mean he isn’t the fun loving rogue, who also loves his technology and has a great deal of irreverence.