The Uncanny Resurrection of Abraham Carver by Vincent Cross 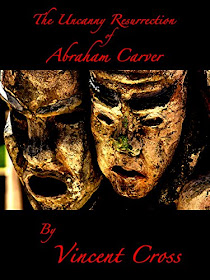 This book is both very short and very beautiful. The language used is extremely elaborate and artistic- and it works. Normally I’m annoyed when language seems to be an overly frilly barrier towards actual interpretation of the work – but this works because the visuals are clearly the main element of this story. The beauty and artisty, the evocative mental images, the powerful, heady emotions – these are why this book exists, why this story is there

But I’m left wondering what this is? Because is it a story? Is it long enough to be a story? Does it have an established enough plot and characters and world setting? It feels more like a snippet in a longer story, even as a short story it feels so much like a part of something greater. It’s more like an artistically crafted Vignette. An out take, a snapshot. The whole feel of the story makes me think that it’s more about an artistically crafted image more than a story. This is a scene, this is a display, a performance. It’s an artistic craft of elaborate, beautiful, stylist language with an intriguing concept and a lot of dark edginess.

It’s been pared down to just these elements with the rest dispensed with. It kind of works here because it’s clearly what the point of the book is. And it works as this. It really does – it is beautiful and stylish and quite excellent to read

But is it a story? Is being a story the point?

But a lot of the sex around her is depicted in a violent manners. However mist of the sex is simply rough and fantasies – with a sex club where consent is expressly included at the beginning. But then it also seems to include some members who don’t get to say no and the way sex is described is expressly meant to emphasise the violence and the imposition of something a big strong man is doing to a woman, even with the expressly described consent. There’s also a scene where our protagonist feels she has to offer sex to a man to save her husband. He doesn’t force her, demand or even hint – but she offers because she can think of nothing else she can offer.

This club also depicts bisexuality – but the underlying tone is “oh look how perverse this is”, with faceless, nameless people having sex as set dressing.

I leave this book feeling it was an emotional, evocative and elaborate read, but equally wondering exactly what and why I was reading it.