Unbinding (World of the Lupi #11) by Eileen Wilks 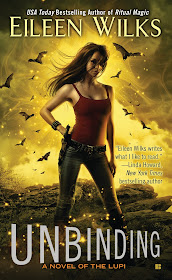 But it’s soon clear that destroying a magical artefact imbued by a god of chaos has ramifications. They may have foiled his plans, but the god of chaos is now out and he may be dead but he is powerful and looking to change that

All the while Kai still has decide what she wants to do with her life. She loves Nathan and she has a unique powerful talent the elves can help develop – but does she want to be the human in the Court of Winter, separated from her friends, divided from her culture and often derided by the oh-so-superior elves?

This is my brain on this story:

Brain 1: It’s a book without Lily and Rule. This is going to be interesting because we’re going to get to see this world through a different lens. We’re going to see a different mind set and excellent part of the world setting that Lily would otherwise not notice. This is an excellent way to open up this world when we’ve excellently established Lily is the central protagonist so it isn’t a distraction

Brain 2: But but but, Lily was established as protagonist because she’s super awesome and amazing. And I’ve had several books of back stories to make me not only be invested in Lily but be thoroughly cheering her every move. Who is this Kai and Nathan and why do I care? They’ve had, what, one short story and a couple of cameo appearances? I am not invested enough in this people for them to displace my awesome Lily. They’re far too external to the main plot, the main battle etc to be really relevant to the rest of the series. It feels more like a spin off series – hey an awesome spin off series –but now these people are stood in Lily’s space. I don’t know half of these people We keep getting revelations and shocks about these people that completely miss because I feel like I’m supposed to have read 4 other books to actually know who they are

Brain 1: But this let’s us examine so much of the world building is accessible here! Lily sees the elves as an annoying enemy and is pretty much not that involved or invested in elven culture or world building and her practicality makes her tolerate the need for Cullen’s theorising but definitely not being willing to run with it. Kai is front and centre in elven culture, sidhe realms, dramatis personae who are constantly mentioned actually appear in this book. We meet them and the depiction of elven society is awesome – we have such an awesome building of a completely alien culture, different standards and values and ethics. As well as a really really interesting take on the concept of the Fae Queen of Winter – not just a queen of cold, but a queen of hard truths and a queen of the warm winter hearth. Definitely an original take

Brain 2: but but but Lily isn’t invested in all of this because it’s not relevant. And I love the world expanding, I really do. I love the world setting. I love expanded world setting. I love how Kai brings her own views and conflicts to this huge world setting. But we already had one book where a new big bad muscled in on the whole storyline and now we have another one? Sure there’s more than one thing happening in this world – but while Rule and the werewolves and Lily are dealing with their enemy perhaps undead elven gods of chaos can go get their little party together in a city other than San Diego. What is the enemy and her minions actually doing while we have a hiatus anyway?

So I’m left thinking I loved loved loved this book and would also be a really awesome… but also feel this excellent world has reached a point where branching into spin off series would be better arcs than protagonist shifting when the protagonists have such disparate goals. If Kai and Nathan and Lily and Rule were actually aiming at goals that were closer together then they would work as shifting protagonists. But the only real reason Kai and Nathan are there is because a random occurrence pulled them in and there was a brief coinciding of goals with Lily and Rule

Ok, maybe I’m being harsh here. I mean, the random occurrence happened was a direct result of the enemy’s plotting. And the big wave of magic is definitely – or should definitely – cause more magical hijinks for Earth than just the Lupi’s great enemy popping up. And maybe Rule is singularly focused on this but Lily is an FBI agent and member of Unit, if some magical unicorns start shish-kebobing random commuters in Wisconsin, she’s hardly going to check out and say “hey not my monkeys.”

So is this a different direction the book are taking? Not just Lily/Rule vs the Lupi’s enemy, but Lily facing the endless magical threats and opportunities which face Earth and the allies and friends she has along the way beyond just the Lupi – and beyond even her. But that’s a difficult path to take away from an already well established epic meta plot and awesome protagonist and could go very wrong in a complete unfocused mess – which was exactly my concern about this series way back in book 4.

We continue to have some excellent racial diversity here. Kai is native American – Navajo – though we do hit the Native-American-woo-woo trope really hard here. Netty Two-Horses and Benedict are both prominent characters as well – and both are also Navajo. We have Arjenie, a prominent female character who is mixed race and Nathan, while not human, is definitely dark skinned. We actually have a preponderance of POC characters among the main cast, only Cullen and Cynna (the latter of which doesn’t play a huge rule) are not POC – and a number of side characters: hostages, police, lupi – are all POC as well.

We also have different, skilled, capable women working together, liking each other, being mutually supportive and being actual friends without everyone focusing on one character. Female team work! Female friendship! Female peers! No female loathing!

We also have some excellent character nuance with the Big Arsehole cop – who is an arsehole and damn good at his job – as well as Kai’s revelations about elven culture, painting people with too broad a brush while also assuming they’re superior in ways that just don’t follow through

LGBT inclusion is… fraught. As has been said previously, elven culture assumes universal bisexuality (kind of making not only LGBT people the alien creatures but also making BEING LGBT alien)… which comes with considering non-bisexuals perverse. So, yay, more homophobia. And the actual only depiction of a bisexual character here is a murdering, chaotic rapist enslaving people… this is not inclusion. Don’t do this.