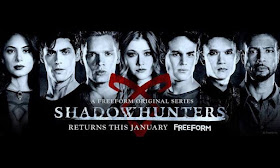 So last episode we had Jocelyn killed, Alec doing the killing, and everyone kind of angsty. So let’s continue that

Now, Jace saved Victor-bad-guy who runs the Clave in New York and because of this he has been exhonerated of being a terribad awful traitor. Y’know, I think he is still kind of traitorous since he did, for no apparent reason at all, support Valentine for all that time. But hey, everyone makes terrible bad decisions all the time on this show

But one good decision is Victor decides that Jace shouldn’t be leading missions and grounds him to the Institute – for saving him. Now we’re supposed to all think how terribly unfair and mean this is to Jace – but Victor makes sense. Jace decided to save Victor rather than stopping Valentine run off with a powerful magical artefact: he is emotional, undisciplined and doesn’t make good decisions and can’t be trusted to follow orders. These are reasonable points.

But this show has never been reasonable.

Clary is not going through the normal stages of grief because a) bad acting (seriously most of this episode there is no indication that Clary is bereaved at all and her tone is identical to what it always has been) and b) she intends to use warlock magic to bring her mother back from the dead. Everyone tells her this is a terribad idea. She doesn’t care. Of course she doesn’t.

She goes to Magnus because he’s the warlock everyone goes to when they want something because he’s everyone’s favourite servant warlock. He says this is a bad idea and, for once, actually refuses them. Yes, Magnus can say no. Let us mark this on the calendar.

Magnus is also there for Alec to talk to – about his guilt over Clary. Y’know I’m happy for Magnus and Alec to talk since it doesn’t happen often enough or long enough – but it would also be nice if they actually had a relationship at all. Whenever they meet it’s to talk about other people and Magnus providing a lot of emotional labour and support – but they’ve kind of fastforwarded to this point. They’ve got this connection which allows Alec to confide in/rest on Magnus but no real attempt has been made to actually build that relationship. They’ve basically put a gay and a bisexual man in proximity with each other and declared that they have a relationship now. It’s not just a terrible trope but it’s how neither character has actually been developed so much as just pressed into service

Which we see again, with the added impetus of guilt Alec is the only one willing to follow Clary to a warlock she’s found willing to perform the Black Magic Magnus refuses. Alec knows this is a bad idea

- And my gods this idea is the worst idea ever. Everyone tells her her mother could come back as a demon. The warlock she goes to doesn’t even believe dark magic is dark. Oh and her fee is “an unspecified favour to be repaid at a future date” which should raise all the red flags (but hey, I guess Clary is shocked to find a Warlock who doesn’t just give her what she wants with no fee). And this has to be signed by a blood oath.

So many red flags here. Alec disagrees with this entirely but because he’s Alec he also does pretty much nothing except make nice to the kids at her house (she’s running a warlock breeding program since warlocks are quite thin on the ground and Valentine wants to slaughter them). This warlock also wants to use Clary as breeding stock

Clary decides, belatedly, that this may be actually a bad idea after all but she’s already drunk the Warlock’s potion (because of course she has, this is the world of terrible decisions)  and finds herself imprisoned with a demon intent on raping her to breed new warlock babies. Alec fails to be any use whatsoever, because he’s Alec. But Izzie and Jace show up and save her

Clary also pulled out an entirely new woo-woo ability from nowhere because she’s just that special. Because she’s Clary, she and Jace decide that there’s absolutely no reason to mention this to anyone who may know anything about this.

Over to Simon, after helping Clary with funeral rites, he goes to his mother and decides to move back home again.

That should be simple, he just has to stay out of sunlight, sleep all day, not eat any solid food and keep drinking blood without his mother of his friends finding out

Clearly hanging around with clary has begun to affect his decision making abilities.

It goes epicly wrong and Simon ends up telling his mother he’s a vampire. She, naturally, doesn’t believe him – until she finds him, fangs and all, snacking on rats.