Outcast, Season 2, Episode 4: The One I'd been Waiting For 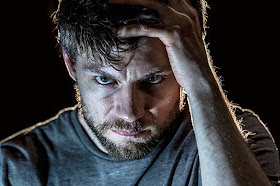 After last episode, this episode feels much less dramatic and important. Mainly, i think, because this episode is focused on the two people most peripheral to everything actually relevant to this show. Anderson and Aaron.

See Aaron has gone home to his mother Patricia who is desperately happy to see him again and super sad about his burns and above everything, despite, all evidence to the contrary, convinced that Aaron is a good man.

She is, of course, very very wrong and Aaron wants to be dark and evil and he’s already prepared for possession and primed to absorb all the dark shit in the world and all kinds of bad things. Basically he needs all the therapy.

He calls Anderson and taunts him before stabbing his mother, painting an inverted pentagram on the wall, painting his room black and screaming “You’re not my real dad!” before disappearing

His call to Anderson, annoyingly, interrupted the exposition which had Junkyard guy (I Think I need to remember his name soon). Basically the woman he’s buried (and now dug up for their viewing pleasure) was called Helen - and she was the Sidney for the last lot of demons/spirits/aliens/whatever they are who Kyle’s dad duly dealt with because he was totally into the demon slaying. Kyle, however, is furious that his dad wasn’t at home and instead abandoned him and his - I’m going to have to stop you there Kyle. With Aaron running around we are already waaaaaay over our daddy issue quota.

So Anderson gets to Partricia in time to die in his arms, because everyone knows a fridged woman has to die dramatically, preferably in the arms of her love interest and Anderson starts to swear vengeance and make… I was going to say a lot of grief and rage based decisions but, really, Anderson’s decision making isn’t exactly spot on at the best of times.

This involves lots and lots of Anderson trying to hunt down Aaron on his own. The best part of this is Kyle pulling a whole “if we become monsters fighting the monsters then we’ve lost!” speech. I’d repeat it - but doesn’t EVERY half-way dark or gritty series have one or two of these? You know the drill. Also Anderson kind of wants to murder a severely injured and traumatised teenager which, y’know, not great. Anderson is full of fire, brimstone and killing the evil

I wonder if this is just him venting not just his Manpain over Patricia but also an outlet for the reverend who has found all his religious pantomiming does nothing against the the demons and needs to reclaim some level of effectiveness and feel less impotent?

A part of this is the sheriff desperately and really emotionally trying to stop Anderson from basically killing himself, also revealing why they are such close friends. Basically when Giles first became sheriff he faced a whole lot of racism and he was set to just endure it when Anderson got up in front of his congregation and told them all to cut it out. Ok, it’s good to explore this because often television shows include POC they do so by dropping them into a racism free zone so they don’t have to address the reality of how POC are treated. And I can see why Giles appreciates Anderson being the lone voice and being willing to use that voice against bigotry. But it also reminds me of Patricia chiding Giles that she supported him - there’s a sense of “I’m not a racist shit, so I’m owed” even if not expressly stated (and not as much here as with Patricia). Consider how much Giles has put on the line for Anderson repeatedly, time after time and this is the foundation it does create an impression that Giles “owes” Anderson.

Aaron raging around causing hassle also gets to Sidney’s ears (via officer Munoz who is one of his). He’s also not pleased when Eleanor tells him about the Junkyard kidnapping showing they have even more enemies, Sidney is getting frayed round the edges. This shows again when he goes to see the Mayor (yet another one of his!) to get Giles replaced by Munoz as sheriff only to find the Mayor isn’t malleable. He may be possessed by he liked the person he possessed and liked the friends who came with it - including Patricia who just got murdered by Sidney’s pet psychopathy

He also makes a dig at the body Sidney possessed and I think this is an interesting point. We’ve seen a number of these demons and possessed people be quite human and humanised - as the mayor said of his body, he was a good man and had good friends. While Sidney possessed a paedophile serial killer - perhaps Sidney isn’t humanised by his host because his host was pretty much vile to begin with. He hasn’t been pulled to humanity as he hasn’t had the human influence

Aaron and Anderson have the big show down where Aaron plans to burn Anderson to death after repeating his line about being so very very evil and how he’s going to be possessed and end the world. Alas, before Anderson is put out of my misery, Kyle saves him - he runs after Aaron but he’s picked up by Sidney who is definitely getting sharper and more agitated.

Through this we also have Megan who is wounded and lost. She can’t go home, she can’t think of anywhere else to go and Holly is hurting as well (and still blaming her - even telling random strangers her mother killed her father). It’s an extremely good performance of how lost and broken Megan is (and really could do without the Aaron interludes) until she finally ends up at her mother’s house with nowhere else to go. And there are issues here - Megan says that her mother basically neglected her in favour of the children she fostered and, interestingly, her mother doesn’t exactly deny that: merely says she made a mistake. Definite issues there. On the plus side, Holly seems to have accepted Megan is possessed - on the minus side she’s terrified of it happening again and relying on her grandmother’s religiosity to keep it at bay (which is clearly something Megan isn’t comfortable with).

Kyle has had his own issues as well - combating both his clear ongoing resentment of his father for abandoning him including when his mother was possessed and outright torturing Kyle. I like the complexity of this - because knowing his mother was possessed it becomes hard for Kyle to be angry at HER for the abuse - so his father, not being there to protect him - is a viable target of that anger. But now, speaking to the Junkyard guy, he realises his dad was like him, his mother probably didn’t believe him and either way his dad didn’t want to bring evil to his door, it becomes hard to blame his father as well. He even tries to blame Junkyard guy for not trying to let him know what was happening to which he has what may be the line of episode - he likes keeping his head in the sand

Clearly the fight took a lot of out him and the people he was close to - he doesn’t want to revisit it and he’s pretty clear he doesn’t owe Kyle or anyone else to get back into this mess. It’s a nice point

He does tell him about his dad’s old place which has been mothballed for a while. He goes there and finds the driver’s licence of the dead, buried woman (the ex-Sidney). Her name was Helen. And in the back room he clearly finds the torture chair she was tied to while his father exorcised her.

Kyle clearly can’t handle this and flees the room. I think it’s another revisit to the “be careful you don’t become a monster” theme. He can see what his dad and co ended up doing - and he doesn’t want to be part of that