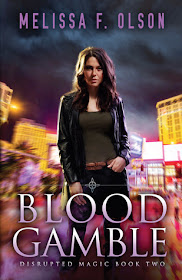 Scarlett does not want to go to Las Vegas. No, not even if there are two vampires putting on a show that may reveal the old world. No not even if Dashiel is paying her a huge sum of money. She’s not going


But Vampires don’t take no for an answer and with Dashiel manipulating her sister-in-law into going she has to try and protect them. But there she encounters something far more deadly than Dashiel expected… she could come home, but who but Scarlett will stop the death toll rising?

I would describe the world building of this book as solid and balanced and… disciplined. That seems like an odd word - but so many books have an anything-goes-magical-world and then decide ALL THE THINGS must be included so you can’t even go to the local shops without tripping over 2 leprechauns, bumping into a kitsune and dodging a Wendigo.


This book is excellently focused on the three major supernaturals - vampires, werewolves and witches, while clearly having a world with more out there but not allowing those swamp the book - instead we have nice additions without losing the focus
And I like how he implications of Scarlett, a null, fits into that - from alleviating the werewolf curse which is such a relief at times, to vampires being disturbed by actually feeling cold/hunger etc. I like the nuance of it.


What did surprise me about this book is the ending. There are elements I didn’t like - but I will say the whole thing completely surprised me - the twists and turns are completely beyond what I expected. Honestly, the ending and what happened with the characters was definitely not anything I expected as I read along. Throughout the book the plot goes in ways I never expected - the culprits were completely not what I expected. The way Scarlett finds the answers, balancing her friends, the threats and getting to the bottom of things is also a really original unexpected direction.


The plot does have moments where I think Scarlett seems to make some pretty huge leaps at times - like the whole Skinners storyline seemed to come from nowhere. Like we went from not even knowing Skinners existed and then suddenly decided they were a major threat without any real indication that they were present.but suddenly everyone focused on them


That aside the twists really make this plot. There’s action which is really well done, but not a lot mainly focusing on the investigation since Scarlett has a very unique power which isn’t necessarily a combat monster but definitely dangerous, following leads and balancing just how much Scarlett actually wants to be involved in this dangerous investigation.


I like Scarlett’s own development - she has that nice balance between her being duly concerned with her safety and the people she cares for alongside her compassion. I actually kind of like how Dashiel pretty much twists her arm to make her go - yes it’s coercive but we’re not talking a love interest here and, let’s be clear, the Cardinal Vampire of Los Angeles is going to be a ruthless user of people because, hey, master vampires, I don’t expect fluffy fluffy niceness. And Scarlett pretty much recognises this and doesn’t expect more. But I do like that she isn’t going to put herself at risk just because Dashiel says so. I like a compassionate protagonist but being a complete martyr is an overdone trope; especially female protagonists who are often not allowed to seek their own advancement.. Compassion moves her, as does threat and money - and it’s ok for a protagonist to be somewhat self interested. Of course that then falls apart because she’s only gathering a huge amount of money to help pay off her brother’s son’s massive medical bills


No, really, women are allowed to want money. It’s ok.


I’ve so far read two books in this series (and i really need to read the previous series here) and I can really see Scarlett evolving - I quite like how she’s coming to realise her role in the world and the effect she has and instead of doing the common resistance to her role as we see a lot, Scarlett kind of just embraces it and really steps into the role of hero, not doubting her capabilities and sure she can get the job done when it’s pointed out to her.


We have several POC, including Scarlett’s main love interest and fellow null who is Black who plays a very prominent and pivotal story role. He’s a major character with a lot of complexity and clear history in the story- but I am very not happy with what happens to him. We have Cliff a gay POC who serves as Scarlett’s driver and bodyguard… he’s less prominent and I’m not sure whether his discomfort with supernaturals and doing-it-for-the money stance means he’s likely to be kept around. We do have a witch who is revealed to be in a relationship with another woman who plays a little more important a role but is fairly on par. Both of these kind of do the whole one-line-and-never-mention-it-again thing but they’re good characters besides. We also have a series of other minor characters including a Indian witch with a lot of power and potential albeit a minor role. There’s definitely a major push for diversity in this book, though it’s more foundational than really there.


This book reminds me that i really need to explore not just this series, but this whole world - which seems to be several series in the same setting. The writing is good, there is a definite attempt at diversity, albeit not flawless but heading towards good and better than many, the stories are interesting and very original, the pacing excellent, the characters have me hooked and the world is awesome. I need to dive into this one