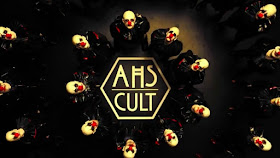 This episode annoys me for a whole other reason (actually it annoys me for several reasons, because it’s American Horror Story and perhaps the worst season there has ever been and my gods that is saying something). Because I can see what this show could have been, perhaps should have been. Perhaps it even was. I say again, I think this show had a whole set up and then all the political stuff was added very late and very clumsily

Here we have Kai, the cult leader, recruiting. And the depiction of how he does it is excellent. We see him approach the Wiltons, they’re desperate, they’re being foreclosed on, Meadow is facing rising medical bills because of her cancer and has lost her job due to being sexually harassed. Harrison’s wages don’t cover the bills and he faces degrading, discriminatory treatment at work for being gay. Throw in that both of them are in a trainwreck of a marriage which clearly isn’t satisfying for either of them and they are vulnerable, marginalised people reaching rock bottom.

Exactly the kind of people a cult leader could prey on. So in steps Kai, clearly having done a lot of research on them to offer Harrison hope and positive affirmation and righteous indignation over how he’s treated (It’s not without problems - the straight guy claiming he doesn’t believe in labels is endlessly annoying and a trope that needs to die tomorrow). Week after week Harrison clearly becomes more and more dependent on Kai’s support, Kai throws in big classic bombs of loyalty and friendship and support (and some clear sexual inducements as well). Before finally pushing Harrison to outright murdering his boss. And then helping cover it up while Harrison is distraught and confused, Kai is there to make it all ok.

Meadow finds them disposing of the body but she is so down herself (desperate enough to beg drugs from passing strangers and offer sex for it) that she doesn’t even seem shocked: another perfect target for Kai. Harrison even introduces him to her as “someone to believe in”. We see her drawing clown sketches and masks for Kai. He praises her art constantly in classic “love bombing” fashion

The next recruit is Beverley, she’s a Black female reporter, reporting in serious crime and violence. And she’s being constantly sidelined: first by general disrespect and multiple times her reports are interrupted by sexist Trump-speech-pussy-grabbing until she finally snaps and beats someone for it. She gets checked into a psychiatric facility before returning to the news only to come back to Serena. A young, white, pretty reporter who is getting to the top by sleeping with Bob. While Beverley works hard and goes to gritty, messy locations to report serious issues, Serena produces fluff pieces in comfort (like wine tasting) and is given massively preferential treatment both because she’s sleeping with the boss and because that’s a harsh but not wrong comment on the state of news media.

Kai, again, does all his research into her, sees where her grievances are and then approaches her while she’s mid-tire slash to offer support and understanding and confidence and affirmation. He has some understanding words to say about what it’s like to be a Black woman: with half the people dismissing her accomplishments as a “diversity hire” (and we even see her saying they won’t fire her token Black reporter - but they won’t respect her either) and the other half making nice speeches about how hard it is for her but not actually doing anything to change the system. And he plays into her anger, her rage and she has a really dramatic powerful statement on what that’s like. Though still, despite his plans to take over the world through fear (which are terrifying and powerful and scarily possible - seriously the show sold this very well), she doesn’t believe in him. She doesn’t believe in anyone. Not even herself.

So some days latter Serena is brutally and savagely murdered on tape, by clowns (the same masks that Meadow designed) and Beverely realises Kai did it. Kai did it, for her. She goes to Kai, almost tearful, while he declares again how he’ll do anything for her. It’s love bombing, again.

Again, not unproblematic because Serena is a grossly misogynist caricature and more looking into the fact she also has her back to the

There’s also, obviously, the very classic trope of the Angry Black Woman which Beverley not only represents but is an avatar of. But we don’t just have a Black woman who is angry because Black women are angry - she’s angry for a damn good reason; because of racism and sexism. She’s not just angry because angry. It’s still a trope and it is a damaging one but it’s reasoned anger at least

And there’s a problem that “doing anything” for a Black woman is murder and “doing anything” for a gay man is not leaving him with blue balls - the tropes are there and it’s still American Horror Story, but this core of taking the desperate, the dispossessed, the people who have every reason to have given up, to despair, to be angry and then love bombing them, offering them belonging, affirming their anger, giving them targets to blame and then DOING SOMETHING is powerful and dangerous and how cults can work.

Of course, it's highly possible that I've just expected so little of this damn show - I'm just so used to them failing so utterly that them even getting close to approaching a level of awareness - even shallow and extremely trope laden awareness with multiple problems - is still way more than I expected

In some ways it would even work with his support of Trump. Not because he supports him - but because the fear and marginalisation he causes creates exactly the kind of vulnerable people he can prey upon. But it still feels like a clumsy last minute addition.

There is, of course, a classic straight white male saviour here - especially since Kai both exploits their marginalisations and then dismisses them (eschewing labels with Harrison, calling for “equal power” with Beverley) but that works in the context because he IS using them, he is exploiting them; which in turn is classic. A straight white male saviour pretends to understand to recruit the desperate but his understanding and practice is still shallow and erases the very things that made them desperate.

Obviously we can now see that Kai has fixated on Ally to be his next target which is what the last 3 terrible episodes have been trying to cover… and maybe how Kai is moving on to MAKING his victims desperate before moving in as saviour. But it’s still so clumsy

Again, I can’t help but think that this - this chilling, aware, terrifyingly insightful look into the formation of a cult was the original intent of the season. And then the last 3 episodes of caricatures and clumsy politics was just added later. I mean, I can look back and see how it was all manipulated by Kai, but still it was clumsy and annoying and offensive and ridiculous - and contrasts so sharply with this episode that covered this so well.

Sadly we still have political stuff - Ally and Ivy arguing about Jill Stein, Ally assuming Trump could never possibly win and being massively complacent. Winter and Ivy attend rallies with Winter offering support to Ivy when she’s sexually assaulted by a Trump supporter.

But Winter seems to be offering support to a disillusioned Ivy (who is clearly already having issues with Ally) and she’s so angry - encouraged to anger by Winter. Invoking the misogyny and injustice they face… and recruiting her to assault and kidnap the Trump voting shop assistant who sexually assaulted Ivy to stop him voting. Winter then goes back to Kai and fills him in.

Kai goes to see him with a saw. The man, Gary, cuts off his arm so he can go to the polling station to vote Trump: preying on his sense of entitlement for being a straight white man and to vote against everyone who looks down on him and how humiliated he feels.

And, again, this feels like a clumsy add on. We had the long detailed explanation of what Beverley and Harrison went through, how their lives led them to be vulnerable and how that led to cult recruitment. While Gary just feels humiliated because talk show hosts say things he thinks are mean and 2 women tied him up after he sexually assaulted one of them - and he’s willing to cut his own arm off? Or how Ivy could apparently be incited to kidnapping so quickly. It’s like two different shows - the base cult and then this extremely clumsy addition hammered on top