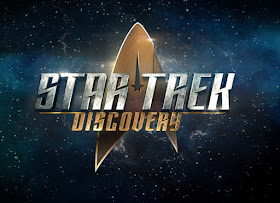 Another episode of Star Trek: I Am Not Fucking Impressed, also known as STD which amuses me because I Am Five.

So Culber is still dead and Stamets is still near comatose. At least this can’t get any worse…. Oh yes, Culber is found in babbling Stamets’s arms so everyone assumes Stamets killed his partner

Let’s cover this now so I can stop thinking about it. So Tilley steps up in eight kinds of awesome to try and help Stamets because they think that’s better than any medical intervention. She has some great ideas assuming Stamets is confused, based on his brain scan, that his brain is all connected to a thousand worlds and places so needs magic mushrooms to be healed.
She also says how special mushrooms are because they’re they only thing that connects life and death… because… rot? I mean… consuming the dead isn’t a mushroom thing?


Anyway she thinks she can add spores and fix him. And does such a good a job that Saru is full of praise and they’re planning commander training for her and it seems to work… and then Stamets apparently dies

No, really, I think even the writers for Da Vincis Demons, The 100 and Constantine (my current lines for writers whose homophobic fuckwittery requires them to be stoned with Angry Armadillos) would draw the line at going through the media saying “our Kill the Gays trope is special honest!” and then kill your other gay character in the next episode. But, hey, fuck you for suggesting even for a moment that we had yet another gay death on this show. How about no more killing or labotomising your gay characters, pls thnx, ‘kay?

He does, eventually, come back to life but his mind is now wandering around the pretty blue mushroom forest of nifty fibre-optic effects. There he meets… himself! Who was waiting for him to arrive to get on with special mushroom work.

Hey, Star Trek Discovery, if your “epic romance” ends up with Stamets and Culber in the magical mushroom forest we will not forgive you.

Michael does some excellent voice overs about how utterly traumatic and horrifying the Mirrorverse is, how everyone lives in constant fear and it’s full of all the awfulness ever and how she desperately relies on Tyler to be her rudder while facing the terribleness of this world, trying to fit into it and not be corrupted by it

Which is obviously a major parallel to Tyler who is, pretty much confirmed, to be doing exactly the same thing albeit as a klingon. But he calls Michael his “tether” - basically the subtext is that he is stopped from being all Klingon because of the power of love

Oh gods I hate the power of love trope so much - but honestly this comic makes it so much more fun.

Michael also meets Mirror-world Saru. He has no name, he’s a slave who exists to attend her grooming; which Michael tolerates while clearly deeply torn and tormented by having to tolerate such an impossible offront to everything she holds dear.

When she contacts the Discovery and Saru (with some lovely words of confidence from Tilly) she can’t bring herself to tell Saru she’s seen his mirror-version - and he can’t tell her that Culber has been murdered.. She also can’t just send the data they need to the Discovery because it’s huge and well encrypted

We see more of the Terran’s awfulness with crew being sentenced to death by being Transported into space for the crime of “Malicious thoughts against the Emperor”.

Michael continues to be concerned by how it is getting easier to play this role and she worries about how all these people ARE human - this darkness does exist in all of them. This potential for evil is in all of them. Tyler is definitely someone she’s clinging to

As part of holding on to her morals, she names Mirror-verse Saru.

While working on a way to send the data to the Discovery they get a message from on high - from the Emperor. The Terran empire has found the location of Fireworld - the Klingon leader of the insurgence. An alliance of Klingons, vulcans, Andorans and more all resisting the Terran empire. The orders are to bomb them from space.

Michael checks with Lorca who insists she follow the orders so she can protect the crew and stay on mission: Michael thinks Lorca may be just confused after suffering so much torture. I think Lorca is pretty much showing his true colours here. Michael responds with an epic speech about how she is still a member of the Federation and the idea of committing genocide against a multi-alien alliance fighting genocidal fascism is truly appalling to her and everything she stands for. More this alliance represents the closest thing to Federation that exists in the Mirrorverse. She’s also extremely impressed that this organisation, led by a klingon, has managed to bring so many aliens together. This could actually be the key to making peace with the Klingons by seeing HOW these Klingons co-operate with others, and how these others can actually reach out to the Klingons

So Michael’s plan is not to bomb the planet from the sky but to infiltrate, ostensibly, gather information to destroy the rebellion, while actually making contact. She does a nice evil snap at her first officer for daring to prepare the bombs and follow orders and showing us, yet again, how the Terran Empire simply could not actually function.

Tyler and Michael head down alone - and personally I think that this just sets them up to be bombed by their own ship and any random Terran officer who wants to murder them as this seems to be the done thing. There they’re attacked by the Rebel Alliance but quickly surrender so they can speak to Voq - yes, Voq if the Fireworld and Tyler/Voq (let’s not pretend any viewer hasn’t guessed this by now) has ISSUES with seeing himself like this, all Klingon like.

Michael proposes a plan, they evacuate before she bombs the planet and she takes back some data they can easily render pointless before she gets to use it and lo the rebellion is saved. Voq concedes that’s a decent plan but he doesn’t really trust her - he needs to have her checked out by Sarek, the Prophet. Yes, Mirror World Sarek, who is Michael’s father figure and allows for Michael to have more angst and conflict. He does the Vulcan mind reading thing and confirms she means them no harm - oh and humans are kind of full of compassion which is all “WHO KNEW?!” for everyone (and me). How he even deals with all of Michael’s memories of him as her dad I don’t even know.

Before putting their plan in action, Michael asks Voq how he managed this - how did he manage to ally with so many other species when the very religion and culture of Klingons should oppose it (to say nothing of Vulcans not having any time for Klingon emotional illogical nonsense); yet here he is speaking a non-klingon language and leading a team

Voq explains.... Well, heresy. At least in T’kuvma’s vision which Voq/Tyler was a devout fanatic of. As Voq talks about co-operation, getting your house together and accepting others and, basically, how they entered an alliance because they had to to fight a greater foe, Voq/Tyler has a breakdown. Sure L’Rell’s prayer didn’t break through Michael’s love, but hearing his mirror self spout heresy after heresy, going against everything he believes and all in Kahless’s name is too much. Tyler attacks Voq, screaming in Klingon and is quickly defeated. Only Sarek speaking for them saves them from murder and they get to return to the ship to implement the plan

On the ship, after handing over the soon-to-be-useless rebellion data, Michael speaks to Tyler privately to basically ask “what the hell?!”. And he tells her the truth. Because he’s a terribad awful spy. She goes into full denial at her lifeline being a klingon and desperately clings to the idea he’s just brainwashed - until even she can’t deny it and Tyler tries to kill her for the terrible crime of killing T’kuvma.

He’s stopped by Mirror Saru arriving and saving her - and can we say again, why does no-one mention that the Kelpians are super-super-super strong? Seriously, he threw Tyler across the room with one hand?! Is no-one commenting on this?

Per Imperial law, Tyler faces death by transportation because this is a Naughty Murder not a Good Murder. Michael insists on doing it and transports Tyler into space…

Where he is transported onto the Discovery. Alive, to be arrested. As Saru loftily explains: they are the Federation, they have rules and he will stand trial. Oh and he has the data they need in his pocket, so bonus.

Michael also wants to leave but Lorca reminds her the mission isn’t done. They don’t know if the data is complete or enough to get them home - they need to know they won’t need her cover story before they drop it.

Of course this is a big ask when she’s lost her anchor is now pretty much alone (Lorca so doesn’t count) and desperately trying to play Terran without being destroyed by it’s awfulness… when a ship arrives and makes it all worse. First it bombs the rebel camp - before the evacuation - almost guarantee a slaughter of the rebellion (and also meaning the data that Michael got won’t be changed so the Terran Empire can probably use that to do even more damage to the rebellion). She learns it’s the Emperor’s ship and we meet the Emperor herself

Who is not shocked by it being Georgiou? Michael needs maximum angst here.

I’m also beginning to think the writers are just looking for leading fan theories and saying “oooh that’s a good one!”

This episode contains a lot of beautiful, vaunted rhetoric about the values of the Federation. Michael’s excellent speeches, her horror over the Terran Empire, the hope she has and sees in the rebellion...

The problem is that this is a whoooole lot of tell and not a lot of show. It’s something that has been missed in the first half of the season: showing us THIS Federation, their values they supposedly hold, the actual reality to match the vaunted rhetoric Michael so brilliantly talks about. Even showing the Federation as an actual alien alliance rather than, y’know, a largely human organisation with the odd alien here and there.

In some ways this rhetoric is doing more for a utopian, less-gritty Star Trek than the previous season and even fits better: the gritty setting the writers love so much is provided by the Terran Empire and not Lorca and the Federation at its Worst. Though, honestly, this has never been my main problem with the show - Utopias take time to build and have… moments… especially in times of conflict and threat. And Michael's conflict and pain is being so extremely well shown with some excellent acting - her story is definitely the more powerful even if we are starting to get a little... excessive with the angst buttons