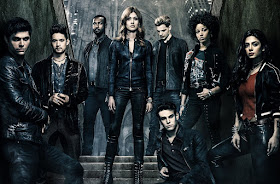 I am officially Team Demon. These people are far too stupid to live

Let’s start with ground zero of humanity’s extinction by their own damn fool decisions - Clary. Proof that humanity has not evolved nearly as much as we think

When we left our less than intrepid definitely not-heroine she had just been imprisoned by the Clave because she decided to stay and wave at them rather than run away. She then went on trial and despite having the shiny woo-woo of being able to escape the sword of truth and occasional genocide, she decided to tell the Clave everything anyway. Namely that she used humanity’s one and only desperate wish that was being reserved to save everyone from possible destruction to resurrect her very annoying boyfriend which then left him vulnerable to possession and he’s now running around aiding the Queen of Edom and probably bringing about said end of the world.

Hey, everyone cool with that?

The Clave is not cool with this.

She is sentenced to death and led out along with a lot of other people, cicle members, the warlock Iris who wouldn’t do magic the Inquisitor demanded of her and possibly other people. Actually I think they’re nearly all circle members. Seriously the Clave has an issue that they have this many Circle members lurking around.

The Clave executes people by burning them to death which is brutal, horrifying, barbaric and repellent (but then, any death penalty is) and utterly savage and any other time I’d condemn this ferociously. Except this is Clary...

To save herself, Clary offers to use her ability to pull runes out of her arse to do the woo-woo that Iris refuses to: resurrect Valentine
Ok, here is the Clave’s logic. Since Lillith has sent Jace to grab a chunk of Valentine’s corpse, they’ve decided to burn his body and scatter it to the four winds so there’s no chance of her ever doing that

Hah, no, that would be sensible. No they’re going to resurrect Valentine and ask him if he knows why people want to desecrate his corpse. So yeah, this is the plan they go with. Clary’s rune works and Valentine explains that he doesn’t have a damn clue, but he did use Lillith’s blood to inject into Jonathan while he was in the womb because he’s evil that’s why. Clary and Valentine make the massive logical leap that she’s trying to resurrect Jonathan

And then Valentine escapes, rallies his circle members and starts slaughtering everyone. Lots and lots and lots of slaughter. Because Clary’s rune also makes him indestructible.

Well fucking done, Clary. She eventually remembers she can turn it off again after pretty much everyone is dead. Valentine is now dead -and evil Jace shows up with suspiciously plot-convenient timing to rip out a dead fascist’s rib and take Clary captive. Yay, she’s captured again

Hey, one of our oldest posts is on Spunky Agency and how a protagonist makes so many utterly ridiculous decisions we want them taken into protective custody to stop themselves being a risk to themselves and others. Clary EMBODIES THIS TROPE.

Time to join the rest of the gang who are all worshipping at the altar of Clary’s stupidity and trying to emulate her. But first let’s hit one of the best parts of the episode - the werewolves telling Luke to go fuck himself!

And I wanted Luke to be an awesome character. I wanted him to have the complex past of shadowhunter and werewolf, balancing his pack responsibilities and being a detective mixed with werewolf vs Clave tension. And what i got was a faithful servant to Clary who didn’t give a shit about his pack, his job or anything else that wasn’t her Clariness.

So when he goes to his pack and says “hey guys, suicide mission to Idris to save Clary? Who’s with me?” he gets a resounding “hell no.” He tries to invoke alphaness and one of his wolves, rightly, points out that they’re supposed to be family. That’s what pack means. Not that he gets an army of sacrificial soldiers to serve Shadowhunters. They add that if he leaves them to chase after Clary then they’re done with him

And he leaves. Which really shows how much he cares about the werewolves here. He doesn’t even rescue Clary because his fellow cops would like to talk to him about the missing murderous partner and all.

Over to the next collaborator - Magnus - who has found a way using lots and lots and lots of power to save Jace. But he needs 12 warlocks so he’s going to have to ask permission to do this. To which Lorenzo responds “yaaah pass thanks”. Warlocks, children of demons, don’t especially want to make an enemy of Lillith despite her incidental messing with the ley lines. Also lining up 12 warlocks in the service of the Shadowhunters who continue to not give a shit about them? Hard pass

Magnus and Alec treat this as being terribad awful unfair because this show seems to have NO CONCEPT of why the Downworlders don’t want to deal with the circle-loving fascist Clave or what utter collaborators Magnus, Luke et al are. Alec decides to try and bribe Lorenzo who responds by expressly forbidding any warlock from co-operating. Well that worked.

Or Magnus resorting to self-sacrificing plan B: contacting his big bad father for the power. Guess which they go for?

Now to a storyline with more poignancy. Jace decides to get at Simon for… reasons - by freeing Heidi from the Praetor Lupus and delivering her to Lillith who encourages her to do terrible things in the name of girl power and solidarity and true love. Lots of cringe here

Heidi goes to Simon’s mother and sister and starts menacing them until Simon (who is even  angrier with Jordan for more fuck ups) rides to the rescue. Their Heidi tries to go all out to destroy Simon though I’m dubious about how she intends to win Simon over this one? She tells his sister and mother that Simon is a vampire - and cuts Sarah, his sister, to tempt Simon

Who hasn’t eaten in some days. And, yet again this kind of shows the magical plot useful insight that this show continually forces on the villains to make their plot work. Because there’s no way Heidi could know Simon is starving because he’s forgotten to stock on blood for some time. I mean, had she not known this her plan would have collapsed as Simon is very unbothered by a small spot of blood

Instead he visibly struggles to stay away from his sister and tries to keep her away. She touches him and his control collapses - and he bites and feeds on his sister. Izzy and Jordan show up to save her, but it’s too late - his mother has seen what he is and seen him nearly kill Sarah and demands he leaves, calling him a monster

This whole scene is, especially for Shadowhunters, powerful, emotional, well acted and deeply sad to watch as Simon falls into self hatred and devastation at his mother’s rejection.

Ok, one of my perennial complaints about Shadowhunters is how servile and compromised the leaders of the downworlder factions are. Luke, Magnus and Raphael, all minorities, all utterly indifferent to their own people while serving Shadowhunter masters who barely consider them people and are quick to dismiss them. In a show which was more intelligent, this would be an interesting way to explore the hollowness of respectability politics and how you can’t buy personhood with service. But this is Shadowhunters and instead rebellious werewolves, Lorenzo and even Raphael when he ceases to be a good servant are all duly demonised as terribad awful for not being loyal followers of her Claryness

So I appreciate Luke given his marching orders and Lorenzo telling Magnus where to jump. We need some push back against this nonsense