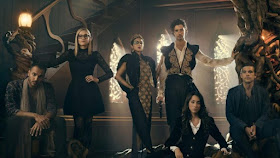 Marina has gathered most of our cloaked magicians together to try and break the spell on them… which doens’t work, doesn’t work at all

She also gets a magical automated voice mail from Henry Fogg telling her to cease and desist and that trying - or succeeding - in breaking the spell that is shielding them will only cause everyone to die horribly.

Marina being Marina, is not going to listen to any automated warnings. More, she realises that the cloaked people must be Henry’s most favoured students, who else would they be? She begins poking and prodding at Penny until she finds the spell that suppresses his Travelling ability (we’ve seen previously that his Travelling ability is non-human magic so isn’t subject to the limitations of magic rationing) which he uses to buzz around quite merrily.

The rest of the group are torn - and Kady puts it best: their lives are fake. Even when their fake lives are awesome (Josh’s biggest conflict is his penis is too big, Penny has legions of groupies and Kady is like a super-cop bordering on a hero) they’re blatantly comic book. No-one really has lives like this.

Marina uses Penny’s travelling ability to nip into Henry’s office, steal his shiny disguise potion and inject him with it - all witnessed by Todd. Her plan is to convince Henry to reveal the antidote to save himself. He refuses, protecting these students is too important to him. He also questions which of the many many many time lines this Marina is from. Honestly, I’ve lost track. I know one of the Marina’s was Henry’s lover but I’m pretty sure that isn’t this Marina.

It has gotten rather confusing.

Instead Henry embalks on a rather epic goodbye session, having Todd record his memoirs and laying out his deep, abiding pain in a moment that would be almost funny if it weren’t so poignant - from his alocholism, his self-loathing, his gambling and his general self destruction. He finds it cathartic, but it’s super emotional as well. We also remember that he is one of the few who remembers all 50 of the alternate time lines - 50 lifetimes all of them ending in absolute horror and awfulness. With that, even magic is a grand and awful disappointment to him. He almost welcomes losing his identity. Todd watches all of this casual revelations from his suicide plans to all his confessions with a growing sense of horror

Until he meets with Etta, his tailor who seems to know him better than anyone, knowing his clothes are a shield to keep people at bay and, ultimately what a good man he is before he breaks down in tears and tells her everything. Including how he tried to make the best lives he could for his “most annoyingly millennial of students” but Marina has doubtless planned something far worse

Someone else who learns the truth is Julia, still stuck in the identity of Kim, who is worried about him leaving since he’s the only one who believes in her (since she’s so bad at magic)... but Todd is incapable of keeping a secret and has told her everything. She realises she is one of the masked people and asks who she really is.

Of course Henry doesn’t tell her - but he can actually talk about it, since he cast the curse he is quite capable of stopping random things killing him from talking about it. He urges her not to poke this for her own safety. He, again , refuses to reverse the spell

And he goes to Marina to have his identity erased and replaced with a homeless person - and Marina calls him dad. And it’s possible among the whole time line thing I just missed that?

But Julia isn’t taking this and she’s been paying attention. She knows magic is rationed now - she can see it as magic fails because the day’s allotment has run out at Brakebills. But Henry’s spell keeps working no matter how much magic there is - and Todd remembers that Henry was working on a massive magical battery. They go to his office and find it - but when Julia touches it it flings her across the room. And kills her

Todd checks her pulse and everything. She’s dead.

And then she comes back to life with a gasp. Well that’s new and presumably part of Henry’s spell? Julia is determined to overload the spell or drain the battery or something. So keeps doing it. And dying. And coming back to life. And dying. And resurrecting

It says everything about this show that we have Julia repeatedly dying while Todd listens to music and is bored… until the spell breaks and everyone is restored to their true selves...

Over in Fillory Margot is lost and stumbling around until she finds one of the magical creatures there. Lord Fresh - the Lord of all Fresh Water in the land who greets her as the High King. He also reveals to a very confused Margot her Birth Rite box (which contains something she can’t access yet), a prophecy about her which also talks about her ruling alone which is somewhat worrisome and vague directions - which she needs because Henry’s spell on her is acting up at all these revelations of who she is and it’s stressing his wards.

And Margot again reveals why she’s the star of the show by being lost, confused, yet still utterly confident and sharp. Even as she’s found by the guards and taken to the castle to be questioned by Acting Queen Fenn and Pick she continues the awesome. They realise who she is by the magic acting up every time they try to say her name and reveal a problem they have: Ember is apparently back but avoiding Fenn. On his return he has filled the air with opium which is having…. Unfortunate consequences. They need to find him

The Amnesiac Margot officially states she really doesn’t care but she wants to find Ember anyway and they follow the trail of his many many many reported parties (much to Fenn and Pick’s shock and Margot’s blase indifference) and find… Ember… or fake Ember.

Which is when the spell breaks and Margot becomes Margot again - there’s an awesome scene of everyone bowing to Margot the true King and Fenn giving her her rightful crown. She turns to confront the intruder god who she recognises - Bachus the eternal partier. Her take down is awesome - but he is a god and promptly teleports her back to Earth out of the way which is awkward.

Also on earth is Quentin and Elliot. And Elliot is still ultra ultra creepy but Quentin in his amnesia has reached his limit - especially when Elliot demands he go grab a wild pig to sacrifice on an alter to summon a greek god. Quentin refuses - and Elliot effortlessly breaks his arm.

Mud, blood and one little pig later - Quentin summons the Greek god Enyalius, the Greek god of war (yes, Ares is out there but either this is another name for Ares or we had one god representing the destruction of war and one representing soldiers). Oh and Elliot is cute and really cute with the little piggy. He’s good at this.

Elliot promptly guts the god to search his guts for something, something that was taken from him - and apparently is embedded in his guts? The brutal torture and death is a bit much for Quentin and extremely frustrating for Elliot - because this isn’t Enyalius, it’s a lackey he sent to take the hit for him, he saw monster!Elliot coming.

Elliot is not amused. Which is when the spell falls and Quentin returns to himself - he desperately tries to heal the fake Enyalius… but he’s already dead

That leaves Quentin with the affectionate and terrifying Elliot!Monster.. Who wants to kill Enyalius and alll the rest of them for what they took… which is ominous

He also seems very jealous of Quentin asking for Elliot and his friends back, friends he may like more than him. A jealous super powered monster is a scary one, especially as he teleports them all back to Marina’s apartment - to meet the rest whose own spell disguises have gone down. Elliot has ominous glowy eyes… and remembers they tried to kill him. This will not end well.

Perhaps ending better is Alice, in collaboration with Santa (who is not amused by the shenanigans now done in his name) has found a source of magic (the pneumatic tubes in the library) and uses it to possess her cockroach for some spying

And Elliot and Margot are effortlessly stealing every scene