Once Upon a Time, Season 1, Episode 3: Snow Falls 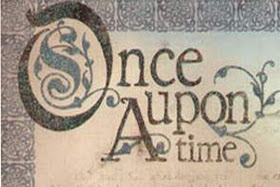 We open in fairy tale land with a carriage ride containing a hot guy in leather (Prince Charming) and a petulant princess who are robbed by a woman. Most definitely a woman who makes this clear with a rock to the head of prince charming. Now that's a fairy tale I can get behind.

I much prefer fairyland Snow. Snow White kicks arse and is cynical about the concept of True Love, while Prince Charming desperately tries to avoid justifying marrying Princess Petulant. And everyone lampshades that Charming doesn't actually have a name (which amused me immensely. The random kiss giving prince in fairy tales is always so anonymous. It's always felt like any man would do if he rescues you/has enough money/titles – doesn't matter who he is). She kicks arse, is edgy, unromantic, cynical, can smack down Charming... and, sadly, still needs rescuing. She does get to rescue him as well – but he's still two rescues to her one.

Fast forward to the much less edgy Storybrook where Mary Margaret Blanchard (Snow White) is competing with a guy to see who can be the worst first date – him by staring at the waitress' backside (and if the waitress can carry food in those heels she deserves a raise) and her by talking about the many many kids she wants to have. It's like a “How To Not Get Laid” instruction manual. This sets us up to see her true love – Prince Charming who in fairytale land was stabbed and now is on life support as John Doe in the hospital (presumably this means when they break the curse he'll die of his mortal wound? Heh, I'm guessing no because that would be one depressing Happily Ever After).

This encourages busy body kid Henry to reunite Snow White with her One True Love (or, well, convince her to stop going on terrible first dates and set her sights on men who can't run away). And, convincing Mary Margaret that it would help with the kid, she agrees to go to the hospital at night (wow they have long visiting hours) to read the book aloud to John Doe. After seeming hours of reading, he responds and grabs her hands (yelling “please stop speaking such drivel!”)

Of course before we go further, John Doe disappears to the woods. So of course Emma and Mary Margaret join the sheriff (what, he doesn't have a police force so when searching the woods he brings a stranger, a child and a primary school teacher?) in searching the woods for him, later joined by Henry

It's at this point I really need to question why Emma gets to run around investigating all this – she gets to watch the CCTV tapes (and make the oh-so-obvious discovery) and go hunting in the woods. She examines Henry's psychiatrist file. She sticks her nose in everywhere. Or why the mayor, if she really wants to keep her away, doesn't report the creepy lady stalking her son? There are ways and means here!

Henry does prove that reading all those fairy tales has made him absorb their values – Snow, stop looking for John Doe! He loves you! Just stand still and make him find you! Honestly, pro-active woman is ridiculous. Hey, how about we find a tower and see about growing your hair out? Thankfully reality reasserts and they go on looking for the dazed coma victim. Some of the worst CPR you have ever seen later (don't they train teachers who to do that?)

So we have happily ever after with an amnesiac John Doe (go get him Mary Margaret!) but, alas, the mayor is there to bring everyone down – and finds Mrs. Doe to declare her love for her newly awakened husband. Thankfully Emma calls bullshit and sees the suspiciousness of the timing – at least we don't have to pretend to be nice with the mayor any more

This week I much preferred the fairy tale to the modern world. I'm actually finding the story quite interesting and want to see where it goes, I'm still intrigued. And while I do dip into the snark, I don't feel the need to swim in it.

The show continues to be as erased as expected and the plot wiffles here and there, the amount of meddling Emma Swan can get away with is quite stunning, really.

But on the whole I'm actually enjoying the show. Yes, it's a positive