The Walking Dead, Season Two, Episode 13: Beside the Dying Fire 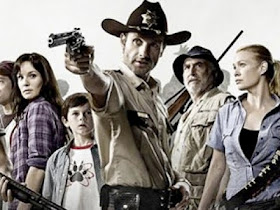 This episode opens with walkers leaving the city in what an only be described as a herd, to head towards Hershel's farm. They stop when they hear a gunshot and start moving towards Rick and Carl. Daryl returns to the farm and tells the rest of them that they found Randal and that he had become a walker.  Daryl tells them that Shane and Randal's footprints were right on top of each, and that means that they were together. Since Shane was most certainly not a tracker, this means that Shane killed Randal.

As Carl asks Rick how Shane died, Rick turns his head when he hears the walkers.  The two of them make a run for the barn.  Inside, Hershel demands that they cut the lights, as Daryl points out that a herd that size will take the house done.  Maggie and Hershel start loading weapons, and he says, "this is my farm, I'll die here." Daryl expresses surprise at the way that Maggie handles a gun, but she reminds him that she grew up on a farm.  It was brief moment, but it was still nice to see a woman behave in a competent manner.

Inside, Lori finally notices that Carl is missing.  You would think that living through a zombie apocalypse would be enough to make one keep a close eye on one's child.  Carl and Rick climb up into the rafters and then drop a lighter, setting the zombies on fire.  Outside, the others get into their vehicles and drive around killing as many walkers as they can.  Even on fire, the zombies continue to try and climb the steps.

The fire is working to distract the zombies, but when Jamie drives over to help Rick and Carl off the roof, he is bitten and eaten alive. Carl and Rick run into the woods, as Carol and Lori panic about not being able to find Carl.   Hershel is standing on the lawn empting his rifle and he ignores Lori as she tells him that it is time to go.  The  others jump into vehicles to escape, and it is only when Rick shoots a walker intent devouring Hershel, that he is finally convinced to give up his farm.  In the process, Andrea and Carol are left behind, but fortunately for Carol, Daryl waited on the sidelines until he could pick her up. To be honest, I was absolutely shocked to see Hershel live through this season.

Maggie and Glenn are driving away from the farm, and Maggie is clearly freaking out.  She keeps talking about wanting to return to the farm to look for survivors, but Glenn assures her that there is nothing to go back for.  Part of the reason this is so overwhelming for Maggie, is because this is the first time she has seen how bad this new world is.  Glenn tells her that he loves her, and that he should have said it a long time ago.


When Carl, Hershel and Rick arrive at the highway where they left supplies for Sophia, he demands that they go back and look for Lori.  Hershel tells Rick that he needs to get Carl to safety and that he will wait until his daughters show up.  Rick tells him that they are going to stick together.  Lori, TDog, and Beth, who has finally left her bed, are in the truck and Lori tells T Dog to head to the highway, because she knows that Carl and Rick will be waiting for them there.  He tells her no and that they are headed for the coast, but Lori will not be denied, and she opens the door to the truck door -- demanding to be let out -- forcing T Dog to turn around.

As Rick bends down to tell Carl that it is not safe to wait on the highway, the rest of the survivors show up. As they gather, they realize that Andrea has been left behind.  Rick decides that they shouldn't stop to look for her because she is probably dead, and that it's not safe to remain there. I suppose it's a marker of how much they have changef Andrea's character that her absence is as notable as Patricia and Jamie's.

Andrea is still running through the woods, with zombies fast on her tail.  She is extremely low on ammunition and is quickly surrounded.  On the highway, Ricks vehicle is running low on gas and they all come to a stop.  They decide to set up a perimeter and camp for the night.  When Maggie suggests that she and Glenn go to get gas, Rick demands that they stay together.  Rick tells them that they will find a place where they can hunker down and be safe, but Maggie responds that they fooled themselves by thinking that the farm was safe.

Rick reveals that Jender told him at the CDC that whatever the virus is, that they all carry it. Glenn is upset that Rick didn't share information and points out that when he found out about the walkers in the barn that he told for the good everyone.  Throughout the conversation, Rick avoids telling them what happened to Shane.

Alone with Lori, Rick finally admits to killing Shane. He says that he knew from the very beginning what Shane was up to, but he just wanted it over.  He admits that he could have stopped at any time, but he wanted him dead.  "I killed him, he turned and that's how I knew that Jenner was right. Carl put him down,"  Rick says to Lori. When Rick reaches out to touch Lori, she backs away from him in anger.  Is it me or, wasn't it just a few episodes ago that she was manipulating him to kill Shane.  I guess this is a case of be careful what you ask for.  It is also worth noting, that Lori is actually upset that the man who tried to rape her is dead. On The Talking Dead, The Walking Dead's after show, it was suggested that she was actually mad herself rather than Rick.

Andrea continues to fight her way of the woods when a walker traps her on the ground. Before she can be bitten, she is saved by a woman with two walkers chained to her.  Yes, this is has got to be Michonne. I am thrilled but scared at the same time.  After what they have done to Andrea, I am worried that they will turn her into another mindless female character. Dear Kirkman, this one time, in the name of heaven, please stick to the comics.

Back at their temporary camp, Carol tells Daryl that they are not safe with Rick, and that she wants a man of honour.  Daryl responds that Rick has honour, and she counters claiming that he is Rick henchmen.  When they hear a noise, the group starts to panic and in frustration, Rick tells them that he killed his best friend for them.  Carl begins to cry, as Rick tells them all how Shane who is thankfully dead, set him up to die.  He tells them to go, but when no one leaves, he tells the that if they stay, "this isn't a democracy any more." On The Talking Dead, Robert Kirkman refers to this as the beginning of the Ricktocracy.   In the background, we can see the prison that comic book readers will recognize as the next location that the survivors will inhabit.

The death toll was really high on in the season finale, but none of it felt gratuitous to me.  I loved watching as the barn went down in flames.  With the exception of Carl, Beth who has finally left her bed, and of course T Dog, there was character growth.  We learned more about Hershel's loss of faith, saw the end of Rick's soft side, and finally saw a little bit of a backbone from Carol.  Most importantly though, we saw the introduction of Michonne.  All hail Michonne.