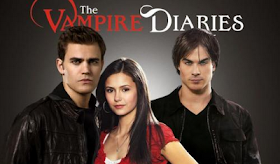 I think that the Vampire Diaries team would have been better off staying on hiatus, than offering the viewers this episode.  As we know, since early in the season, founding family members have been found murdered. In All My Children, Alaric discovers Meredith's little stash of weapons and she promptly shoots him. When he awakes he is jail and Liz believes that he is the one who has been killing the council members.  He tries to establish an alibi but it turns out that he was alone at the time of the murders.  When Alaric tries to convince Liz that Meredith shot him, he learns that she said that it was a self inflicted gun wound.  Turns out that Ms Fell is very crafty.

Elena and Damon are told by Liz to stay out of this and to let her do the investigation.  The moment she said that, it was like an enticement for Elena stick her nose in the middle of things.  Elena prods Damon who asks if she wants him to make a meal of Meredith but Elena is disgusted and accuses him of pushing people away.

Damon returns home to find Stephan with the shakes.  Though he has not had any human blood, the desire is still very strong.  Damon tells him that he needs to feed but that he needs to control it.  The end up discussing the murders in Mystic Falls in 1912.  They ran into each other for the first time in 50 years at the funeral of one of their family members.  Damon is still highly pissed off with Stephan for turning him into a vampire, and Stephan's mission is to try to convince Damon to abstain from human blood.  They decide to have a drink together and for the first time they run into Sage - a very old vampire.  Sage is in the boxing ring taking on all comers for 100 dollars a shot.  When Sage approaches Damon after he kills a woman, he tries to pull away from her saying that he is already spoken for, but she persists and tells him that he needs to hunt, not merely for survival.

At the bar, Rebekah is searching for the tree that could potentially kill the originals.  It turns out that back in 1912 the Salvatores ran the logging mill.  This of course means she is going to have to spend more time around Damon and Stephan.  She doesn't however tell them the real reason why she is spending time with them.  It's worth noting however, that this is one of the few episodes in which Rebekah acted remotely like a thousand year old vampire.


In the meantime, Elena has run into Meredith, who informs her that she really has no idea who Alaric is.  It turns out that he has been arrested twice for fighting and his ex wife had a restraining order out on him before she married him.  In a final slap, Meredith reminds Elena that she dates vampires, so she shouldn't be surprised that her friend is violent.


Elena and Matt decide to break into Meredith's home. Matt asks what they are doing there because he believes that the police have already been through the house with a fine tooth comb, but Elena assures him that they are there to find what the police cannot.  They get into Meredith's closet and discover a secret founder hiding space.  Meredith has the diary of Elena's distant cousin, and they also discover a coroner's report claiming that the time of death originally assigned was wrong.  Before they can leave the house, Meredith discovers them in her closet and Elena and Matt are dragged back to Liz's office.


Elena thinks she has finally found the proof of Meredith's duplicity when she hands Liz the coroners report only to discover that Meredith handed it over earlier in the day and apologized for accusing an innocent man.

Stephan leaves the bar after Damon forces him to admit that he really wants blood.  When they go out on the street, Damon grabs a stray woman and tells her that she is about to have a bad day.  He begins feeding on her which causes Stephan to stop.  Damon tells Stephan to feed but he resists until Rebekah grabs the woman and Damon says that he has to choice to feed or Rebekah will kill her.  Stephan cannot resist temptation and begins to feed savagely. Damon is forced to take the woman away from him, in order to stop him from killing her.  As Damon is kneels over the woman, feeding her his blood to heal her, Matt and Elena show up.  Elena is horrified to find Stephan feeding which of course had me saying, "really?".  Did she not just spend the summer chasing the ripper?


Back at their place, Stephan is very upset with Damon but Damon tells him that he is trying to help him. It turns out that after his feeding on human blood in 1912, he turned savage and Damon is determined not to allow this to happen again.  He tells Stephan that he is all he has.


In Elena's room, she and Matt are having a moment.  Elena tells Matt that she always felt safe around Stephan and unlike her parents, she didn't have to worry that he would die.  This sounds like more selfish blather to me.  Who cares if he is a mass murderer, he cannot die. That's all that's really important here.  Matt hands over the diary that he manages to sneak out of Meredith's and Elena begins reading it over.


Damon and Stephan take yet another stroll down memory lane and they realize the person who killed the founding family members was actually Elena's relative who wore the same ring that Alaric wears today.  Back at her place Elena comes to the same conclusion after reading the diary.


Meredith shows up and Alaric is unwilling to let her in but she stresses that he has to trust her.  She tells him that everything that she did was to protect him and that now the police will search in a new direction. Meredith explains that he has been effected by the ring and that one can only die and come back to life so many times without it negatively impacting you.  She asks him if he has any lost time?


Alaric is still resistant but Meredith insists.  Elena then comes downstairs and tells Alaric that he has to listen to Meredith because she believes that she is right.


Okay, why should I care about this storyline?  I want the hour back of my life that I spent watching it.  They are probably going to wrap it up next week before their next brief hiatus.  This entire episode felt like filler.