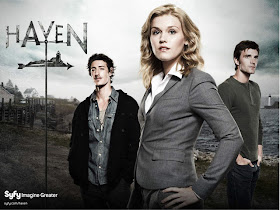 On the angst side of things, Audrey has 45 days before the meteor shower and she disappears into the unknown. Duke is desperately trying to encourage her to make the most of her time, to enjoy life and have a holiday – or, at least, tell Nathan – an Audrey is throwing herself into her work.

And her work is a man out jogging who had his lungs removed – through his mouth. This is watched and photographed by one of the hangers on with sinister music playing, so I assume it’s significant (don’t argue with the conductor).

Audrey tells Nathan about the Hunter when he surprises her with a holiday get away - after she’s due to disappear. Much angst begins but is interrupted by the report that the lungs next to the body were terribly diseased – and didn’t belong to the jogger. They go to interview his fiancée and find she has already been questioned – by Tommy, the man taking the pictures at the crime scene.

There’s another call and they have to rush on to that scene to find another body, some more detached organs – and Tommy crouched over the body, claiming to be a cop. Detective Thomas Bowen, from Boston. He’s in Haven because they had a murder in Boston with someone losing their liver the same way. Upstairs they find Zoe, a traumatised woman – her brother is the dead man.

They set Dr. Claire on her (though she wants to examine Audrey and Audrey is still ducking), before she tries to rush her to the hospital since she’s clearly sick.

Duke has a quick pep talk with Audrey about not giving in to the inevitable – just as he didn’t accept his family  curse to kill Troubled people. And Detective Bowen checks out – and wants to be involved in the case since it was his trainee who was killed and he threatens to call the FBI if they don’t include him in the case.

Any negotiations stall when Zoe attacks someone in the police station, knocking aside Audrey and Nathan until Bowen hits her in the head, saying they’re strong like PCP addicts. In the hospital they find that her organs are failing one by one – and the guy she attacked now has failing kidneys. Time for huge Haven-esque leap of logic that gives instant psychic insight into the Troubles: The Troubled person’s organs are failing – to live they need to harvest the organs off other’s – family preferably since they’re a closer match. If they succeed in the attack, they get new organs, if not, then the family member they attacked also starts having failing organs and needs to launch their own attacks. Not a nice Trouble – and you thought Dwight being a bullet magnet was a bad thing. Personally, I’d get Duke in to stab Zoe at this point. For added confusion – the latest victim and Bowen’s trainee were both conceived with sperm donors, so they don’t know the family link.

At the fertility clinic they find that all the victims were conceived with sperm from the clinic, but from different samples. Detective Bowen points out there was a case in Cambridge with a man who falsified records and exchanged all the sperm samples for his own, fathering many many children that way, and they suspect something similar is happening. Time to delve through the employee and patient records. To help burrow through the records, Audrey call in Duke, which Nathan is less than pleased about.

Tracking the children, they find Miriam – and a man talking to her with a toothy-tube down his throat who attacks her. Duke and Audrey shout and chase him and he runs – and drives off. Miriam collapses to the floor, shaking, her organs already failing. Audrey calls the number plate in to Nathan who has just, unsuccessfully, tried to convince Bowen that the Troubles exist, getting them a name and address of a Harry Nicks who used to work at the clinic.

Going to his house, they find that he has left and, worse, that he has a family including kids to use as spare parts. In the past, when the Troubles were last there, they find that Harry lost his entire family, possibly for organs (Bowen still less than impressed by the whole Trouble talk). They catch up with him and his family – and Harry has lead his son out into the woods. The four of them charge in to save the boy, but he instantly starts to go into shock from organ failure (and Bowen gets to see the demonic tongue).

Audrey tells Nathan to get Bowen and the boy out of there and leave her and Duke. Yes, she has the same plan I do, Duke will save all of those dying of organ failure and that’s why she insisted Duke be part of the hunt. Nathan is worried where that solution ends. Audrey also tells Bowen to go – she will handle the guy with the demon tongue. Duke realises what Audrey wants him to do. She tells him that there are scores of kids this man fathered, all of which will kill their families before they die as well – he’s dying from multiple organ failure, he’ll die anyway but if they kill his curse first those kids will live. Duke is furious that she manipulated him, that she dragged him in expecting this of him, expecting him to become a monster. Duke leaves, refusing to kill.

At the morgue there are many dead bodies, all of Harry’s multiple victims. They discuss things with Bowen who decides he’s not going to tell all the details to his captain, all things considered. And Nathan gives him an open job offer (a police officer who knows about the Troubles is always useful).

But there’s another twist. The bodies didn’t die of organ failure – they died of a bolt gun to the back of the head – just like Rosalie did when killed by Audrey’s kidnapper. And they had their noses cut off, surgically.

Nathan tries to talk to Audrey about why she is so fatalistically accepting her upcoming disappearance, but she pushes him away – and later discusses it with Dr. Claire (this is an interesting way to explain character motives – have a therapist). She’s pushing him away to protect him

Audrey goes to see Duke and tell him that all of the organ failures who hadn’t already died were recovering. And we get a flashback to Duke walking away from Harry, he walked off and saw Harry’s young son, a child, already beginning to show the effects of organ failure. Duke turned back and held a hand over Harry’s nose and mouth, killing him and ending the curse.

Bowen is in his hotel room – when someone picks the lock and starts to enter; he draws a gun. We cut to see him in his car outside the city telling someone he’s done, that Donovan sent someone to kill him. He tells whoever is on the phone that he’s out and he’s going to accept Nathan’s job offer, better off in the sticks than dead. Then he takes a wrapped up body out of his car and buries of it in the woods.

So Haven has a new regular character, Detective Bowen (he’s credited for several episodes) and he’s a Black man – and Haven certainly needs some racial inclusion. On that strength I’m happy, especially since he seems competent and capable. But, last season has a regular Black character with Evie – who was in town under shady and nefarious purposes. And now here’s Bowen, in town, disposing of a body, which smells a lot like shady and nefarious purposes again, I’m leery, I am.

Audrey’s angst over the inevitability of her disappearance is almost very good. After all, she knows of no way to fight it, no way to combat it, she has no leads on her kidnapper, no idea how he’s connected, no idea who the Colorado kid was and no reason to believe that she has any chance of stopping her inevitably disappearance. That is a lot to deal with and she plays it well.

BUT it’d all be far more believable if she actually did any investigating. How many bolt guns are there in Haven? How much research did they do on the Colorado Kid who is still a complete and utter mystery that no-one seems to be trying to pierce. And, above all, why is no-one trying to talk to Vince and Dave Teague who have shown repeatedly time and again that they have a vast number of answers. Or even any of the other older people in Haven who remember the Troubles from before. This whole “oh woe, it’s inevitable what shall I do?!” would make more sense if they at least tried to challenge the inevitability!

Much better done was Duke’s problems with killing Harry. I like how Harry’s death isn’t treated as disposable, that Duke thinks he’s a monster for doing it. I also like that he’s angry at Audrey for using him – after all, even though I agreed with the solution, dragging Duke along and then springing it on him is using Duke as a tool, a weapon, rather than discussing it with him and securing his agreement. Audrey’s use of Duke there was extremely shoddy and I’m glad Duke called her out on it.