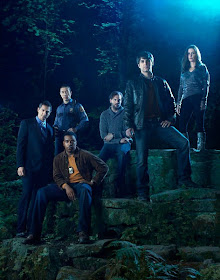 “Whilst he thus gazed before him, he saw a snake creep out of a corner of the vault and approach the dead body”


Captain Renard has a visitor in town – and like all things to do with the mysterious prince, it’s vaguely sinister.

At a bar a man has decided that 3 beers and some chicken wins means a woman (Angelina – remember her?) owes him help “celebrating” and pushes it when she says no. In the car park he grabs her, kisses her and she knocks hikm down. He woges (is that a verb I wonder? Goes all monster-y) into something lizard-like and she responds by going Blutbad and ripping his throat out and then emptying his wallet. But another sneaks up behind her and puts a gun to the back of her head.

Dragged into a car, she is given a choice by a cobra-Wesen, do the job his now dead employee was going to do – deliver something – and get paid for it. Or he kills her.

It’s an episode of date nights!

At Nick’s we have a domestic scene with Juliet cooking dinner – Nick’s favourite meal which she found by seeing “Nick loves” in her handwriting on her recipe book. They have dinner while Nick discusses how they first met. It’s all romantic until Juliet asks when Nick asked her to marry her – and why did she say no. He tells her it’s because she thought he was keeping things from her and they’re interrupted before he can develop that

In a fancy restaurant, Renard has dinner with his newly arrived visitor. She’s clearly another royal and they flirt, discuss high level politics, the fact Renard is on the outs with his family and Renard’s plan to return – when he is ready to return and the conflict with his brother Eric. And the fact one of those people he killed was his cousin. And a slightly menacing awareness that she may, at some point, be on Renard’s kill list.

Monroe and Rosalie have a date at his house – and Monroe is all geeky about his clocks. And they’re both geeky about a musician. And they’re generally cute and geeky. Alas, it is ruined by Angelina showing up demanding to talk to Monroe and being pretty unpleasant to Rosalie. Apparently, Angelina has been hired by the snake guy (a Konigschlange) to kill Monroe.

Angelina wants him to run, he refuses he wants to call Nick, but she doesn’t want to be around since Nick saw her murder the two Bauerschwein last time she was in town. Monroe demands she hang around so she can describe whose after him to Nick and the conversation devolves until their eyes redden. And he calls Nick, interrupting his date with Juliet.

Nick arrives and he and Angelina have the predictable confrontation about those murders – but Monroe manages to arrange a truce pointing out that while they’re snarling at each other, another hired killer could be heading his way. Nick asks how Angelina got the job and when she tells him he’s angry that she killed someone else – which she angrily rejects pointing out he tried to rape her, which doesn’t seem to bother Nick too much, him being more focused on her rising death count.

Monroe is less worried about Angelina killing someone, especially since it’s someone who was out to kill him and they form a plan – Monroe to a safe house while Nick and Angelina snarl their way to follow back the trail. The safe house? Hank’s house.

This leads to Monroe getting to fill Hank in on more of the Wesen lore, including the different levels of Woge – how emotional and stressed Wesen are visible to the Grimm but not to general people unless they’ve really lost it or the Wesen chooses to. And demonstratons of the Woge-levels to Hank

At the bar they find a police detective already looking into the murder of the man Angelina killed. He thinks he was brutally attacked by a gang but Angelina quickly fills in on what really happened while playing Nick’s partner – and doing it in a way that sort of makes sense with her interpreting the scene (yes, I smiled). Finding his wallet the detective recognises the dead man as a habitual criminal – rape, assault and more.

Tracking down the mobile phone, Angelina gets to track down the guy who held the gun to her head and question him while threatening lots of Blutbad violence. His boss has been hired to kill Monroe by someone who knows he is friends with a Grimm – Nick is why Monroe is being targeted.

Back to Hanks to see him and Monroe – and Nick gives Hank the choice to not be involved since it means working with Angelina. Nick spills that he’s why Monroe is at risk and that there’s an unknown Royal in Portland.

The plan to get out of this is a Death Faint, a potion that imitates death so Angelina can pretend to have succeeded and the big bad will back off. They call Rosalie, going to see her sick and dying aunt, and she has the recipe but she doesn’t want Monroe to do it because it comes with a huge risk. Monroe points out if he doesn’t they will come after him again – or any of Nick’s friends, including her. It becomes clear to Angelina how much Rosalie and Monroe care for each other.

He takes the potion – but they have 2 hours. If he isn’t awake by then they need to resuscitate him and if his face turns white or his hands curl, he’s dying. Angelina delivers Monroe and the Konigschlange tests him with his advanced cobra senses – declaring him dead. But they have to wait, while Angelina worries about Monroe’s twitching hands, for the employer to arrive and check. And along comes Renard’s date to compliment Angelina on her ruthlessness and have her paid. She leaves – and Monroe’s fists clench. Desperate, Angelina begins to resuscitate him, much to the Konigschlange and his cronies’ surprise.

Monroe wakes up, they draw guns and Hank and Nick move in. One of the cronies is shot – the other shoots Angelina. She goes down and Monroe leaps on the man who shot her, killing him. Angelina dies touchingly in Monroe’s eyes and warns him that the woman got away.

Nick and Hank return to Monroe crying over Angelina. Nick starts to call someone but Monroe stops him – saying they’ll deal with it their way. He takes her away, buries her under a layer of stones and howls over her grave.

Renard’s date has fled the scene and hurries to the airport. Where Renard is waiting on her plane, having tracked her movements. She asks if he’s going to kill her – he basically says maybe and wants to know everything she’s been up to.

The awkwardness of the amnesia continues very well, especially with Nick worrying that he’s intruding – that sense of 2 strangers who shouldn’t be strangers has been really well maintained throughout Juliet’s memory loss.. And now we’;ve got the interesting dynamic of building a new relationship.

I’m not thrilled with the way Nick dismisses Angelina’s killing a man trying to rape her as just another murder – yes she has a body count but that last one should not even remotely be considered in the same category.

I do like how Hank is actively exploring the Wesen world. He hasn’t said “oooh scary” and hidden under the table and he hasn’t tried to keep it on a need-to-know basis. He’s asking questions, he’s actively curious.

I’m also happy that Hank and Monroe are having their own interactions – too often you get the protagonist and then all the secondary characters are focused on him without much in between them. I’m also glad that Nick gave Hank the option of stepping out of the whole thing if he didn’t want to work with Angelina since she’s wanted for murder. I did find Angelina's death rather predictable though and I dislike that they're killing of a pro-active female character when they've already dumped Kelley (Mummy Grimm), Rosalie was shunted away and Juliet is stuck in her own issues.

And the meta continues! To episode 6 and we’re still keeping on to the same plot line!