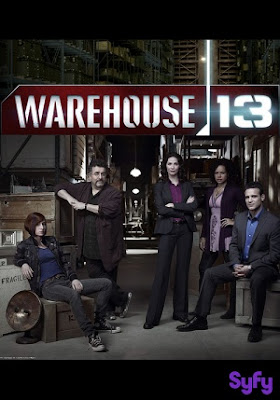 Everyone is dressed up for a tribunal – it seems Artie is being judged for what he’s done and Pete is speaking up on his behalf. Which sounds a lot more terrifying than it is, he actually does a good job. Even more so because it was unneeded, the Regents, led by Kosan, agree that Artie is not at fault for what he did under the influence of an Artefact. They see it as a terrible tragedy that frankly, happens when working with the Warehouse. Artie is stunned and the Regents give him a video signature of Leena in the hope of helping him find closure. Arte is almost angry with his guilt and screams that he killed her – Kosan asks if he really did – would Arthur Nielson have taken her life – any life – if not under the thrall of the astrolabe?

The answer is, of course, no. After all, if Artie were capable of murder, Pete would have been dead long since. And Artie’s guilt is a worse punishment than anyone else could inflict. Claudia also seems disturbed that no-one mentioned her stabbing Artie

Back at the Warehouse Artie wants to be alone and Myka wants to make him talk. Pete wants to keep moving and hope things will sort themselves out – there’s bound to be a scary Artefact distraction soon.

Time for the scary Artefact distraction! A man running screaming through the woods in a suit no less, dropping his phone before being caught and sunk into the floor by another man wielding a blue beam. Very distracting indeed.

It’s apparently Cowan National Forest, with Myka at the Warehouse and Pete on scene where they’re digging up the body; complete with recent witnesses of a blue glow and a man being sucked into the ground. Pete’s with Claudia who is not an outdoors person. And Myka won’t let him get an ATV. He talks to Range Smith and displays the maturity of a 4 year old, of course.

Claudia walking around cursing the flies steps on the mobile phone buried under the ground and recognises the sound – she’s sat on far too many lap tops not too – and digs it up, though it’s badly damaged. Pete gets the ID of the man – Linas Bently, president of Callcast Communications. There’s also an odd carving of the Earth on one of the trees; and it turns out a local Environmental group is not happy with his company.

At the Warehouse Myka and Jinks are swooping around Artie worried about him and trying to get him back to normal. He’s going through the Warehouse with Leena’s list doing all the things she did to keep all the Artefacts from acting up. Artie is extra cranky.

Back to Oregon  where they go to Green First, the environmental group to see Autumn the leader (who thinks Pete is Claudia’s dad and gets the line “aaah, that’s what it’s like to be shot.”)  When she learns they’re from the government she starts ranting about Bently intimidating them until they can wedge in the news that he’s dead. Shocked and stunned she passes them to Beccy.

Pete is surprised that Autumn went from furious with Bently to sincere grief so quickly and from his phone Claudia brings up one call away from his office – to a shop called “Fine Young Cannabis”. When they get there there’s no-one there, but there is an answer machine message – that recorded the last call Linus made, running and panicking in the woods. They see blue light under the door of the back room and go to investigate – and the glow is for the growlights for racks upon racks of cannabis. On a sheet on the floor is painted the same Earth + stick figure symbol as was carved into the tree – and under it is a body, buried in soil.

Pete is sure he recognises the symbol and tries to check the Secret Service database (not for  Claudia!) except he forgot his password – so Claudia does it (ha!) The symbol is from the group “Last People on Earth” who were ecoterrorists 10 years ago – and by terrorists they mean saboteurs who broke things.

In the Warehouse, Myka and Jinks follow Artie in their comforting stalking to a beautiful room from Warehouse 6 (when the Warehouse was in Cambodia), apparently Leena’s office where she discerned the emotion behind Artefacts to decide where to store them.

Back to Oregon where they find the old centre of the Last People In Earth burned in a fire during the FBI raid – and Ranger Smith isn’t amused by Pete’s juvenile suggestion of tear gassing a drum circle. And on one wooden beam they find a quote – from Thoreau. They make the leap that Autumn also quotes Thoreau so may be connected. And by leap, I mean plummet

Especially since they think liking Thoreau is justification to enter her home unannounced carrying guns. They interrupt Autumn’s hasty packing and find her hiding in a cupboard – and she pepper sprays Pete who nearly shoots his own face with his gun. Autumn says that Linus and Jeff (the cannabis shop guy) were all LPE together – they were friends and someone is killing them one by one. She gives them a brief history of the LPE and its members (all dead but her now). And they find a suspect, Lockheart, head of Lockheart logging who was hurt during the arson attacks on his equipment.

In the Warehouse things Go Wrong. The porthole Artie placed glows with light, causing a plant opposite it to grow, causing a ball to fall that causes a toy car to drive… and so on. I do love how quickly things can escalate in the Warehouse. In the office Artie still hasn’t watched Leena’s recorded signature statement. Myka talks about how making her statement made her realise both the risks and why it was important. Artie says she didn’t understand or agree to this and Myka argues – she did, all of them did. More musing is interrupted by the alert.

Back in Oregon, Lockheart is still most certainly not a fan of the LPE and tells Pete an anonymous tip gave up Ryan, the convicted member of the LPE. And at Autumn’s she talks about what the LPE meant to her and not worrying about the future Claudia talks about how she constantly does now she doesn’t know how to reconcile with Artie after the whole stabbing thing. Then they hear a crash and go to investigate – meaning Claudia misses Pete’s call. In the corridor there’s Ranegr Smith – Evan, Ryan’s brother (Ryan is the one member of the LPE who was convicted and died in prison) with a little lantern glowing blue. He knocks Claudia unconscious and kidnaps Autumn, saying one of the LPE betrayed his brother

Outside, Pete holds him at gunpoint – and Evan buries him. Evan escapes in the car – but Claudia manages to save him from suffocating. They rush to the ranger’s office – where he isn’t. But they do find both Ryan’s notebooks with coded names that could be deciphered, hence why Evan knew who the LPE were and a map with Lockheart’s logging base circled. Wow, why didn’t he just type out a step by step plan and leave that behind as well? And the road is taken out by the lantern – producing a chasm. Time for the ATVs

In the Warehouse Artie uses a goo-grenade (invented by Claudia, of course) to settle down the Artefacts – except Da Vinci’s gargoyle has escaped and is flying around and screeching. It’s a machine Da Vinci designed to protect treasures at the behest of the Italian government (Slap to the writers! That’s just sloppy writing to create the nation state of Italy in Da Vinic’s time.) It was stopped last time with a bolt of lightning.

Plan time! Jenks as bait (he’s not happy about that) and with a crossbow, pianowire and a lot of electricity, Myka brings down the gargoyle. But they don’t understand what they did wrong with the feng shui  spiral in shelving the porthole.

At the camp, Pete and Claudia arrive in time for Pete to have a belated vibe just as Evan collapses a cliff above the camp. At the top of the cliff, Evan rants away at Autumn while collapsing huge sections of the cliff and opening massive sink holes – until Claudia teslas him and he drops the lantern – over the cliff so it dangles from a branch, blue light still glowing.

Pete takes off his belt and plans for Claudia to lower him down using it so he can reach the lantern – she says no – she’s lighter (shockingly, Pete doesn’t argue – I like that, no “but you’re a woman oh delicate flower”). They lower her down, Pete worrying about his Prada belt, and she grabs the lantern and they bag it.

Back at the Warehouse, Artie tests the spiral for the porthole again – and 5 times they’ve tied it they get a different result (including unbearable sadness and misplaced anger. Yes it’s picking up Artie’s emotions and yes, they’re taking a hellaciously long time to figure it out). Myka finally figures it out and points out that the room is serene and the spiral worked for Leena because she was calm and centred. Artie is a little overcome by the whole thing and Myka again offers support and isn’t rejected. Artie hands the porthole to Jenks and he tests it – getting an accurate reading of “Indescribably beauty” for the portal from the first airship to ever cross the North Pole.

Back in Oregon Evan is arrested and Autumn reveals she was the one who tipped off the FBI because she thought Ryan was going to become violent against people, despite loving him. Claudia tells her she didn’t have a choice, she had to stop him, she had to save him. I call clumsy parallel!

With this clunky revelation and heavy handed message, they return to the Warehouse and Claudia hugs Artie, telling him she did what she had to. Artie thanks her. And Artie watches Leena’s affirmation about how she understands the risk and is willing to take it and why.

Leena’s office. We only get to see Leena’s office after she dies? C’mon Warehouse 13, that’s just pathetic. She was sidelined for so long and we only get to see a crumb of the awesome stuff she was apparently doing after she’s dead? And again with all the grief of her death being focused on poor Artie and him getting over it rather than genuinely missing her.

I am intrigued by them mixing the teams up a bit – on the one hand I’m unsure because I think Pete/Myka and Jinks/Claudia actually works really well, but there’s a lot of potential in moving the teams around more.

The story itself - pretty standard Artefact of the week but a little convoluted. Lockheart having a photo of Evan, Evan leaving behind the map – it’s a bit contrived.