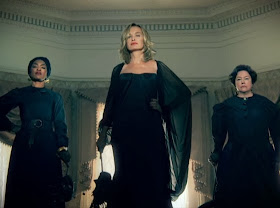 Back to the past, New Orleans in 1830 and Madame LaLaurie, yes she’s still not gone, just arrived from Paris and very not happy about it. Without her full staff she is forced to behead a chicken herself for dinner – and becomes mesmerised by the blood. Cut to another scene where one of her slaves is badly injured and, again, she gets mesmerised by his bleeding leg – and probing the wound. Then knocking him out, tying him up and beginning her torture.

To the graveyard where Fiona leads the funeral for Nan (supported by Marie), while Myrtle wishes Misty was around to bring her back (but, no, thanks to Madison). And Queenie shows up – she isn’t dead! (Nor should she be by the canon of her powers). She’s not a happy Queenie though – angrily accusing Marie of leaving her for dead (“girl I thought you were!”). Queenie has LaLaurie on a leash (ugh couldn’t she have been left for dead) who spits at Marie which is frankly just plain stupid. Queenie has put LaLaurie together again (and without any scars –unlike Kyle who is also around) – for some unknown reason. Everyone back to the Academy

At Delphi, David is still ensuring that Hank’s death is properly covered up which is very sensible but Renard is still hurt that his son will not have a funeral or any of the trappings of death. Grief aside, Renard has other issues – he needs the witches to remove their spell or the company will die. He’s willing to pay them lots of money (and then kill them later). I have to say this is going to be a hard sell.

Back to the Academy, with LaLaurie being everyone’s frequently abused servant and narrating her life story and how far she has fallen from high society to the Academy’s servant (while commenting on various inhabitants activities – Fiona going out every night, Cordelia trying to get her Sight back). Until a Black servant (appearing from nowhere to cut figs for Myrtle) cuts his hand – just as LaLaurie is wondering what “fed her soul”. He ends up tied up in the attic having his toes cut off with more exposition about her sadistic urges

Has no-one told Cordelia who LaLaurie is? (Since Queenie lead her around on a leash, I assume someone did). Did she not think that letting LaLaurie doctor a Black man was a bad idea?

Zoe casts a spell on the bathtub to find out who killed Nan – and not surprised to see Fiona, but very surprised to see Marie. And then Madison arrives, taunting Zoe for falling in love with Kyle when they agreed to share – when Zoe denies it, Madison tries to have sex with Kyle as a kind of test of Zoe’s jealousy and he pushes her away. He loves Zoe – Madison has a temper tantrum, breaking things and throwing a lamp at Zoe’s head with telekinesis which has Myrtle storming in calling Madison the worst kind of Hollywood cliché (awesome line), a bobble-head witch crotchless panties (less good, you had a perfectly wonderful insult there without slut shaming). Myrtle is shocked that Madison speaks back to her (you’re going to insult people, expect to take what you dish) and announces that she will be the next supreme – crotchless panties for everyone

Even though Madison is deeply unpleasant on many levels, that was an epic come back.

Fiona’s still with the Axeman and he has a retirement plan for them – a nice little farm his granddad owned where they can live the rest of their lives after murdering the new Supreme to save Fiona. Aww bless.

In Madame LaLaurie’s torture attic, she kills the man – and Spalding appears. Or the ghost of Spalding? Who knows, no-one ever stays dead on this show. He appreciates her “art.” He commiserates with her how awful it is that poor LaLaurie has to wait on that “black devil” (Marie). And why is Spalding willing to help? Because Fiona is “confused” in embracing her sworn enemy, Marie Laveau. And he knows of magic that will kill her – but first Lalaurie needs to get something for him.

Cordelia tries to make up with Queenie – who explains how she survived with her new powers (super healing it seems) but still isn’t ready to accept Cordelia et al as a friend and tells Cordelia how weak she is and unfit to run the school. Maybe displaced anger over Cordelia’s husband but Cordelia has never been effective.

Cordelia mixes another potion and sobs… she puts the mixture around her eyes – and then stabs her eyes out. Uckies uckies uckies.

Fiona rushes to her room to be intercepted by Myrtle who has cared for Cordelia. Myrtle describes Cordelia as a hero ripping out her own eyes to protect the coven and gain the sight again; Fiona thinks they’ve already taken care of all the threats but Myrtle, astutely, talks about threats within and those who harbour bad thoughts. Fiona protests she has no secrets and Myrtle’s reply is pretty awesome “I deserve better lies than that.” Fiona decides not to go in and see Cordelia…

LaLaurie has got Spalding what he wanted – an antique doll. In a moment of glaring lack of self-awareness, she describes Spalding’s fascination with the doll “unsavoury.” And he gives her the potion to render Leveau mortal… Benadryl. Allergy capsules. And she must never speak the name aloud.

And Myrtle gives Zoe some jewellery (not to wear “you could never pull it off, darling”) but to hock in case of emergency. She wants her to leave with Kyle – and slaps Zoe when she says Kyle loves her because he’s damaged goods (“how dare you be so unromantic!”) and gives Zoe tickets: if Madison doesn’t kill her, Fiona will.

I kind of love Myrtle – she’s so incredibly dramatic.

In a hired, neutral board room, Fiona and Marie meet with the board of Delphi security and many many guards. They pointedly don’t have guards or check Delphi for weapons – Fiona’s too powerful and Marie is immortal (nice power play). Negotiations begin (opening shot from Marie, telling the “white devil” that they’re doing Delphi a favour even being there) in which he tries to appeal on behalf of the people of his company losing their jobs (Marie’s not impressed since the people in her shop were murdered). He offers a truce, Marie wants a private jet and Fiona wants his house (repainted). Or they can all just die – and the waiter, the Axeman, turns round with an axe and begins hacking, Fiona using telekinesis to remove any guns from the equation.

Oh please, like Fiona and Marie needed the Axeman to do their killing for them. At least Renard has the good class to go out with some epic level style. Fiona does the honours.

Back at the Academy, Fiona and Marie drink to a long friendship before she goes out to see the Axeman. Leaving Marie alone with LaLaurie – who puts Benadryl in Marie’s drink then stabs her. Marie is not impressed by Lalaurie’s attempt to kill her with antihistamines. She chases LaLaurie… and then Spalding hits her on the head with a doll, knocking her down the stairs

Spalding appears to say, no, she’s not dead – she can’t die. But she is unconscious. He advises LaLaurie to bury her.

Zoe and Kyle are packing to leave – but Kyle is afraid of hurting people since he still has dark, evil thoughts. She talks him round and they run onto the bus

Do we really need to try and create a backstory for how Madame LaLaurie became the disgusting sadist she was? Especially since this was a real person they’re creating this fictionalised origin story for. Do we need to have her narrative on how far she has fallen? This is kind of implied. Do we need to have her playing narrator? Do we need any more of this character?

The killing of Delphi’s board was pretty epic though. I wish the whole season could have a do-over with Marie and Fiona working together from the start.

I would have loved LaLaurie failing to poison Marie with antihistamines if she wasn’t brought down by the plan anyway. I don’t want or need LaLaurie to get her revenge in another episode that was heavily about her.