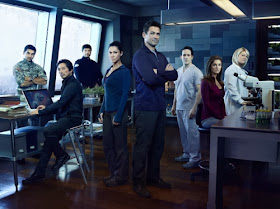 And mysterious helicopters have landed – apparently ominously as Sarah and Alan agree while hurriedly playing the “let us never speak of this again” game about having sex. The ominous is rather confirmed by the squad of goons with guns who move in who Hiroshi calls his “corporate patrons”. It’s also so ominous that when Constance Stutton, chief operating officer (whatever that means) of Ilaria corporation introduces herself it’s all rather wonderfully anti-climactic.  She’s here just to help Alan!

Yeah right. And I have a bridge to sell you (also she’s not met Alan yet and doesn’t realise what an arsehole he is).

First thing Alan asks for is communication with the CDC. She points out that she neither has a satellite uplink in her pocket nor a magic wand – and like his helicopter in the pilot, hers left straight away but will be back in 2 days. Constance uses masses of honey to contrast with Hiroshi’s vinegar – and lots of really stupid corporate speech. And of course he can have Julia back and her deepest possibly sympathies for her being infected.

Of course, alone with Hiroshi, she shows a different side. She throws a book at him then grabs him by the throat – they needed 2 things from him: the virus and the cure. One without the other isn’t very good. They want to “think the herd” not make it extinct – and rule the herd apparently. She actually views the CDC as a good thing since they can find the cure. Of course, once the cure is found everyone dies – the CDC, Hiroshi’s employees (which he disapproves of them being his responsibility), everyone.

She’s also curious about the goo-zombies which were apparently not part of the plan and part of Hiroshi’s attempt to find a strain of the virus that could be cured.

Sarah and Alan also talk both agreeing that Constance is not to be trusted that, as a big corporation, her allegiance is to her bottom line not the people and, really, why send out the expensive private army when the CDC was already fixing things for them? So the plan is to find the cure – but not hand it open.

Constance continues the theme of no-one trusting anyone and goes to ask Daniel about Julia because she doesn’t trust Hiroshi to tell her everything or, well, anything. Of course, Daniel is unfailingly loyal to Hiroshi. He goes to report that to Hiroshi (who is busy looking through his Julia stalking book) who in turn warns Daniel how dangerous Constance is. Daniel asks for his father’s trust and Hiroshi brushes it off and adds a command – don’t let Constance reach Julia. Daniel wants to know what’s so special about Julia and Hiroshi brushes him off; Daniel should want to help because Hiroshi asks though he admits he thinks Constance will kill Julia. He also reveals that he doesn’t really care about the cure.

Just in case things aren’t freaky enough, we then cut to Constance using a metal grinder on her teeth.

She and Alan have their first mini-clash – Alan insists on coming to collect Julia or no-one will collect her! Quite how he intends to enforce this ultimatum I do not know, but he’s Alan, that’s never stopped him before

Downstairs, Julia is really happy with her miracle cure – except it also comes with flashing, silver eyes and stabbing, horrendous headaches. She solves this by bandaging up her eyes – apparently some kind of light aversion. And she’s still hallucinating Peter which makes me doubt the whole cured thing, but she does need to get back upstairs because her sorta-cure may have left the necessary antibodies in her blood. Also, even her hallucination flirts with her.

Which is the least of her problems when she’s forced to hide from the goo-zombie that breaks through the door. It finds her – menaces her, launches itself at her – and her silver eyes flash. The goo-zombie turns and runs in terror.

Anana and Sergio are still playing together – going on a little snow mobile trip. They arrive at a camp and he continues to ask to have his hands untied – so she hogties him. I like the way she thinks. They banter away and she pokes him for not even speaking Spanish properly (it’s Portuguese – he’s Brazilian). They talk about their home – she talks about the missing kids and he suggests that his own home had a lot of missing children.

They arrive at their destination – the outside doors of the lab, seen by Daniel on the camera when Sergio shows off his stab wound for him. Tense confrontation in the corridors – and Anana realises that Daniel is her long lost brother, Miksa. Sergio tries to attack Daniel –which doesn’t work given the guards, and then Anana hugs him, much to his bemusement. She tries to explain and he obviously doesn’t believe – until she shows him a photograph of Toluk, his twin brother; of course he’s heard of photoshop and isn’t impressed

Hiroshi and Constance have another confrontation – Constance has found Hiroshi’s Julia stalker file. Hiroshi dismisses it as a file for recruitment – and he hasn’t recruited her because she’s so very unimportant. Constance clearly doesn’t believe him and gets her location from him – she will decide how important Julia is. She also reminds Hiroshi which side he’s on – and shows off silver eyes. When she leaves him, Hiroshi enters his secret passageways

Alan prepares to head off with Constance and her team – Constance insisting he carry a gun – when he sees Sergio and launches himself at him, only to be separated by the guards who seem to have to do a lot of this. Constance promises to deal with Sergio for the death of Doreen – but Alan has to focus on the cure. Left alone with Sergio, Constance promptly smacks him for killing 25% of the people they needed to find a cure. More exposition – Ilaria is paying for the virus and cure, Constance is paying Sergio for proof that Hiroshi has gone rogue. He protests that she was the one who messed up with Hiroshi and she hits him again. Then she straddles him and kisses him.

Despite that affection she needs Alan as an ally – which means Sergio remains a prisoner. Also she thinks Daniel is more than capable of killing him. Off to the cells, Sergio

Hiroshi makes his way to Julia who is all panicked and confused by the goo-zombie; but she’s made a full recovery! Except for blurry headaches and silver eyes, which Hiroshi actually seems kind of shocked by. And by kind of, I mean he nearly has a stroke. He bandages her eyes for her – but while he does so he starts crying.

He warns Julia they have to leave because there’s a woman coming to kill her –she protests that Alan would never allow that, but Hiroshi knows Constance better.

Alan, Constance and some red shirts make their way through the quarantined corridors which are now in ruins – and they’re attacked on all sides by goo-zombies. Alas poor red shirts, I knew you not at all (Constance is kind of awesome though). Constance leads them on the retreat, red shirts dropping all around (she ruthlessly orders them left behind) until they manage to get behind a metal gate. Alas, Alan survives. And he insists that they cannot leave without Julia – Constance points out she’s probably a goo-zombie herself and exactly how is Alan going to help by also becoming infected? He insists on staying and committing suicide so Constance pulls a gun on him and orders him to the lift, despite him saving her life; yes she’s “extremely appreciative” but she has an investment to protect. He tries to call her bluff, she threatens to kill Sarah as well.

Daniel, meanwhile, has a private meeting with Anana and her photo album. She talks to him about all the children being taken and it turns out there have always been children at the base – but they all disappeared and Daniel didn’t know what happened to them

Hiroshi leads Julia to his office – and finds Daniel and Anana waiting for him; it seems Daniel believes Anana. He has his men take Julia away and Hiroshi manages to pass a box to her before she goes. In the lab she opens it and finds contacts inside, tinted contacts made to imitate her natural iris (like Hiroshi wears).

She doesn’t put them in – and Alan arrives. They hug and he gasps at her cure and her presence and she carefully keeps her eyes down. All watched by a very mopey Sarah. He does notice her lowering her eyes and asks her to look at him- and sees the silver irises.

In another part of the base, goo-zombies break through the ceiling.

My, Constance is direct. I quite like her, despite the random violence she dishes out for funsies. She’s directed and focused and professional in a brutally cruel way – no doubt effective and better at putting on a façade and than Hiroshi. She’s a believable villain based on actual villainhood rather than sinister stereotypes.

And exposition! Things are becoming clearer – not clear, but they shouldn’t be clear yet. But we can see what sides everyone is on, where the lines are drawn and a shape of what’s to come – and the silver-eyed thing brings in an element beyond Umbrella (Ilaria) experimenting with shit they shouldn’t.

Stuff is HAPPENING. It took you 7 episodes but I’m actually beginning to care, Helix. Now, if you can just avoid Alan and Sara, the two most pointless, dullest characters on the show, this could get good.