Urban Fantasy: Good Girls, Bad Girls and Problems with Both 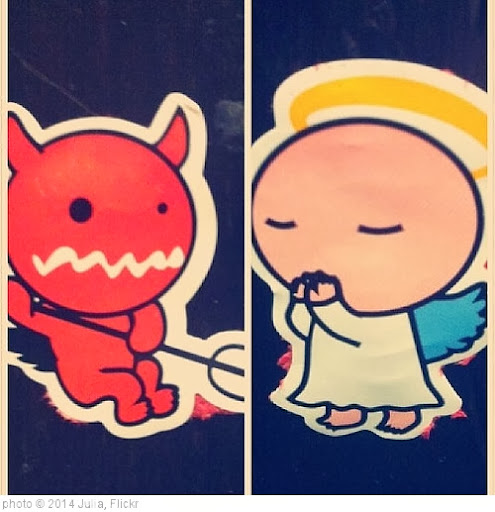 With the increasing popularity of urban fantasy, the genre has reached the point that there are now not only several recurring tropes but characters written to fit specific models which infer how the reader is to interpret them. Because this is a genre filled with largely female characters these defining characteristics come to take on specific meaning. These narrow understandings of gender tend to be restrictive even though they are cast as forward thinking and reinforce both a binary understanding of gender and upholding some time old stereotypes even as the archetype claims to be flaunting gender norms.

The idea of female purity or innocence as a desired trait in women is certainly not new. What I don’t understand is what it is doing in a genre where women are continually fighting, maiming and outright slaughtering all manner of supernatural creatures. There is also often a pairing of purity with outright ignorance of the world they inhabit and usually this ignorance stems from a desire to protect the female protagonist or act as outright abdication of responsibility on the part of her parents. In many ways it reminds of the excuses employed to deny education for women. If women are not expected to go out and kick  asses and take names, why would they need any real information on how the world really works?

In the Lila series by Sarah Alderson we get a young female protagonist who though young, is shielded from the reality of the world by her brother and the man she loves. Of course he pulls back from sex she initiates because, being older and wiser, he is more fit to decide when she can lose her virginity. It’s fine for her to be on the run for her life, but sex is most certainly  a no no, no matter that she has talents which make her extremely powerful. In Daniel l. Jensen’s Malediction series, Cécile is originally prized for her red hair and, of course, her virginity. She is yet another female character who ends up having to justify her decision to engage in sex. This is compounded by the fact that Cécile doesn’t defend her decision by saying that sex is what she desires because well, she wants some, but because she is now married to Tristan. Intercourse can now take place and not tarnish her sweet pureness because the marriage vows have been said; how pedestrian and reductive. Then we have the ever popular Bella from Twilight who must retain her virginity until marriage because according to her eternal love (yes I am rolling my eyes) this is the only way she can avoid burning in hell.

It’s not just through sex (or lack thereof) that this sense of “purity” is reached for; many protagonists are outright reduced to children to achieve that naive innocence which seems to be the benchmark for female goodness. Of course, these same traits in a man would be markers of weakness or someone we’re supposed to regard as pathetic or incapable; it’s notable that the benchmark or epitome of female goodness are all markers of male weakness.

In Lindsey Progues After The Ending Series, all other women are sluts and bitches. Though Zoe and Dani are both 26 years old they read like 13 year old girls on a perpetual hormonal fit. It’s purposeful infantantisation which suggests that to be good, i.e. pure women cannot act like women but have to be children. They are separated from the other women simply because they have determined that they are the “good girls”.  Hereafter by Terri Bruce is yet another example of infantalisation being employed. In this case, you have Irene, who is cruel and uses the people around her. Irene even dies while drinking and driving but since she has the emotional maturity of a 12, year old, though she is 36, she cannot be all bad right?

Karen Marie Moning’s Mackayla Lane’s series gives us an absolutely vapid protagonist who I am surprised can walk and chew gum. Mackayla is so sweet and innocent she will not swear because that is just how a good lady behaves (as she lectures another character pointedly - never mind that they’re fighting for their lives against evil fae - that’s no excuse for cussing young lady!). She desperately wants to wear bright colours with pink being her most common choice.  All good girls,sweet girls, do after all love pink. Are your eyes rolling yet?  So remember ladies, swearing is bad okay? The infamous Sookie Stackhouse is another woman driven by purity and ridiculous gender roles. The world may be falling down around her and vampires fighting in the kitchen but being the perfect hostess she knows just what to serve in such an occasion.  Performing a gentile version of femininity and a feeling of superiority where any other woman is concerned makes Sookie the precious innocent we have all come to be annoyed by.


After reading these gentle ingenues, convincing us of their goodness with their utter ignorance and refusal to swear, the opposite - the Raging Tough Girl - should seem refreshing.
The Raging Tough Girl is overwhelmingly common in Urban Fantasy, in many ways a fight against the delicate ingenues.There is an old-as-the-hills trope of women being so sweet and good - not raising their voices (except to scream helplessly), to be kind and forgiving and nice - to murmur endearments rather than harsh curses, to be rescued rather than fight, to be loving and gentle rather than harsh or angry. Like the habit of reducing “strong” female characters to weapons, there’s an urge to fight against the idea that women should be passive, innocent, helpless, saintly and pure; it’s a push against the narrow ideas of what a woman should be, what a woman should aim to be.

So in comes the Raging Tough Girl. She’s tough. She’s angry. She doesn’t take shit from anyone - and fuck it, she will use words like “shit” and “fuck” too! And if you don’t like it she’ll punch you in the face! She’s the very opposite of the delicate, fainting damsels who can’t even bring themselves to curse!

But there is a glaring problem. The Raging Tough Girl has severe anger management problems. They’re inevitably incapable of diplomacy because they’re absolutely incapable of controlling their harsh tongues. These women, if they were ever given an audience with the queen, would promptly cuss her out before headbutting Prince Phillip. They often have companions who beg them not to talk simply because they cannot be trusted not to screw everything up. Poor Jean-Claude lives in fear of Anita Blake opening her mouth in delicate negotiations, the Shadow Chaser’s Kira can’t hear of authority without bristling and rebelling almost by reflex and Ilona Andrew’s Kate Daniels could barely restrain herself from lashing out in early books, though thankfully both of these mellowed as their series progressed. In Rumours of War, Perish needs someone to speak for her in negotiation because she can’t be trusted to guard her tongue and Xandra in the Immortal Empire Series can’t sit through a 5 minute conversation with Victoria without turning to venom. Worst of all are The Hoodoo Series with Keille, E.S. Moore’s Kat Richardson series and Tatiana from The House of Comarré Series with all of these women virtually seething with constant rage.

It isn’t empowering to be so full of simmering anger that you have to be managed like a small child. It isn’t empowering to fly off the handle at the slightest provocation, to have epic even violent temper tantrums at the slightest thing. Far from being empowering, this feeds into the trope of women being irrational and emotional - in women being unable to make sensible decisions and even that women’s emotions are not to be taken seriously. After all, how can you take someone’s pain or anger seriously when they have dramatic mood explosions over nothing? In some ways it is a form of Spunky Agency - because, again, the reader is encouraged to participate in stifling the character’s agency because we want her to be silent, we want her to shut up, we want her to sit down and let someone else take over where her angry, violent outbursts won’t get them all in trouble.

In extreme cases these women are outright lethal, violent and probably need locking up. At least in some cases, like Kat from the Kat Richardson Series she eventually recognises that the fact everyone cowers around her, even her loved ones and allies, is actually a problem. But all too often this lethal, uncontrollable rage is seen as strength, as powerful.

Even on a less-than-lethal scale, their angry violence is rarely treated as it deserves. Keille from the Hoodoo series regularly punches people. People in authority, friends it doesn’t matter - if she’s angry she’ll outright assault people without any restraint. She was so bad we named a trope after her in the lexicon - but she’s hardly the only one of these women to resort to violence or the threat of it at the drop of a hat.

This isn’t empowering - no more than the Woman-as-Weapon is. In fact, it plays on our societal impression of women as weak: because only in a society where women are considered weak, helpless and incapable of causing harm would this random, uncontrolled violence be considered empowering. Her violence can only be presented so casually - and so without consequence - because she is considered weak; because it rests on the societal assumption that violence from women cannot be a problem or a threat. These women can be out of control raging brutes simply because the reader is expected not to consider violence from a woman to be a dangerous or serious matter.
How is it empowering to rely on the stereotype of female weakness to present your character’s strength?

These problematic archetypes show that fighting against problematic portrayals require greater nuance and subtlety than merely writing the opposite of a tired trope and ultimately remind us that the true “strong” female characters are those that are beyond a mere archetype.

We started this piece taking two archetypes at opposite ends of the scale of female representation - and showing that they were both flawed. But even at these extreme arcs, we found that both character types had a thread of commonality - they are very often Exceptional Women. Whether raging and violent or pure and proper - they’re repeatedly (though certainly not always) either surrounded by men or repeatedly presented as BETTER than any other woman around them. Either tougher, stronger and definitely angrier - or nicer, more refined and definitely purer. Even at these extremes of the spectrum, a woman can still only be uplifted if she can raise herself above womankind.