Rumors of Wars by R.L. Craven 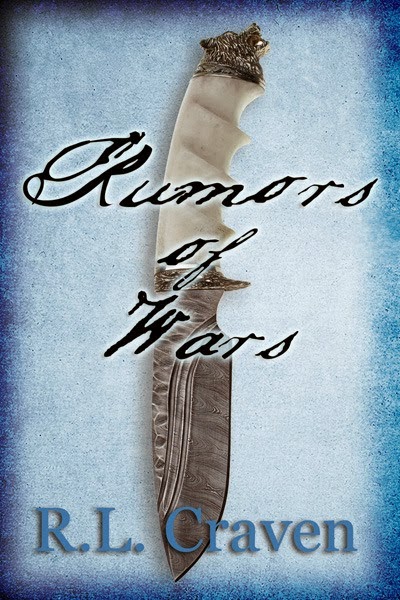 In a harsh, dystopian world after the economic collapse of the US, Perish is a bounty hunter and a tough woman with many talents. Including one very rare and very valuable talent that she may have to a level unseen anywhere else.
That makes her valuable. It particularly makes her valuable to the wizard Gregor, head of the Confederacy of Talents. His organisation does not accept no for an answer; but Perish, and her long standing friend Pride, brother of the werewolf pack leader, are sorely tempted. Especially since it’s apparently the Confederacy is not united behind Gregor…
But Gregor also has a carrot to offer – knowledge of her own heritage that has been long denied her and she is desperate to learn. But is it worth the risk of using powers she barely understands?
Let’s begin with the world – I think with a new series, especially for a book that isn’t just an urban fantasy but a dystopian as well, you really need a solid world as a good foundation. This definitely has that – society is collapsed, it’s clear, but it’s also quite original in how it’s collapsed; there was no grand cataclysm or disaster, just decades of economic selfishness and incompetence on the part of the powers that be. As such, the economy collapsed, many parts of the city are abandoned by anything approaching civil authority or organisation, everything is decaying or ugly and corruption is rife. In many ways it is bleaker than most dystopians precisely because it didn’t take a plague or a bomb or some zombies to make it happen – just the kind of political awfulness we’re all so desperately familiar with.
The dystopia is also well maintained throughout with constant references, especially to class. With economic collapse, the poorest are the most vulnerable and it is something that often needs addressing in any decent dystopia. From little references like the begging children through to parts of the city giving up on money altogether and adopting a barter system, the dystopia is always carefully present without overwhelming the plot.
My main complaint about the book is it’s sparse. The world is deep and rich and shown to great effect – but I need more. What are talents? Why? How does the Confederacy of Talents operate? What are all these creatures that are mentioned? The author has done an excellent job of not bogging down the book with excess description but has also left me a little frustrated by the lack of flesh – it’s not that the story lacks depth, I can feel the depth there – I just want to look into some of that depth a little more.
The same applies to the characterisation. I know Pride and Perish have history and it’s alluded to very artfully – but not much more than that. The same goes for Perish and the greater werewolf pack. Or Perish and Princess. Even Perish herself – in many ways she’s a very standard Urban fantasy kick-ass protagonist: she has special woo-woo that makes her desirable. She’s lethal and independent, she doesn’t like to let people, even people she cares about, close to her. She has trouble controlling her temper and is extremely undiplomatic, requiring Pride to negotiate for her because she’s bound to annoy the wrong people: classic Keillie Independence. That includes the bad – Perish is surly for the sake of being surly and at times it comes off as petulant. I need more of her history – with the priest that is partially mentioned, with the other characters and she herself to show me some of the depth that’s hinted at and make her more than the kick-ass, in-everyone’s-face Urban Fantasy protagonist I’ve seen so often. I generally like her when she appears – but I’d like some more identifiers to stop her being generic.
She does have some good friends and some good female friends which is an excellent subversion for this kind of character. And, more, Princess exists to be more than just Perish’s “Good Friend Albert”; she has her own agenda, her own life and her own goal providing medical services to the poor and the vulnerable – including abortions for women in a virulently anti-choice society. This, combined with the excellent female friend is a good start and I also love that we have a succubus who completely breaks the mould – but the world is set up to be male dominated as well (or to make Perish even more special) by making Talents something that is much more common in men than women. I’ll never understand these worlds that feel the need to restrict woo-woo to men to make the few women with woo-woo more special.
In terms of inclusion – Perish is a WOC, but exactly what she doesn’t know; it’s part of what drives her to discover who her parents where so she can learn who she is. This also relates to the population as a whole – into the future more and more interracial relationships have happened leading to a larger number of POC and a large number of mixed-race people which also leaves its mark in society: such as companies using models that are mixed race to appeal to a larger demographic. Pride is also a POC, Samoan and Brazilian. Alas, GBLT people are completely erased.
The story is good – but distracted by writing that is a little long winded and some side-storylines – like posturing to Gregor and Ahriman’s little wild goose chase. The side stories aren’t bad by any stretch, but the fact the main storyline barely even starts makes them a little frustrating.
I think, overall, my wish for more world building stems from the story ending in a cliffhanger – and rendering much of the book a prologue. It’s an intriguing prologue. It’s an interesting prologue. It’s a prologue with some interesting characters, a fascinating world, some major issues to arise and a high potential for a fascinating story – but it’s still a prologue. The story is all introduction with no resolution.