Da Vinci's Demons, Season 2, Episode 5: The Sun and the Moon 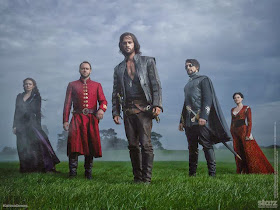 Leo and co arrive at land – to find that Riario et al have already arrive. Albeit not so safely, their ship is in tatters with wreckage scattered up the beach; the sailors don’t expect survivors. Since we had a prequel of him back in the first episode, I’m pretty sure they’re wrong.

Leo is concerned with the pretty light. Zoroaster wonders about food because he’s the practical one. They leave Amerigo behind with the soldiers, because they can’t have bit parts hogging the glory unless they need some red shirts.

Off they go with some of those red shirts, with Zoroaster pretty miserable with all the wildlife and Leo enthralled by pretty colours. They also find a symbol in pure gold – a symbol that looks just like the one on Leo’s key (which he stole from Riario). Red Shirts want to steal the gold as well since they haven’t been paid beyond promises of loot and this counts as loot. Leo talks them out of it just as an Incan warrior appears. Leo decides to speak slowly to him in English Italian (or possibly Tuscan – Florentino which is very similar to Italian but not the same). His Red Shirts lose their nerve and draw weapons – the Inca runs off. Leo growls an angry lesson about diplomacy to his Red Shirts.

They keep moving, finding a bridge (which excites Leo since it’s civilisation) And they hear a random scream just to be ominous. Start worrying Red Shirts. They are ambushed by several Incas with the mark from Leo’s key on their bodies. One of them knocks Leo unconscious.

As they’re captured and moved, Zoroaster panics while Leonardo recognises the Incans are a civilisation and tries to use Genius Powers to decipher their language

Zoroaster realises he can escape his bonds – Leo tries to stop him, but Zoroaster isn’t a big fan of following Leo’s orders considering that doing that has ended up with them being captured. So he escapes, he attacks – even throws a guard down a cliff. To try and help Zoroaster, Leonardo helps in the escape attempt but they both end up beaten down – and saved from death by the arrival of an Incan woman (wearing a leather and gold bikini). Zoroaster, of course, responds as you’d expect.

They are brought before another woman who recognises Leonardo’s key and takes it off him.

That night they’re brought out before a huge crowd and the directions of a man wearing more gold. The woman who took the key and the key itself are also involved. Watching Leo figures out that she’s not pleased with the party (the guy has totally upstaged her jewellery, it has to be said)

3 objects are placed on an altar – a goblet full of liquid, a bowl of corn and a stick of some kind. Apparently you need to pick one to identify your place/purpose (this is guessed by the other Red Shirt who apparently has an Incan guide book). He chooses the stick, a weapon, assuming it to mean he gets to be a warrior. He’s messily killed

Hey, there’s 3 options and 4 of them. Once the two Red Shirts are gone won’t that only leave the right choice?

Red Shirt 2 picks the chalice and drinks from it because it’s similar to Mass. WRONG ANSWER! He gets stabbed by the gold covered guy, who takes off his golden mask to do it. Leo reads the soulful expression on the woman and decides she wants them to succeed while the golden guy wants them all dead. Which doesn’t exactly take a genius.

Leo has a genius moment and realises the corn are seeds for plants, the stick is a tool for hoeing and the water to help them grow. He stands and speaks a few words he’s learned which allows him to swap places with Zoroaster (at the woman’s insistence). Leo plants the seeds and says another word he’s learned (that means” life”) – one that is repeated and chanted by the crowd. The woman then says Leonardo’s name in his ear – she knows of him.

They’re taken into a prison – where Nico is already. Great reunion! And Riario – less than wondrous reunion. Zoroaster attacks him, briefly stopped by Zita (she survived too) but Riario just stands there for Zoroaster to smack him around a bit. It seems Nico has also switched sides, he’s now a devout Catholic and believes in divine intervention that has saved them. Apparently them surviving the ship wreck was divine intervention and now they should all work together.

Uh-huh, not buying it. Nico’s up to something.

And Leo agrees – not about the divine intervention, but about working together anyway. He wants them both to get the Book of Leaves – and in walks the golden woman, speaking English/Italian/Tuscan which is a little surprising, and she thinks the Book of Leaves is awesome as well. She’s High Priestess Ima Cama and she will answer any of Leonardo’s questions. Just Leonardo’s questions.

She takes him to a cave covered in paintings and tells him of other people who crossed the ocean – the Abyssinian (who had the map guide tattooed on his skin) and Leonardo’s mother, who helped Ima. She has the book of Leaves – Leo gasps in joy that the book is real (and that his mother is about)

Back in Florence, Vanessa is bored, Verrochio shows her some secrets of the palace and we get the implication that he’s in a sexual relationship with his new young apprentice, Bendetto. On to more relevant scenes, Clarice Orsini talks to the Medici bank who are not letting her draw out more money. They have reasons but the fact she’s a woman seems likely to be the real reason and they also bring up that Lorenzo’s first love, the Duchess of Calabria, Hipolita Sforza is also in Naples. Because he’s really travelled across Italy, risked life and limb and abandoned his city to go see an old flame? Clarice makes some threats which she really can’t back up and they know it

Later, Carlo di Medici (Lorenzo’s half brother) pays a visit to Clarice’s bedchamber which is quite quite scandalous. But he wants to help her with the bankers because, as an illegitimate child with an “unsuitable complexion” he was also considered weak and inappropriate for office just as she is for being a woman. She realises he wants a seat on the bank’s board – and there’s a seat vacant after Guiliano’s death. They forge an alliance, though he continually flirts with her and she has to keep stopping him (damn Gratuitous Heterosexuality).

Except he goes through secret passages to meet up the bankers (damn, am I going to have to remember their names now?) who seems to be working with. They’re plotting to remove Clarice and replace her with Carlo – the hammer they have for the threat is a suggestion to King Ferdinand of Spain that he default on all debts if Clarice isn’t removed. Carlo pockets the documents. As the bankers leave they plot, conveniently overheard by Vanessa using the echo-chamber Verrochio showed her earlier (aha, a point to the scene) they conveniently whisper how they need Carlo’s support to sway the board.

Vanessa and Verrochio take the knowledge to Clarice who is not happy, especially since Carlo fooled her. But Vanessa thinks Carlo may be loyal, the servants speak to her and Carlo was apparently always loyal, always a Medici – and the one who Cosimo actually confided in.

To the bank and Carlo is appointed to the board – and the Bad Bankers go ahead with their plan and present King Ferdinand’s intention to default on the loans he owes. A vote is called to remove Clarice – and Carlo supports her. And produces the letter proving the backroom dealing between Ferdinand and the naughty banker. Clarice declares it both malfeasance and treason. She also suggests that everyone who voted against her is very naughty indeed and asks Carlo what to do about it – he thinks a smaller board may be in order. She leaves him to it.

And later they meet again and have sex, of course they do (hello there Gratuitous Heterosexuality). Seen by Vanessa – and Cosimo notices her watching.

In Naples, Piero and Lorenzo have been thrown in prison and Lorenzo is most displeased that he hasn’t been given a fair hearing; they were found with 2 dead bodies and a chest of gold after all. But he did manage to sneak in a bribe – since they were strip searched we don’t want to know where Lorenzo was hiding it. The guard takes out a coded message and Hipolita arrives with lots of flirting and some gentle unhappiness about Clarice – Lorenzo refuses to bad mouth Clarice and points out it’s her family that is sending arms against Florence.

Her husband? That would be Alfonzo – son of king Ferrante who has had some bad experiences with Leo. He arrives now to throw around some homophobic gibes about Florence (because this show really needs more homophobia). They get to have a fun meal together in which Alfonzo is unpleasant and Lorenzo and Piero are strugglingly polite (Alfonzo recognises Piero as Leo’s father by the surname “Da Vinci” despite it not being a surname and Alfonzo having, literally, just assumed everyone from Vinci is actually related to each other). Lorenzo is quick to speak in Leonardo’s defence, unlike Piero who instead would much rather all the taunting could be moved past so they could get to the actual matters of state with King Ferrante

And then he faints into his dinner. Alfonzo has drugged them both.

Lorenzo wakes up in a dungeon with Ferrante who is merrily slicing up a corpse, apparently to preserve it. Everyone needs their hobbies. There’s someone screaming in the background, I suppose it’s someone being tortured but every dungeon seems to have random background screaming. I’m waiting for the camera to scroll back on one of these shows to reveal the 2 peasants the noble has hired to sit on a corner and moan now and then to create proper ambience. Anyway, his random cadaver meddling is a metaphor for Italy and Florence being all problematic. He has a whole museum full of preserved corpses. To not add to the collection, Lorenzo has to pass Ferrante’s tests whatever they are.

Unlike Clarice, Lorenzo can’t have sex with the one he’s been flirting with but she does enthusiastically kiss his hand through the bars of his cell.

Is Verriochio and a random apprentice supposed to be Da Vinci’s demons gesture of inclusion? Because, give the controversy over this homophobic show, that’s kind of sad.

I’m waiting for Clarice to do something with her being left in charge. This entire episode she just basically sat back and hoped a plot against her would fizzle and die – which it did thanks to Carlo’s intervention and nothing from her. Even her initial demand – funds to increase the guards – were made with threats which the bankers responded to with “no you won’t” to which she had to sit down and accept that, no, she wouldn’t.

Carlo is impressive though – crafty one. But I wonder what his end game is?