Da Vinci's Demons and the Horror of "Gratuitous" Bisexuality 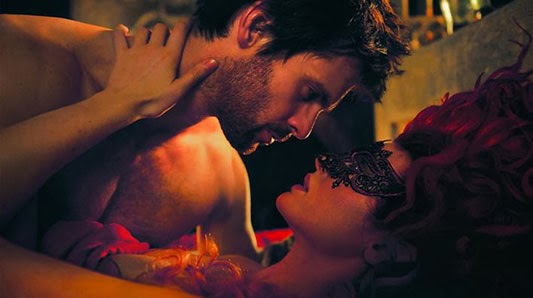 Da Vinci’s Demons is due to return for season 2 in April and in preparation for that, David S Goyer is doubling down on the homophobia that so made this show a hot mess. We’ve already spoken about the gross homophobia of the straight washing on this show - well season 2 isn’t going to be any better with Goyer stepping back from even the highly dubious minor suggestion of Leonardo’s bisexuality because it would be “gratuitous”.

“Gratuitous” - now that’s a loaded word right there and it has several unpleasant connotations in this context.

First of all it suggests that having a bisexual protagonist is unnecessary for the story, therefore shouldn’t be there and is excessive/done for nefarious purpose

This is a text book example of assuming a straight default for characters. We’ve touched on this before, but there is an assumption that any character must be cis, straight, able bodied, white and male UNLESS there is a reason not to do so. In other words, unless your storyline expressly REQUIRES a character to be GBLT, they will be cis and straight - because that is considered the “default” state of being, your basic template for humanity and anything not fitting it is a deviate - the Other.

Marginalised people are too often defined as nothing more than avatars of their minority. A story about a gay or bisexual protagonist simply must, by this logic, be about sexuality. It cannot be a story that just happens to have a gay or bisexual protagonist, it cannot be a story about any topic unrelated to their sexuality because if it were the author would have used a straight person - the default, the “real” people, the “normal” people.

That’s not to say that there isn’t a problem with TV shows and books including marginalised characters for the inclusion cookies, the street cred - because that’s what gives rise to Tokenism. But even this Tokenism is itself a product of the cis, straight, white, able bodied male default. Because that privileged lens is considered the default, he needs an actual character - a plot, history, motivations, personality etc - to make him notable and not a blank sheet. Minorities do not need an actual character because they come with a template already prepared: they don’t need to be complex or have different motivations or background to define them - they’re already defined as The Gay. The Black. The Female.

But that is a matter of implementation, lazy writing and, frankly, blatant disrespect for the minority in question - not a criticism of the inclusion at all. Besides, turning your protagonist into a Token is pretty damn difficult.

There is another element of the word “gratuitous” in the way it is often used when criticising media - it usually refers to sex or violence. Gratuitous sex, gratuitous nudity, gratuitous gore - excessive obscenity used to titillate rather than being justified by the story. By using this word to refer to Leonardo’s already abysmally represented bisexuality we have a further continuation of the idea that non-straight sexuality is obscene. Even the most sanitised of love between 2 men or 2 women is seen as obscene, as sexualised and as unfit for television. This is the reason why the rather innocuous comedy GBF has just earned an R rating despite having no sex, nudity or even nasty cussing. This is the reason we have people scream “think of the children” when GBLT people kiss or hold hands.

I am actually astonished that the creators of Da Vinci’s Demons would be concerned about airing anything gratuitous given the high level of nudity and sex displayed from week to week. The first episode displayed a topless woman for no discernable reason and the season went on to have Lucrezia naked more often than clothed. Clearly they are not worried about being gratuitous when it comes to sexualising the female form. There has even been full frontal male nudity, something rarely seen in movies, let alone television, yet they are supposedly concerned about being gratuitous. This is not about fear of offending some prude’s sensitive fee fees but enforcing a form of compulsory heterosexuality. As long as a scene involves straight people, be they nude or shitting in the corner of a sauna, the content passes the litmus test of acceptability.  This of course begs the question of what would change if these same actions were done by someone who is GLBT?

This, unfortunately, adds to an ongoing problem Da Vinci’s Demons has with its straightwashing and its treatment of GBLT viewers. Not only was the straightwashing inexcusable, but it was further exacerbated by the way Goyer and his crew hyped the show’s inclusion before its release - playing up Leonardo’s non-existent bisexuality (seriously, we’ve seen shows and books that have had their characters mentioned in passing being bisexual and then constantly focusing on opposite-sex love interests and never mentioning it again: inclusion cookies without having to sully the screens for straight viewers - but Da Vinci’s Demons didn’t even go that far!) and constantly assuring viewers that any concerns would be addressed in the sodomy trial episode. They were not, not even slightly - and the actions of David S Goyer and the actors in defending, downplaying and dismissing this only rubbed salt into the wounds.

So bad was it that The Backlot even posted expressing their regret for the coverage they gave this show, feeling they were treated chumps for having been deceived into giving it so much attention. (And I have to give the Backlot a lot of respect for making that post, to owning their hype, expressing their regret and responsibility; especially since at the time I was pretty angry at them for giving so much of a free pass for the show’s straightwashing).

Da Vinci’s Demons has a major problem with homophobia and it’s very clear by David S Goyer’s words that that is not going to change as we head into season 2.