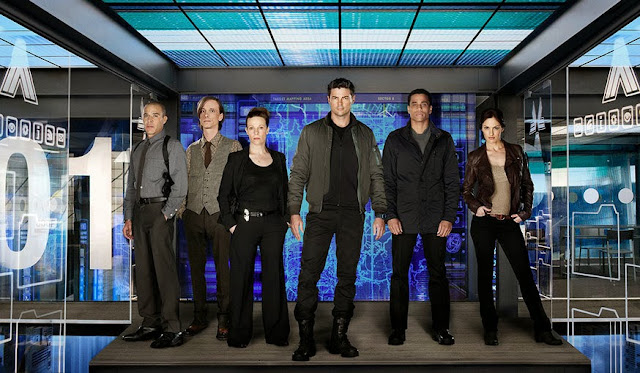 An artsy cameraman (really someone needs to keep their cameramen under control) treats us to an eye boggling scene of a man running – not sure from what, but he’s barging away through the crowds – occasionally switching to a camera vision with a green box around his face. When security guards try to confront him about his rather erratic behaviour he panics about “they’re going to find me” and then he falls down dead – a projectile apparently breaking glass and rustling someone’s newspaper (a future newspaper is just a film of plastic… and not just a downloaded file?) to hit him in the very crowded subway.

Cut to an anger management group and the leader praising someone for how he’s managed to control his endless seething hate (this would look more convincing if his facial expression didn’t suggest he was 5 seconds away from stabbing someone); he even says as much to her, he still loathes everything. But this is progress! See he loathes everyone but he hasn’t tried to strangle anyone! He’s bottling his rage into a healthy seething pressure cooker. YAY!

When he leaves he’s greeted by Dorian and a bit of snark and they head to the crime scene (for more snark about Detective Richard Paul the arsehole) and more bits of plastic with moveable images on them which still seem vastly inferior to a tablet. Looking at the bullet holes, Richard thinks there were 3 shots fired – though they only found one bullet and no-one saw a shooter; Richard’s MX points out that it was possible for one bullet to ricochet and be responsible for all the damage – but it’s a slim chance. John asks Dorian and he doubts the scenario because of the lack of residue for each ricochet – the MX objects that Dorian is obsolete; John duly ignores the MX as Dorian points out the circuitry in the bullet suggesting that while it did do all the damage, it probably wasn’t due to random chance ricochets. When the MX doesn’t shut up, John shoots it in the head.

Back at the police station, Maldonado is duly pissed about John actually firing his gun, in public, for no damn good reason. Richard is pissed because John broke his MX (which ends up with a  childish scuffle when John says Richard doesn’t care about MXs and Richard threatens to shoot Dorian). John thinks that MXs are just machines and it’s quite reasonable for him to dispose of “faulty” machines.

No John, when you work with a faulty machine, you send it to be repaired. You flag it to the appropriate maintenance people. You even turn it off. You do not draw a gun and shoot it in a crowded place because that is dangerous. And you don’t destroy it because it costs money and you don’t have the budget for snits.

John throws in an unnecessary gay joke as Richard leaves and Maldonado puts on her understanding voice in hoping John will work better with therapy – now back to the case. Uh-huh, that’s reassuring: because if you’re actually going to say John has anger issues that causes him to shoot things that annoy him then he should not be on duty. No no he should not.

Off to see Kira, Anton, the dead man’s girlfriend who works at the same company as he did. On the way Dorian pokes John because he likes him – and defended him to the MX, awww. Rudy also calls to confirm that, yes, it’s a special electronic guided bullet.

They talk to Kira and find Anton was pretty inoffensive, though he was being recruited by a headhunter. Dorian examines tech that recognises and tracks a person and then tries to show them targeted advertising (tech Anton created) – he points out to john that this is how Anton could be tracked and killed since these sensors are everywhere. Rudy rings with some more pieces of the puzzle – the circuits in the bullet were stolen by arms dealers. Anton sold technology to arms dealers who then killed him with it.

Cut to said dealers showing off their product to a buyer – who wants a demonstration. They decide to use Kira as the target (since she needs to be killed anyway apparently)

John and Dorian exposition the team and the check up on the headhunter Kira mentioned – except no-one of that name (Natalie) works for the company she mentioned. But main plot is distracted by him noticing Maldonado interviewing Reinhardt. My gods, is this meta? This looks like meta! He’s the Insyndicate guy who was looking for something in police evidence in the pilot. Maldonado wants him to show them what they Insyndicate was after in the warehouse; John shows up so Reinhardt can taunt him and try to get him to convince Maldonado to drop all charges against him in exchange for the information. That’s not going to happen.

Back to the main plot and they confront Kira about her recruiter story – and Kira admits that she may have had the name wrong (or Anton may have lied) and describes the woman – she’s clearly one of the arms dealers we saw earlier. Speaking of – they set up their equipment for the demonstration and fire their homing bullet. It darts through the city as Dorian gets more and more agitated by the cameras all around – and he steps in front of the bullet.

It’s a good thing Dorian is a gazillion times tougher than an MX, isn’t it? The damage does make him only speak Korean, though – just run with it, it’s probably one of the more realistic things on this show. They put Kira in an armoured car so she can’t be shot then open the door for a nice long conversation because John is hardly the brightest star out there.

They take Kira and her daughter Amy to a safe house. Kira is desperate and worried and considered being “scrubbed”, which seems to be a memory erasure, making her no longer a threat to the assassins. John talks her out of it and now wants her to be bait

Police procedures are fast and loose in the future.

Valerie tracks down a safety deposit box Anton was using and they find a lot of random items and a video threatening Kira – they were forcing Anton to co-operate, he wasn’t helping by choice.

Valerie and Maldonado show Donavon and John an advert on the net for the new bullet – including footage of Anton’s death (the advert is in Chechen, which doesn’t seem likely to get a very wide audience) and they learn that Kira has left the safe house – though that seems to be John’s plan, she’s just going for it alone. Especially since she’s underground where the bullet can’t get her, forcing the dealers to go find her in person.

Checking the location, they realise Kira has gone to a scrubber – and John and Dorian burst in the underground memory shop (which I really want to see more of). They find Kira and she’s angry – she wants them to find her and see her get her memory scrubbed. They try to get her out – and run into the arms dealers. Firefight time! Using Dorian as a bullet shield (good thing he’s tougher than an MX) they bring down the arms dealers.

Kira, this week’s damsel, is rescued so she can be reassured that Anton really did love her and wasn’t evil. Awwww. The code is also a romantic momento from the pair of them.

Valeria and John flirt some more (I like how pens are presented as old fashioned and unusual though) and Maldonado thanks John for going a day without violently destroying police property.

The way John treats MX and Dorian is probably the greatest indication that Dorian has crossed the line from machine to human in his eyes. However him shooting the MX was ridiculous – and I actually like Maldonado’s rant more than detective Paul’s (though, really, annihilating police property for funsies is utterly ridiculous) – he just fired his gun in a crowded subway because the android was annoying – why is John considered fit for duty again? Are we actually supposed to support John in this because he’s backing Dorian?

I have to say I’m not exactly sold on Almost Human’s attempt at trying to sell us on the extremes of modern technology if they’re taken too far – because these episodes seem to be written by people who don’t truly understand the concerns we’re trying to warn about. Like in the last episode – it was such a shallow view of social media (and missed that the man was hardly the first spree killer to kill for the attention) and now we have the evils of the endless cookie-collecting of the internet where every detail about us is collected constantly. Which, yes, is a concern –it’s a concern because there’s a huge database of information about us being used by people who have only the most quasi-consent to have that information and very little actual regulation or ethics about how they use that data, effectively annihilating our right to privacy in the drive to sell us more shit. That is a concern. Not that facebook may develop a homing bullet.

The idea of using futurist sci-fi as a way to warn us about the evils of the present is a good one – I approve. But you need to actually present the actual concerns of the present, otherwise you lose the chain of causation and fail to make the point you’re struggling to develop.

We have some attempt to touch on John’s mental illness – I’ve said before that this has been very neglected. Except… anger management? Yes, I’m sure rage can by a symptom of his PTSD – but the first episode shows him having actual flashbacks and losing time, I think something more than anger management group therapy is needed here. Worse, John’s mental illness seems to be used almost as an excuse for him to be, well, violent and untrustworthy – while at the same time downplaying both od these.