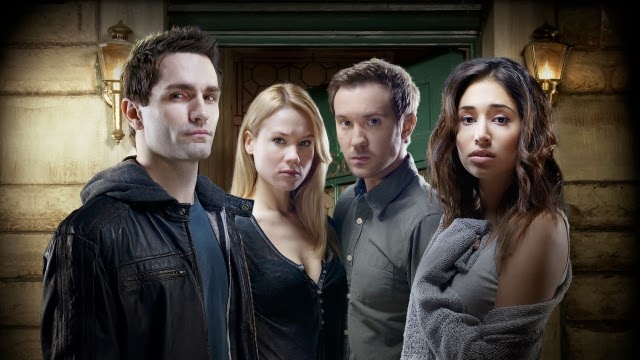 We ended the last season with so many cliffhangers it was less “cliffs” and more “hanging perilously by one finger from the very top of Everest”, so let’s see how they manage to put all of this back together again.

Sally, despite last being seen falling down a nasty pit, is now having a cucumber spa facial. The after-afterlife doesn’t look so bad. Except Donna seems to be her spa buddy – though Sally is giving her the silent treatment.

Aiden is having much less fun – running through the woods chased by an angry werewolf. In daylight (I assume Josh). However there seems to be a plan, as he screams for Nora and she collects a gun, Aidan leads wolfyJosh into a trap (baited with a goat) and manage to trap him behind silver bars. Nora reflects on baiting her husband with a goat for her honeymoon.

Well, those mental images aren’t going away any time soon.

Nora and Aidan are camping in a caravanette in the woods, presumably to be near poor wolfyJosh. Apparently they’ve made an entire daytime activity of releasing the perma-werewolf and then running away from him while he tries to kill you: or they need to do it three times a day just to keep Josh calm.

See, this is the problem with getting pets without proper research – you never realise how much energy they take.

Aidan is playing in happy denial land, sure that Josh totally recognises him while trying to chew off his legs and he’s just annoyed at being stuck in wolf form. I mean, who hasn’t tried to rip off a few limbs when you’re in a bad mood, right? Nora, a werewolf herself, is less convinced that Josh even has moods or thoughts while he’s a werewolf – because werewolves don’t. Aidan’s delusion also stretches to Sally, while Nora is losing hope. But she hugs Aidan for comfort which shows how much these characters have grown together.

Back to the spa, with Donna and Sally being friendly, connected and Donna explaining that Sally made the spa. Sally starts to lose her glee as Donna explains how things are – Donna explains things, Sally starts to freak out and creates a happy space: the spa. And they’ve done it several times over; because Sally wasn’t really ready to face where they really are. Which is when Sally’s arm in the water is suddenly coated in blood

Exposition! They’re connected because of their mutual killing thing, but Donna dragged her to the spa!pit to save the world. Very dramatic – but because both of them have dodged death for so long (especially Donna) they have risked reality and it’s naughty/bad/wrong apparently. Having finally realised that (took her several centuries), Donna has decided to take them both out of the equation to stop them doing any more damage – and by destroying Sally’s death-spot (where she died), she’s dropped them both in a “holding cell”. Sally questions her own presence but Donna thinks Sally has power – and is awfully reckless in the using of said power.

Donna’s end plan is apparently oblivion – they stay imprisoned until she figures out how to destroy them both. Her plan is probably not that popular with Sally.

Back in the woods Nora dresses up and goes to see Josh – non-wolfy Josh. They have 30 minutes in which to enjoy Josh’s humanity (which they do). Afterwards they have time to kiss goodbye before Nora has to leave and shift in the full moon.

Josh, not needing to shift, goes to see Aidan for hugs, beer and bonding. (And a brief revelation that the plague is now over, all vampires inoculated). Josh talks painfully about being a perma-wolf (or every time the sun is up anyway – or any time that isn’t the full moon) and again repeats a request he’s made before – he wants Aidan to kill him. Nora and Aidan, running Josh ragged while paying for the house, trying to keep their jobs and not even having time to find Sally is a pretty damn huge to do list and there’s no way they can keep it up. He grabs Aidan’s emergency silver knife. And Aidan doesn’t stop him, which seems to restore Josh to his senses. He doesn’t kill himself but Josh still worries that they can’t keep it up and someone’s going to get hurt.

To add to the angst, Kat texts Aidan – another part of his life that is, presumably, falling apart while he tries to explain why he is camping in the woods and skipping out on important events for her. Josh, with excellent banter, convinces Aidan to go to her – though it will be next month before Josh is human again.

Back to the afterlife and Sally has done some thinking: Donna destroyed her death spot dragging them down, so can’t she use Donna’s death spot to return? She twists her illusory spa, which is dramatic and nifty – and binds Donna in vines when she tries to interfere, leaving her only able to shout in protest (now there’s some power). The pool is turned into a bloody vortex which she approaches – and is suddenly hanging from the neck. First in her haunting spa….

…and then hanging from the ceiling of a supermarket. A nice normal supermarket… which is then filled with puritans screaming at her for being a devil, then she flashbacks to ye olden times (and briefly flashes back into Donna, who, it seems, was hanged as a witch) before back to the supermarket. Loosening the rope, Sally teleports away from the angry ghostly puritans which are no fun at all.

Alone, Josh turns up the angst, looking at Nora and Aidan’s busy calendar and paperwork of them making a life together he’s not part of.

Aidan does rescue Kat from her dreadfully dull colleagues but in the press he sees a woman – a woman who looks just like his long dead wife, Suzanna. He makes his excuses and tries to follow her, but she’s not outside and his flashback makes his eyes all vampy. Inside the Suzanna clone introduces herself to Kat and remarks how doting Aidan is – but despite an invitation to spend time with them, but the time Kat reaches Aidan she has mysteriously disappeared.

They go home, they have sex – and Kat turns into Suzanna in the middle of the process; he babbles apologies, she offers understanding – then he wakes up when Sally shouts. She found him and maybe Suzanna was a dream (if you believe that, I have a bridge to sell you.

Sally and Aidan recap – and there’s glee, but Aidan’s also kind of worried about the dire warnings Donna predicted.

And when it’s time to lock himself in, he doesn’t lock the door. Aidan and Sally arrive for gleeful reunion with Nora – and find Josh has got out. Time to be bait again Aidan!

They set off – and Aidan, tired from running looking for Josh, let’s slip the whole “Josh wants me to kill him” thing – Nora would probably react badly to that if wolfyJosh didn’t just appear. Aidan considers drawing his knife, but refuses, he won’t kill Josh – but Sally will conjure a fiery barrier around him – surprising herself as much as the wolf. Nora quickly tranqs him.

Awesome new talent - with the unfortunate side effect of making Sally disappear….

Aidan goes to work – and finds ambitious vampire Blake there, playing funeral director to turn the recently deceased (just to replenish numbers). He’s torn between not wanting to get involved and not wanting the young vampires left after the plague to completely screw over the city but Blake is sure she can manage without him. Fine – but whatever Blake is doing he won’t let her do it in his hospital – that’s disrespectful.

When she goes back to her base she seems to be playing secretary for the real boss – Kevin. But a Kevin lacking the deformities of his odd creation. Yes he is the ruler and seems to have a shed load of daddy issues for Aidan. He also has a scolding for Blake over her “tone” – meant, I think, to show he is really in charge, he can be cruel and that he’s powerful enough for Blake to fear.

Wandering the forest, alone where she appeared after vanishing, Sally finds a section of corridor – looking like part of their house had just been transplanted into the woods. Inside a bedroom she finds a circle of women chanting “the blood of the child revives us” over a girl, crying on the bed. That’s probably not a good thing – confirming that, one of the women stabs the girl.

Aidan and Kat really have sex this time – and she says she loves him (nothing said in the afterglow of sex is binding. It is known. Also banned: awkward conversations in the afterglow – which Kat is less good at). She is pretty good at elaborating on it in a very mature fashion – including not having a tantrum if Aidan isn’t eager to return the words.

And then, when Kat’s gone, Suzanna rings the doorbell. Because things need to be moar complicated!

I have said it before and I will say it again – the banter between the characters – even if it was very emotion wrought angst between Aidan and Josh, and Sally and Aidan really does make this show. The way they argue and bicker and talk – it’s part acting, part excellent chemistry – they just work as friends. And Nora is starting to find her place within that

Kat’s bracelet – her grandmother’s – looks just like a bracelet Suzanna had… more evidence of Kat being a descendent?

I am glad sally returned to Aidan this episode – I was worried she was going to be separated again. In fact, all the storylines this episode have definitely whet my curiosity

I even like Aidan and Blake – Aidan is so much older and why he doesn’t like vampire society or want to be part of it there’s also that little conflict of expecting these much younger vampires to show him some respect – while leaving him alone, of course. It’s a nice little character development conflict

But I think I would have preferred Blake in charge, even manipulating Kevin, because she was a far more ambitious and capable character who was already established. Also, Sally’s storyline can be many things, but please don’t let it be more hallucinations –we’ve done that

Being Human, I am intrigued - continue