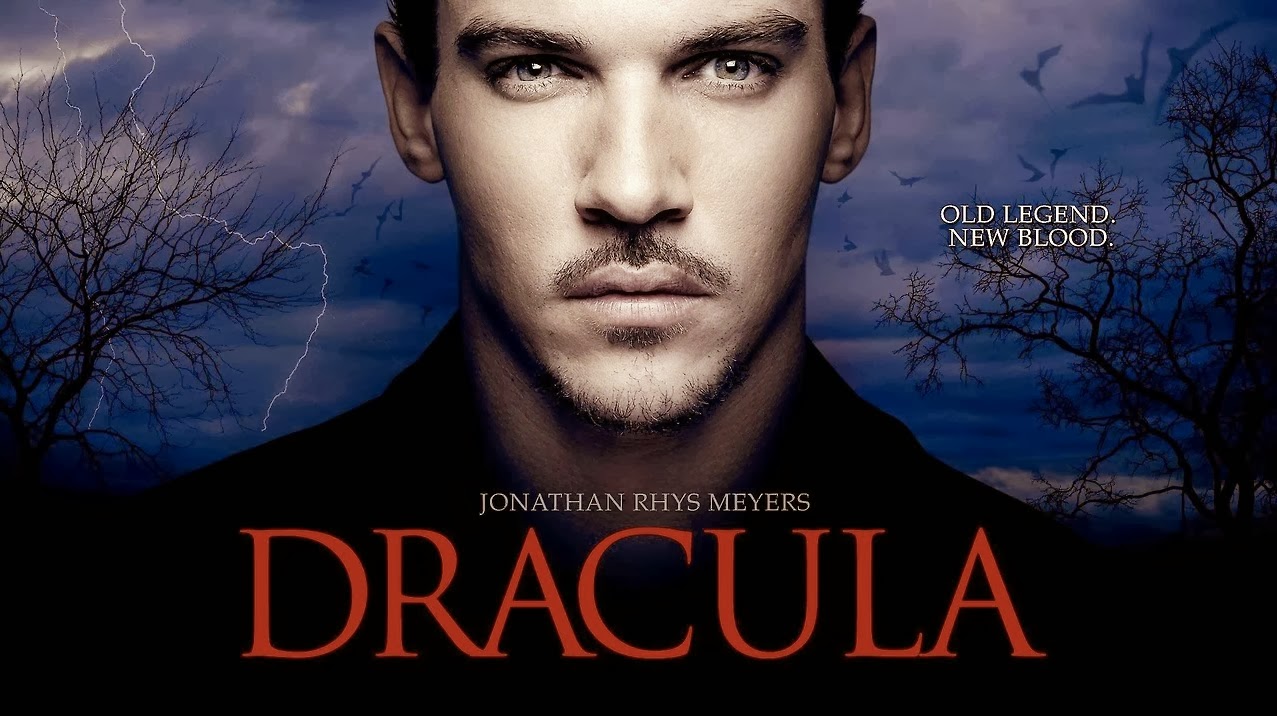 Grayson needs to top up his angst levels so mopes about when he was first captured by the Ordo Draco. Renfield again tries to get Grayson to drop his obsession with Mina since he’s stalking her again

Mina herself is busy jeopardising her hopes and dreams and career by searching for Van Helsing’s serum (vampire blood). She’s nearly caught but it’s only her dad wondering why she’s avoiding everyone and pointing out he’s spotted her obsession with Grayson. She describes her obsession; and I’m pretty sure her dad has basically advised her to chuck Jonathon and go for Grayson. I have to agree. One is an unholy blood drinking demon, the other is Jonathon.

Demon it is then.

Lady Jayne remembers she’s a hunter and points out the vampires she’s killed to Lord browning who praises her in the most patronising terms. She’s sure there’s another elder about, what with so many young vamps trolling the town

She goes out hunting and finds another vampire – she demands to know the name of her master. The vampire is initially reluctant but gives up: The One, Vlad the Impaler the first etc etc super special. Lady Jayne is suitably impressed. The vampire shoots herself in the head rather than tell her any more

She reports that to Browning, Davenport and another Order member (both of which think Dracula is a myth and she’s being very very silly). She recounts Vlad’s history (including his one membership of the Order) and how he was created. While Browning doesn’t dismiss her out of hand, he still wants proof.

To Jonathon and he’s still fretting away at how Grayson manipulated him with the fake story – and tells all to Szarbo. Szarbo gives him a gun in case Grayson tries to silence Jonathon like he did the actress.

Jonathon goes to Mina and gives a list of things he thinks Grayson has done in the name of advancing his project – not just General Shaw, but Lord Laurent as well. She asks why he keeps working for Grayson if he’s evil – and Jonathion basically says “REASONS!” and tells her to stay away. Which doesn’t look like he has a hidden motive AT ALL.

Grayson gets another dose of daylight drug and Van Helsing criticises him for his unfortunate killing of the head of Scotland Yard. After renewing his vow to get his revenge somehow, Grayson pops in on Lady Jayne. Who doesn’t want to see him – she confronts him with his love for Mina and he agrees. She won’t play the game any more and he leaves.

Lord Davenport’s plans also advance – he has arranged to have some “reliable” men “introduced” to Mina.

This isn’t Grayson’s best day, though Renfield does hope that this once he will refrain from killing someone – and offers a bribery option rather than ripping out hearts. Grayson reluctantly agrees, leaving heart ripping as plan b.

Mina drops in to dramatically confront Grayson for scaring Jonathon – he tries to cover by claiming he needs to be ruthless and that Jonathon is no less so – but Mina just puts that down’ to being “infected” by Grayson. She very accurately skewers his charm and how Grayson uses it as a weapon before storming out after a rather epic slap down

I still say the blood drinking demon is preferable to Jonathon. Grayson is really not having the best day.

Meanwhile, Lucy continues her appalling plan to seduce Jonathon. She makes her move, confessing her supposed feelings. He rejects her but does give her one kiss as a consolation prize (wow, how egotistical do you have to be to believe that line?) – but even then he manages a peck before recoiling for precious Mina’s sake. Lucy bitterly mentions all the times Mina has visited Jonathon at work… except she didn’t see Jonathon.

Grayson has a proper little tantrum over Mina’s rejection. He storms out in a rage but Renfield stands in his way, Grayson pushes him aside – but before he can leave Renfield grabs him and throws him back: he won’t let him leave the manor in such a terrible state. Grayson grabs him and pushes him back warning him not to stop him – for his own sake. And tries to leave again. Renfield is FAR too stubborn to listen and wrestles him into a table again.

They both lay stunned for a second and Renfield takes the chance to say some quick words of wisdom – how Mina makes him hate the one thing he needs to defeat the order – being Dracula. He advises Grayson yet again to either forget Mina or take her.

More drama – Jonathon goes to Mina to scold her for disobeying him and seeing Grayson and he talks about Mina and Grayson being together, she was willing to take the former, but that finally causes Mina’s spine to stiffen. She gives reasons why she goes to see Grayson but he accuses her of lying. Mina just stands there looking all trembly and tearful (I take it back about the spine)

Lady Jayne busily tortures vampires for answers – and hears that Dracula can now walk in the sun.

Van Helsing rants and raves about their plan failing to Renfield – hah, he can remain calm during Dracula’s rants, what chance does Van Helsing have? Renfield comments that none of their bribes work because of Browning’s incredible influence; Renfield speculates that he’s the head of the Order. Van Helsing claims to have never heard of the man – but his memories of his lost family point to Browning being directly involved.

Mina is still at the office and steals a vial of the blood – when the men Davenport arranged catch her, hitting her head, tie her up and put her on a table – planning to burn her with sulphuric acid. And then Grayson arrives. The men die gruesomely while Mina woozily passes out again.

The next day, Lady Jayne has her proof for Browning – Grayson has impaled the 3 men on some railings. Vlad the Impaler.

Mina is in hospital, though she will recover. Jonathon visits while Grayson lurks. She wakes and describes her attackers and Jonathon recognises the description of the man with the birthmark – he rushes out to the police (ignoring Mina calling his name – how much more evidence do you need Mina? Jonathon is not a nice man – go with the demon). Grayson chases after and Jonathon tells him who the man is – Davenport’s man – and he will go to the police. Grayson scorns the idea that the police will do a damn thing to a man of Davenport’s influence. So Jonathon decides to confront Davenport personally

See, Mina, he’s not that bright either.

Jonathon enters Davenport’s home and holds him at gun point. Davenport claims complete ignorance and suggests that Grayson manipulated him to go after Davenport. He tries to show Jonathon the painting that is supposed to prove Grayson’s obsession and illict relationship but Jonathon has fallen completely to pieces and shoots Davenport.

Of course he does

He’s shocked and appalled that breaking into a man’s house and pointing a gun at him may get that man shot – and looks at the painting anyway.

Jonathon deals with all this turmoil – but going to Lucy’s and kissing her – and from there, to bed.

Grayson maintains his vigil over Mina’s bedside rambling on about his love and them belonging together. Afterwards he joins Renfield at home and they throw the file they have on Lord Davenport in the fire. And, yes, manipulating Jonathon was all to plan.

I loathe Renfield’s “take her” advice, even to a vampire. It really emphasises how much Mina is the prize for, well, everyone. The whole plot of this episode somewhat revolved around her, even as much as it was about Grayson’s world falling apart, most of it was Mina related. Still, Renfield being willing to wrestle Dracula, let alone succeeding in stopping him shows the bond they have which has been one of the better parts of the whole season.

This damn painting – it makes NO SENSE! It’s not that impeccable a likeness – and why would anyone believe Davenport that he stole it from Grayson?! For that matter, why would anyone believe that a man would pay a fortune to buy a medieval painting that looked like Mina because he’s obsessed with her rather than having a new one painted!?! A better likeness! Unless you know Dracula’s history there’s ZERO REASON to connect that painting with Mina or think that it means anything romantically to Grayson.

Jonathon… what is there to say, really? Can something eat him? And Mina as dessert (the lack of spine makes her especially chewy)?

Lucy now actually sleeping with Jonathon to get her revenge on Mina? This is going to end up as one of those shows I need booze to watch

I still love so much of the plot the world and the aesthetic – and then there’s just things I want to strangle.