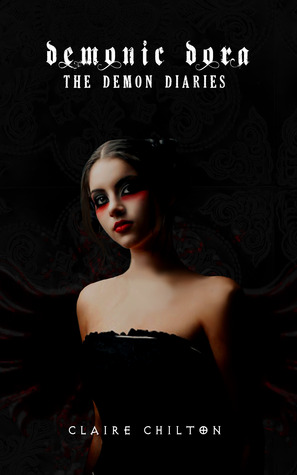 We first meet Dora in the church of her televangelist father.  She is the typical brooding teenager in that rebellion is her top priority. While her parents are busy trying to save souls, Dora's goal is to successfully summon a demon.  Having failed many times, Dora is extremely hopeful and surprised when Demons attack the congregation.  It is only when she returns to room, sure of the punishment to come that she realises she hasn't summoned the thick horned, fire breathing demon with a tail but the dashingly handsome and beautifully built, blonde haired Kieron. For his part, Kieron has determined that it is his duty to serve Dora and if possible get into her pants.  What neither of them realise is that their time of getting to know each other on the earthly plane will be short because as a witch, the townspeople, lead by the rotary club and Dora's parents intend to burn her alive as a witch.

Given the choice between burning to death and hell, Dora chooses to return with Kieron to hell.  At first it all seems cool as Dora manages to learn to cast spells and even pick up a pet demon.  It isn't long however that Dora learns that the cost of being in hell is losing her pure soul and the love she has for Kieron.

In many ways, Demonic Dora is your typical angsty YA novel.  Both Dora and Kiernon have troubled family history and it very much informs their view on the world and actions.  There is a lot of poo in this book and yes I mean it literally.  It felt like someone was flinging poo at someone else on almost every single page.  It was so bad that at one point Kiernon even mentioned Dora's fascination with throwing poo to defeat her advisories.  At first, these situations were absolutely funny but over time became puerile and irritating.  As this book is meant for an audience far younger than I, I can sort of give this a bit of a past.  I further didn't understand how an entire town could get together to decide to just make a pyre and burn one of their citizens on it.  This was never explained and made little sense to me.  I did however giggle about the fact that Dora was chastised for using the word "holy" and encouraged to say "fuck" instead.


Demonic Dora truly left me with mixed feelings.  The world building of Chilton was absolutely great. Chilton's descriptions of hell in particular were imaginative and so far removed from the typical pop culture references.  It helped to alleviate my frustrations in times when the story seemed to jump from place to place without any form of cohesion.

As a protagonist, I simply adored Dora.  When Dora first arrived in hell she was a powerless human with a fully intact soul but over time as she learned the ropes, she became powerful.  What intrigued me about Dora was take no shit attitude and fearlessness.  Dora constantly used her wits to engage in battle, fully aware that she was the most powerless person in the room.  It didn't always work out in her favor but Dora's first instinct was never to sit and hope that someone would come and save her.

As for Kiernon, I found him to be irritating at times because of the way he consistently pressured Dora to have sex with him.  Sure, some of this can be cracked up to teenage hormones but there is a limit to my patience with that sort of thing. I won't say that it's good that he Kiernon didn't use his power to push Dora beyond her limits because that should be the default position.

Despite the fact that a large part of Demonic Dora occurred in hell - a repository for human souls, Demonic Dora was completely white washed and erased of any GLBT characters.  I could naively believe that this means that all marginalized characters supposedly get a ticket straight to heaven but realistically I believe that just like many authors in this genre, Chilton did not deem it necessary to include marginalized people. Instead of gay characters what we got were ridiculous stereotypes like:
"Good taste in clothes, and apparently he can dance too.  I'd swear he was gay if I didn't now better." Stereotypes are problematic for many reasons and they most certainly do not rise to the level of inclusion.

I am so conflicted by this book because it started off so strongly and truly engaged my sense of humor but in the end it seemed ridiculously childish.  This makes me wonder  if it's a case of your taste may vary rather a simple declaration that the problem is the book itself because of my long dislike of YA.  I am however interested enough in this series to read the second book because of the fabulous world building and of course Dora's pure awesomeness.  So the best I can say for now is that I am delaying a final judgement on this series.