Witchell: A Symphony by F. Trantham 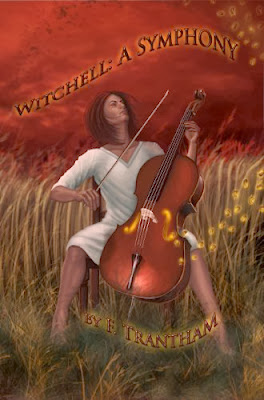 Tavin is an exile from his community and his people – the mages. Born with only a scrap of magic and barely considered adult, he is content to remain in the human world, desperately seeking normality and to forget that the Mageplane ever existed

Except soon it might not, which, with the return of his brother, brings Mage politics to his doorstep and the sudden need to protect his friends from the potential fall out of desperate mages seeking anyway to preserve their home

Fill it with thick, dark molasses.

Attach heavy weights to your wrists and ankles.

Now try to swim to the other side. This experience will approach the pacing issues of this book. When I reached the half way point and absolutely nothing of consequence had happened – indeed, most of the cast don’t even leave one house – I was beyond tired of it and stopped reading. I normally can read a 300 page book in less than two days – this is a bit longer than that, but it was 4 days before I hit the half way mark because it was so slow and I found myself finding excuses not to read.

It’s not that there are no redeeming features of this book – far from it. The world setting is fascinating. The idea of a parallel mage realm with its own culture that is so very archaic and formal and both alien and impressive is really well built. The consequences of it collapsing and dumping all of these magically powerful but culturally inept people into the real world would be an epic thing to explore. The nature of magic is really well described and built with lots of complexities and implications as to how it works, why the Mageplain is dying and what that means for Mage politics and conflicts and how the various powers manifest and interact and truly work. There has been a lot of effort put into make a very comprehensive magic system that is very real and fully fleshed out

But all of this is explained in a serious of truly tedious info-dumps, many of them nothing more than convoluted internal monologues with all this information just randomly splurged onto the page. Much of the rest is explained in a series of painfully awkward lectures from informed characters to the ignorant – without even the excitement of the ignorant being shocked are surprised by the revelation. The fact that magic exists and there are alternate universes out there is taken in stride with about the same level of shaken surprise one would expect from discovering a new and interesting condiment at the dinner table. The book is positively allergic to any kind of drama – any kind of action – that doesn’t involve Tavin’s trainwreck of a love life.

To add to this lack of any real action or drama, we have an enormous amount of padding between the info dumps. Long inserts of various character’s histories shoe-horned in there – yes it gives the characters more depth, but without any action or story to link it to, it reads like a series of random biographical excerpts about people I have been given no real reason to care about. Between that we have Tavin musing about his garden, endless long passages about music, his general angsting, fretting and pouting about everything, Amelia’s little holiday in Paris which, by the time I gave up on the book, was completely irrelevant to absolutely everything but was still taking up unnecessary page room. There’s a ridiculously long and unnecessary scene of them playing dress up, just because,  Beyond that, even the simplest activities – cooking, eating, playing music – needs to be described in excruciatingly unnecessary detail.

Now to the romance trainwreck:

Ben, Tavin’s friend/supposed love interest is gay – and he is described in very stereotypical terms. His mannerisms are “theatrical”, he uses the word “fabulous”, he is “dainty” and “delicate” and “terribly flamboyant” and his smallness is emphasised.

Tavin is bisexual – called the “Witchell Curse” apparently. With a very very strong preference to women. Through the book this is emphasised both in general (in those ENDLESS monologues) and directly to Ben by referring to his only past lover – a woman – in glowing terms. How, if he had to marry anyone, it would be Amelia. Even the one time he described Ben in anything approaching appreciation for his body it was when he was dressed as Coco, referred to by female pronouns and repeatedly emphasised that Coco was a perfect female illusion and in no way, shape or form was thought of as male, or even as Ben. That same level of interest has never been directed at Ben as Ben.

Despite this, they’ve been maintaining a quasi-romantic relationship for 6 years – 6 years after which Tavin still regards kissing as icky and has a deep horror of any kind of physical intimacy. Fine, that’s Tavin and his desires – but he shames Ben for wanting for, for actually being sexual while at the same time constantly teasing him with both physical intimacy (sleeping together, lots of touching) AND hints that one day Tavin will totally be ready for more – just be patient (and listen to him describe how wonderful some women are some more).

If this book made me feel for any character it was Ben, I would have wanted to be his friend so I can intervention him at what a disaster his relationship is. That Tavin would never give him what he wanted and would never let Ben go either, constantly teasing Ben with what could be while simultaneously shaming him for his desires and using him to fulfil Tavin’s intimacy needs. Then I would probably leave Ben alone because he’s not much of a character beyond a collection of stereotypes sewn together, but I’d help him with that utter trainwreck of a relationship.

And to top it all off, I don’t have a lot of sympathy for Tavin even aside from his treatment of Ben. He laments that his society treats him like a child, but that is how he acts. He is grossly self-centred, very child-like and entitled in his thinking fully expecting others to revolve around him, his needs and his time table. He derides and judges his brother for what he views as a decadent lifestyle, while his brother is actually dedicating his life to trying to save their society from collapse – and to top it all off, Tavin actually views said collapse with eager anticipation because it will make his life easier. Yes, he has reason to fear the extreme actions some mages will take to prevent the collapse – but he barely acknowledges the devastation for his people he is actively wishing for – it takes Lyvance, his brother, to see that.

This book had a lot of potential, a truly amazing potential. But it then drowned that potential in the gloopiest, slowest, most heavily distracted writing I’ve read for a long time – and topped it off with a character who has made me steadily more angry as the book progressed and a shallow, stereotype laden portrayal of a gay man that only managed to gain sympathy from me because of the way he was treated.