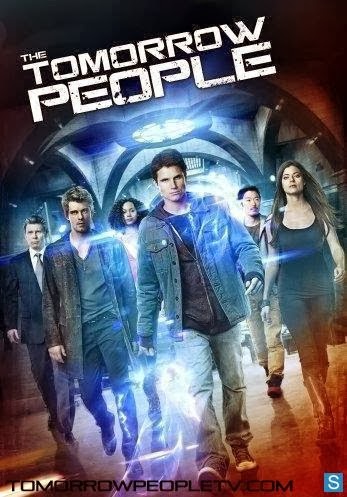 Stephen meets his dad in limbo and gets some ominous, vague warnings about the Founder – he’s dangerous to everyone! For Reasons! Stephen wants his dad to come back without making the logical leap that he probably needs a body to come back to (the one with a bullet hole in it) and his dad tells him to find Simon Plane.

Is this going to be a thing? Go to limbo, find his dad and get a random name to find? Because we already did this with Thanatos.

Stephen wakes up, he’s alive (I’m sure we’re all so relieved to hear this) and fills everyone in on his brain’s oxygen-deprived hallucinations. I mean, visions in limbo. To confirm that Stephen wasn’t hallucinating, Cara checks his memory… to see if he can remember his hallucinations? Actually it seems he can’t. Except he can remember, but Cara can’t read the memory of hallucinations because they might not be real, despite his memory and…

…I’m not even going to try and make sense of this ridiculousness. She can’t read his hallucination memories for REASONS.

Cara thinks that means they can’t be real, but John who is suddenly all Team Stephen possibly due to guilt/need for redemption or simply because if daddy isn’t dead then he hasn’t epicly screwed them and been lying for a several years, wants to give the benefit of the doubt. Besides it’s not like they have anything better to do.

Tim, their convenient super-computers, notes Simon Plame was one of the first breakouts who hasn’t been heard of since Stephen’s father disappeared (anything you want to confess there, John?) and Stephen leaves in a huff when Cara suggests that maybe his dad is dead.

I think Stephen hangs around rooms waiting for someone to say something he doesn’t like so he can leave in a dramatic huff. If they didn’t he’d be incapable of leaving.

Stephen goes home to find his mother has a new boyfriend (place bets now – who thinks the new boyfriend is a) the Founder or b) some other nefarious evil person?) and, of course, Stephen’s kind of pouty because their dad could come back and mum must keep everything on ice until then. Even little brother Luca recognises that bullshit for what it is.

At the HQ Cara and John squabble over giving Stephen false hope; she accurately skewering that he’s using Stephen’s hope as some form of forgiveness (or at least ducking blame). John decides to go to the next absolution step – tell everyone the truth. Cara thinks that’s a pretty huge disaster to the Tomorrow People.

To an Ultra facility where captured paranormals are held in cells and experimented upon – and one inmate has cut off his own hand to stop them using the power dampening cuffs on him – and to give his severed hand to his fellow to use as a fake hand for his cuffs – so when he’s released he isn’t cuffed. Nice trick if you’re really desperate – Errol teleports and is free (at least, that’s what the sad, floating girl calls him)

Stephen visits Ultra’s computer (the one that apparently makes Tim obsolete) known as Alice. I wonder how long they think of acronyms until they find one that sounds like someone’s name? Anyway he wants to know about Simon Plame, because he’s not even trying to pretend to be undercover at Ultra any more. Predictably, Alice locks the door and summons Jedikiah to ask why oh why would Stephen even know that name, let alone ask about it?

Stephen covers by explaining he saw the name in his father’s research notes and Jedikiah quickly assures Stephen his dad was out of his ever loving mind. When the alarm goes off – Errol’s escape has been noticed. Stephen is shocked to realise that Ultra has a prison.

Seriously, Stephen? Really? How many times do we have to show you that ULTRA IS EVIL?! And what did you think happened to all the breakouts they found?

Stephen and another agent are dispatched to catch Errol who is manhandling a woman living in his old house, looking for his wife. The first agent shoots Errol – and Errol uses his Telekinesis to send the tranq bullet back into the paranormal. Oops. Stephen tries to speak mind to mind and Errol lashes back – causing a massive headache and a small earthquake. With his Telepathy, it seems, then Teleports out

I think Ultra’s “research” is ill-advised. And Stephen is a little outmatched.

Meanwhile John has made his little revelation to the assembled masses of Tomorrow People. No, really, masses. There are a gazillion of these people. What do they DO all day?! Why aren’t they trained to fight? Why aren’t ultra being dogpiled every time they emerge?! (we also have some severe POC mole people going on here) Anyway, he gets some grief for being able to kill and Cara speaks up because no-one can help being an Ultra lab rat. One of the people, Mike, repeatedly challenges John, asks why they should trust John and why is John the only one to lead them – he doesn’t want to lead, but he thinks Cara would be a better choice

I agree. Oh that’s not praise for Cara. Her competition is John. It’s almost a microcosm of the problem of a two party system.

Election time – with nifty candles and no private ballots. And Cara is the winner by a landslide. Uh-huh, moving on – John tells Stephen about the Citadel, the prison where Ultra experiments of paranormals and even expanding powers using it. What Errol did is called “pushing” only the most powerful Telepaths can do it. Cara has a plan – find Errol and lead them to the Citadel to save the Paranormals

Oh I take it back, Cara actually wants to do stuff – that’s an improvement

Back to domestic scene and Stephen is teasing his mother over her date (semi-good naturedly) and the date, Pete, turns out not to be the Founder – I’m surprised. He’s going to be evil.

Back at HQ Cara lays out her… plan. Basically “Stephen tells us Errol has been captured, we take over”, keeping it vague so Stephen will act surprised enough to be convincing (hah, like anyone cares about his cover). Stephen has a little snit that they dare have any plans beyond “let’s find my dad” but Cara puts him in line

Stephen and Ultra pick up Errol, just wandering around lost, clearly disturbed by his experiences – begging Stephen to kill him rather than take him back to the Citadel. The ambush goes off perfectly – except for the minor addition where Stephen has to take a bullet to make it believable. But it’s ok, he’ll try not to hit something too important (and Stephen doesn’t even try to act an appropriate amount of pain)

Ok I’m going to give this a pass since most TV shows think you can actually be shot and be just oky-dokey afterwards, so I can hardly blame The Tomorrow People.

Jedikiah is all gleeful to see Stephen taking a bullet for Ultra and now is super sure of his loyalty. And just to be super-duper-sure of that loyalty, he’s going to get a super dose of opiates for the pain and totally-not-to-dampen-his-powers-honest.

At Tomorrow People HQ, Errol is not the most stable of guests. Cara gently talks to him and brings him back from the edge before they talk to him about the Citadel, after Tim judges how close it must be based on Errol’s Teleportation powers. He’s blocked out most of his memories so Cara delves into his head and come up with a location. Of course, John is worried by them continually doing stuff and advises that this cease and desist immediately – she doesn’t accept that and wants John to stay behind as back up as well. Just as she had to all those times.

Drugged, Stephen manages to get a warning to John that Jedikiah has figured out the Tomorrow People intend to hit the Citadel. Cara & team arrive at the Citadel only to find the controls for the cells don’t work. Ultra launches an ambush – and this time the Tomorrow People fight back – yes, more than just Russell, John and Cara.

They fight and it’s excellent – but Cara’s plan to save people is reduced to hammering ineffectively on the glass cells. As she tells the others to flee, Cara manages to break one cell, holding a girl called Charlotte, while Errol unleashes his super-telepathy at the guards. Jedikiah arrives and holds Cara at gun point, ignoring her threat about exposing Morgan – Errol stands in front of them and Jedikiah shoots him, in the head. He threatens Cara again – and John appears behind him with a gun to Jedikiah’s head

Shoot. Him. Will someone PLEASE kill their sworn enemy in one of the 8 gazillion times they have him at their mercy?! Alas, no – they just leave.

But it’s ok, Cara will show Jedikiah how tough she is – she’ll turn in Morgan! Hah, that’ll learn him (or you could have killed him.) John delivers the expected moral check Cara needs – sacrificing one of their own to prove a point is not the way to go

Stephen wakes up to find – Jedikiah still suspects him of being a double agent! See, a trained assassin like John doesn’t normally shoot people in the super-special-totally-safe-place-to-shoot-someone in the shoulder. Stephen has a tantrum at constantly being doubted and demands some quid pro quo for his constant loyalty (*snerk*) – info on Simon Plame. Apparently Jedikiah killed him for trying to steel Stephen’s dad’s corpse; Jedikiah also cremated Roger.

At HQ, Stephen passes this on in despair but John scoffs – Jedikiah was a liar and he would hardly incinerate his own brother… whut? I would say a good 70% + of my dead relatives have been cremated – quite a lot of us are quite content to “incinerate” our loved ones, thank you. But this convinces John, Stephen and Russell – but not Cara.

Cara is having a huge doubt moment since she got Errol killed and Stephen shot on the first day: Stephen spins it and adds that he did actually take a bullet for her, which kind of shows his faith in her, which has a point.

Stephen goes home for more tense passive-aggressive hostility to his mother’s new boyfriend. He tries to listen to the man’s mind – and is blocked. (TOLD YOU SO!)

I just… don’t understand John’s lie. Why pin their survival and salvation on Roger, a man he thinks he killed? Why hold up this messiah figure? Wasn’t mutual support and survival sufficient? Wasn’t trying to find their own sanctuary enough? They could have moved far away, away from Ultra’s headquarters and relief on their natural herding instinct (weird thing but apparently true) to draw their fellows in – rather than waiting around for something John thought could never happen.

Why does Stephen even pretend he has a cover at Ultra now? He makes so little effort to actually keep his double agenting secret.

The election drama – how ridiculous was this? They seemed to be all-but co-rulers anyway, or at least every decision is discussed between them. It’s like picking between 2 people – one to be president and one to be vice-president – and then swapping them round.

However I am liking the more pro-active stance the Tomorrow People are taking rather than just hanging around and hoping – and I’m definitely liking Kara actually making decisions for once –and taking point at that. AND the rest of the Tomorrow People actually participating.  Though I have to cast a glance at Cara needing a moral awareness check on her first day as leader – but even that is something of an aversion because usually it’s the female lead who is to fluffy-bunnyish while the male lead is busy killing all the things.